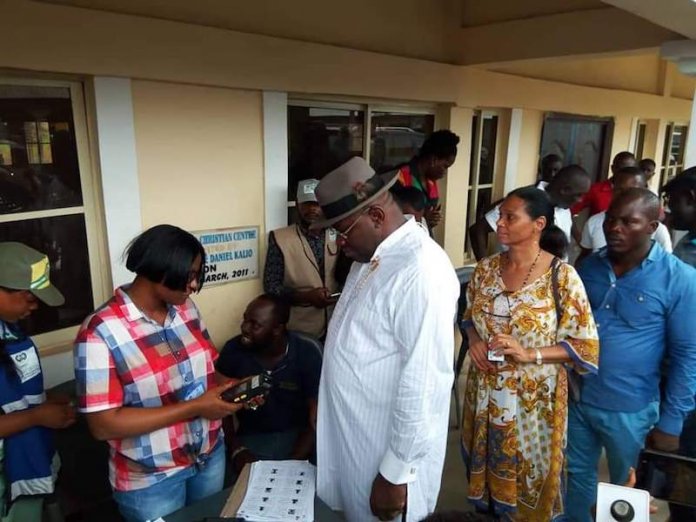 Bayelsa State Governor, Mr Seriake Dickson, has accused the Military and Indepedent National Electoral Commission (INEC) officials of colluding with the opposition to churn out fake results in the state House of Assembly election.

Dickson made the accusation while speaking with journalists shortly after casting his vote in his home town, Toru Orua, Sagbama local government area.

A statement by his Special Adviser on Media Relations, Fidelis Soriwei, quoted the Governor as saying that federal agencies deployed to the state are executing a plan to foist an unpopular political party on the state.

According to the governor, reports at his disposal indicated that several PDP members were prevented from voting in various communities including, Peremabiri, Okpoama and Bassambiri.

He stressed that the APC was resorting to brigandage because it lacked the support base to win election in Bayelsa.

The governor who described what is happening in the state as barbaric , criminal and undemocratic, flayed the Resident Electoral Commissioner in the state for his failure to enforce the electoral guidelines.

He said that it was a sad commentary on the nation’s security apparatus that it had failed to carry out its constitutional responsibility to provide the conducive environment for the citizens to cast their votes to elect their representatives and leaders.

The governor said that reports at his disposal indicated that soldiers carted away electoral materials in Epebu, Olodi and Ayakoro in Ogbia Local Government Area of Bayelsa State.

While calling on the people to remain calm in the face of unwarranted intimidation and harassment by soldiers, he assured that his administration would take appropriate measures to seek redress.

Governor Dickson further expressed regret over the militarization of the Niger Delta states and urged all well meaning Nigerians to stand up in defence of democracy.

His words: “We have major challenges in this state arising from militarisation and clear failure on the part of the agencies to do their jobs as it should be.

‘In Peremabiri in Southern Ijaw, several people, almost a thousand people couldn’t vote as they are now IDPs hiding in Yenagoa and other places.

“Criminals supported by the Nigerian military services have held the community hostage. Some security personnel who managed to get to Peremabiri were turned back and you ask me whether we have a nation within a nation.

“In Bayelsa, enclaves have been created by federal security agencies in connivance with APC leaders coordinated by Timipre Sylva all with a view to making Bayelsa State ungovernable. I keep raising this alarm.

“In Bassambiri, PDP leaders and followers were pushed out by force and they are now IDPs in Ogbolomabiri, Yenagoa and other communities. This is because the APC knows that they are not on ground in this state so they want to win by force.

“I have just received an alert that in Ayama Cconstituency, military officials are trying to overpower electoral officers to cart away materials so that they can write any result.

“And the REC and his team in our state have not demonstrated courage, professionalism, competence and respect for their own guidelines, all because they want to crown APC in Bayelsa by force.”