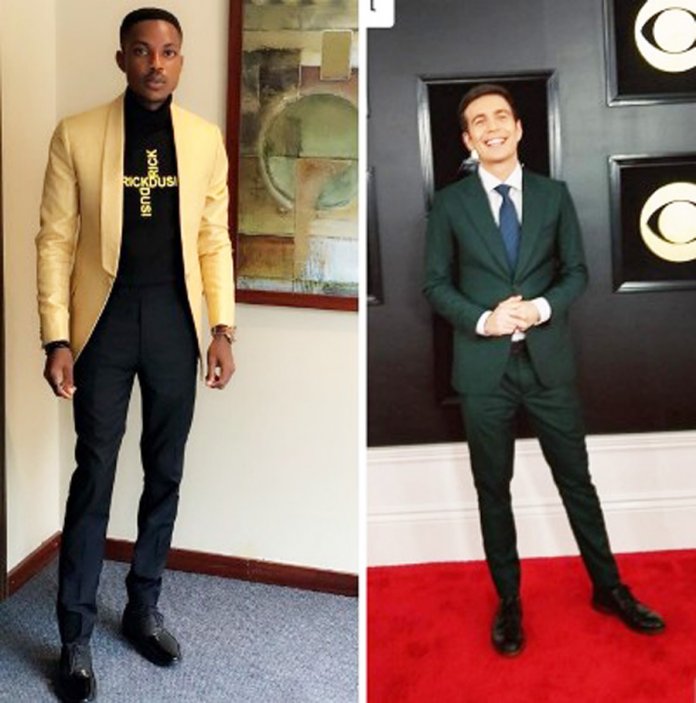 Rick Dusi by Patrick  Eromosele  Eidusi may not come anywhere closer to making the first list of Nigerian fashion labels when mentioned months back. But the young brand has sure attracted massive growth and recognition after it registered its name on the world stage as the first Nigerian designer to style a Grammy Awards winner and two-time nominee, Tim Kubart, at the just concluded 61st edition of the annual music awards held in Staples, Los Angeles.

The Creative Director who has styled some Nigerian celebrities attracted widespread attention to his brand after crafting the Grammys red carpet outfit for the American actor and musician. Kubart wore a green suit made by Eidusi that sparked conversations on the Nigerian deigner. It was reported he forgot to acknowledge Eidusi on the red carpet, and quickly sent out appreciation message that went viral through his Twitter account @timkubart.

“I regret not saying the name of the designer in this interview. I was overwhelmed by everything. But all respect to Rick Dusi,” he tweeted.

Eidusi, in an interview, had mentioned that he was ‘still in shock’ at the attention his brand has been getting since the Grammys. Narrating the buildup to the design, Eidusi said, “Bella Ndubuisi, who I haven’t met before,  saw the suit I crafted for my client in Canada. She reached out to my client about who made the suit for him.

“She mentioned my name to Tim Kubart, he saw my brand page on Instagram and he was satisfied with my work after which he contacted me.”

He also described the attention his young brand has been getting and expressed his amazement at the positive reactions, saying: “Since the news broke out, the reactions I have received have been amazing. I mean, my brand is quite young just three years and some months. Most people are quite shocked that such a young brand could actually achieve such feat.”

Kubart was nominated in the category for Best Children’s Album at the 61st Grammy Awards. Sometime last year, Kubart had visited Lagos to work with children through music and dance workshop with the United States embassy. It was a life-changing experience for him according to Eidusi so that prompted a desire in his choice. In his words to Eidusi, Kubart said “I will like a western suit but with Nigerian colours, made by a Nigerian designer”. This was after he had inquired about the bespoke brand.

Continuing he said, “At First I thought it was a scam until I did a little research about him and I discovered he had been a Grammy award winner and this was his second nomination for the Grammy Awards. I saw his passion, about being specific with the colour and the kind of suit he wanted me to craft for him for the Grammys. That also helped me believe my after thoughts.”

The Nigerian designer would take to his Instagram to share the good news, expressing the dream-come-true moment. He dressed the singer in a simple green suit, paired with a white shirt (in solidarity with Nigeria) and blue tie and the singer wore a bright smile to the occasion. Shortly after the epic moment on the red carpet, Kubart said: “We are here. Today I wear green and white to celebrate the incredible spirit and people of Nigeria. Thank you to the amazing Lagos designer @rickdusi for crafting this suit made of Nigerian fabric. Love to all of you today. So proud of my team and happy to have chosen this difficult and wondrous career of children’s music.”

Rick Dusi then posted his picture with the caption: “When @timkubart 2019 Grammy Awards nominated singer messaged me from Los Angeles to make him a suit because he was nominated for the Grammys I thought it was a dream. He told me he wanted a suit from a Nigerian designer, a simple and classic green suit. This is a dream come through dressing a Grammy nominee is everything, from Nigeria to Grammy red carpet. You may not have won Tim but you re our winner. Congrats Tim. We celebrate you. It feels good to know that my brand is being appreciated globally and we are doing a good job.”

Founded the brand in 2015, Rick Dusi is a contemporary minimal brand that designs for men and women that enjoys classic British tailoring and bespoke styles. Since starting the brand in 2015, the label has been able to make debuts in fashion weeks within and outside Nigeria. With his new status already reflecting on his Instagram profile, make no mistake of that because he is truly a “Grammy Awards Designer 2019”.