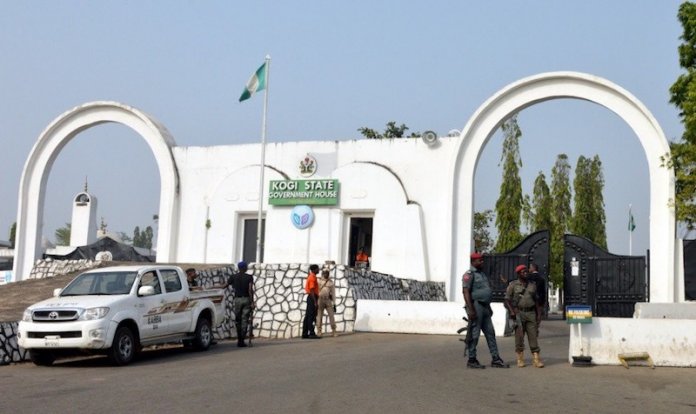 The experience of Friday February 15, 2019, when hooded thugs encircled the GRA, Lokoja home of former Governor Ibrahim Idris, while he was hosting the cream of the leadership of the Peoples Democratic Party (PDP) in the state, is very instructive.

It took a phone call from Gen. Tunde Ogbeha, a former senator representing Kogi West in the Senate, to put a call through to the Commander, Command Army Records, Lokoja, whose men arrived the besieged home of former Governor Idris in response to Ogbeha’s call and dismantled the thugs.

Information in the public domain, confirms that the masked hoodlums, merely took a walk into Government House, Lokoja, through the rear access, unchallenged.

It has been reported that a member of the Kogi State House of Assembly, Friday Makama, dared one of the masked thugs during the siege on leaders of the PDP in Kogi State, and indeed unmasked him. Makama was buoyed by the resolve of youths who accompanied their leaders to the venue of the meeting.

His bravery caused panic in the camp of the intruders who are reported to have been imported into Kogi State by Edward Onoja, Chief of Staff to Governor Yahaya Bello. That the thugs walked seamlessly into Government House, Lokoja, raises questions about who actually procured and assigned them.

This calls for immediate inquest by the security services, to preempt disorder and violence, before, during and after the elections.

There were reports that around the external surroundings of Government House, Lokoja, barricades were mounted by the same thugs after they had been dispersed by the Army. They reportedly shot at the vehicle tyres of AVM Salifu Atawodi, Senator Dino Melaye and two others, as they drove out of the venue of the meeting in Alhaji Ibrahim Idris’ place, in broad daylight.

One of survivors of the attack who spoke on the condition of anonymity, said their assailants were ‘masked, heavily bearded, with some wearing ear-rings.’

The general insinuation is that if there is no tacit backing from Government House, Lokoja, such brazen daylight assault by unknown gunmen could not have been contemplated.

Residents of Okene in Kogi Central senatorial zone where Governor Yahaya Bello comes from, had their night rest rudely interrupted by sustained and sporadic gunshots upon the arrival of Bello, the night before the rescheduled elections.

The shooting lasted through the night. The gunshots were reportedly fired by thugs dressed in police uniforms, procured from out of state and was intended to scare residents of the five local government areas in Kogi Central: Adavi; Ajaokuta; Okene, Okehi and Ogori-Magongo, from participating in the earlier scheduled Saturday, February 16 polls.

Kogi Central has been a major flashpoint in recent weeks and months. On New Year’s, eve for instance, attacks on supporters of the senatorial candidate of the Social Democratic Party (SDP) Natasha Akpoti, by suspected thugs of the All Progressives Congress (APC) in Kogi Central, led to the death of Ojo Enessi, a youthful SDP supporter. The Kogi State Commissioner for Water Resources, Didat Ozigi Salami and the Sole Administrator of Okehi LGA, Abdulraheem Ohiare, were fingered in the attack. Two suspects, Ismaila Kashim and Abdullahi Suleiman, were arrested by the police in connection with the murder. They were transferred to the Kogi State police headquarters in Lokoja, but subsequently released on the instructions of Edward Onoja, who reportedly drove personally to the state police command to take them.

An attack on the vehicle of former Kogi State Commissioner for Finance, Biodun Ojo, in Ijumu LGA, Kogi West senatorial zone, in the course of a political procession by the PDP, was reportedly orchestrated by Taofiq Isah, the Sole Administrator of the local government.

During the Lokoja/Kotonkarfe House of Representatives by-election last year, even the Speaker of the State House of Assembly, Matthew Kolawole, was pictured leading armed thugs to attack innocent voters in the more rural communities in Lokoja LGA.

Kogi State has been a flashpoint of recurring security developments capable of undermining the forthcoming polls in recent weeks.

Just last week ago, Thisday broke the news of the procurement of three motorised, heavy duty communication jamming equipment by the Kogi State government, for the sole purpose of distorting realtime communication on election day, as thugs and election manipulators will hope to compromise the figures from the election. Spokesman to Governor Bello, Kingsley Fanwo, confirmed the procurement of the classified equipment, even as he argued they are ‘specifically for the use of the governor.’

Barr Kola Ojo zonal chairman for the Peoples’ Democratic Party, PDP, in Kogi West, had instituted the legal action upon insistence by the Resident Electoral Commissioner in Kogi State, Prof James Apam, that he would maintain the status quo he inherited, a resolve viewed with suspicion by Kogi West constituents, against the backdrop of the daylight rape of popular votes in the Lokoja/Kotonkarfe by-election.

Justice D.U. Okorowu of the Federal High Court, Lokoja, who ruled on the matter, citing the the 1999 Constitution of the Federal Republic of Nigeria, said the fact that a mistake had been repeatedly made for 20 years since 1999, is not substantiated by the Constitution. He said only the National Assembly can change the extant provision.

The security services have usually demonstrated courage in taking in potential aggressors whose misdemeanour may obstruct the public peace and impugn national security at times like this.

As governorship candidate on the platform of Peoples’ Progressive Alliance, PPA, in Abia State in 2007, Theodore Ahamaefule Orji, who was later to become governor, was in police custody. Even as a former deputy governor and senatorial candidate in Osun State, Iyiola Omisore, was held in custody, for conduct inimical to public peace.

The Acting Inspector-General of Police, Adamu Mohammed and the Director-General, Department of State Services, Yusuf Magaji Bichi have thus far demonstrated commitment to professionalism.
This must be brought to bear in the security situation in Kogi State.