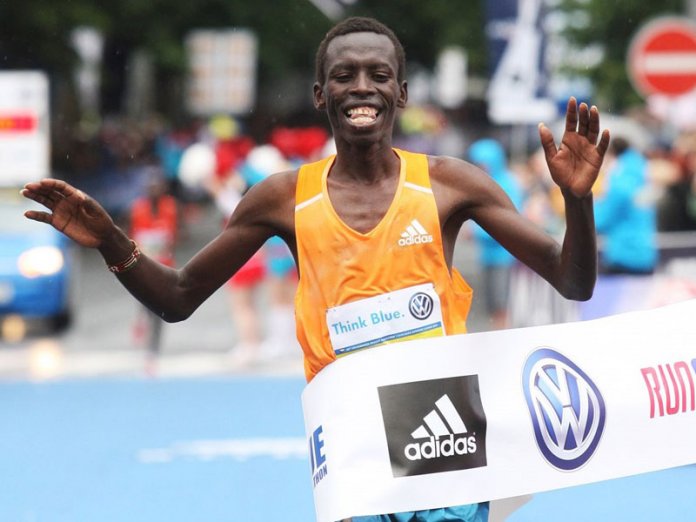 Tomorrow morning, the city of Lagos will be at standstill again as some of the best road runners from across the world converge on the former federal capital for the 2019 edition of the Access Bank Lagos City Marathon.

Already, the organisers of the race that has now put Lagos on the global map of cities with great marathons like London, New York, Chigaco, Boston, Berlin e.t.c, announced yesterday that most of the expected gladiators have arrived Lagos and waiting for the flag off.

Predictably, most of the top runners who will be gunning for the star prize of $50,000 are from Kenya, Ethiopia, Morocco, Uganda, Australia, USA and Poland among many other countries that would be running on Saturday.

This morning at the Sheraton Hotel in Lagos, most of the top runners in town like 29-year old Kenyan runner, Patrick Kipyegon Terer, Moses Kigen Kipkosgei, Agnes Jeruto Kiptocich, Herpa Almenesh Guta and others will be unveiled to track & field reporters.

Olukayode Thomas, Head of Communications and Media for the Access Bank Lagos City Marathon told THISDAY during the week that the strong cast of runners for this year’s marathon is a big plus.

“The elites athletes have arrived, it is a big plus that the Access Bank Lagos City Marathon is commanding this number of quality athletes. This we believe should help in our quest to improve the classification of the race to a silver label very soon,” observed Thomas who for many years reported track & field for The Guardian.

All eyes will be on Terer who has won races across the world from Prague to Turin in Italy and has equally fared well in other international races in Israel, France, China and Canada among many other places.

Also in town is Kipkosgei who finished in third place at the 2010 New York Marathon.

Also, Kiptocich, the runner-up at the 2017 Paris Marathon will be hoping to dethrone Herpa Almenesh Guta who won the women’s race at the 2018 Access Bank Lagos City Marathon edition.

Nigeria’s elite road runners are not going to be left out of the party as some of them are hoping for a slip from the East Africans for them to get the chance of walking away from the Eko Atlantic City, the finish point with cool dollars in their pockets.

Nigeria’s Long Distance Races Coach, Nuhu Stephen, insists that despite the huge gap between the top runners from abroad and his Nigerians wards, “with time, this Access Bank Lagos City Marathon will help my athletes close that gap. Before we had no opportunities of competing with these stars from East Africa however things are changing now.

“We just hope more corporate bodies will look in the direction of the marathon runners in the country and help us with sponsorships. Our athletes can match the Kenyans and Ethiopians with the right training and facilities,” observed the Plateau-born coach.

Meanwhile, while many are already aware that the duo of D’Banj and Teni will be performing at the finish point of Saturday’s race, another energetic performer based in the United States, Brite Benson a.k.a Local Boy, has been added to the list of artists that would thrill the fans.

Benson who is returning to Nigeria after almost 17 years in America said he is in town majorly for the Access Bank Lagos City Marathon and he is eager to unleash what he has for the Lagos fans.

“Yes, I am in Nigeria just for this, I paid my way here to support the Lagos Marathon and to also showcase by talent to Nigerians,” he said.

An Afro-pop artist, the ‘Local Boy’ as he is fondly called revealed that he has done a couple of songs with both American and African artistes; including the likes of CDQ, Davido and D’Banj.

Lagos fans will have the honour of being the first set of audience in the world to listen to the new single ‘Sokoyokoto’ just released by Local Boy.