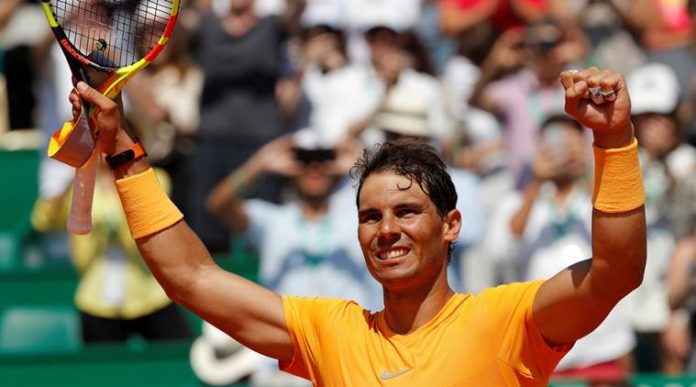 Rafael Nadal maintained a perfect score of not dropping any set so far as he shut the door against one of the future of the game, Stefanos Tsitsipas, at the Australian Open and silenced his hordes of new fans.

The Spaniard cracked 28 winners, breaking Tsitsipas’ serve six times and only facing one break point himself.

He will play either top seed Novak Djokovic or France’s Lucas Pouille – who meet today – in Sunday’s final.

“It was a great match, it has been a great tournament and I have played very well every day,” Nadal said.

Nadal, who triumphed at Melbourne Park in 2009, is one more victory away from winning all four Grand Slams at least twice – a feat which no other man has achieved in the Open era.

Serbia’s Djokovic is also chasing a slice of history as he bids for a record seventh men’s singles title, although he must first beat Grand Slam semi-final debutant Pouille.

After a number of injury problems, Nadal is playing his first tournament since losing in last year’s US Open semi-finals.

The world number two pulled out of the Brisbane International earlier this month with a thigh strain and the move has paid dividends for the 17-time Grand Slam champion.

“To start the season like this when a few weeks ago I was in Brisbane having to take a tough decision not to play there, it is difficult to imagine where I am today,” Nadal said.

“But I never stopped practising. That week of practice made me feel good.”

Nadal has looked sharp in his six matches on his way to the final and has still not dropped a set.

He has played three players – Alex de Minaur, Frances Tiafoe and now Tsitsipas – who are aged under 21 and competed in the Next Gen finals.

“They don’t need me to send them a message – they are good,” he said.

“It is always a big challenge to play against them. They are a young and new generation that are already here fighting for the most important things.”

Tsitsipas, playing in his first Grand Slam semi-final, was the highest-ranked player Nadal had faced this fortnight but, with his service game and famed forehand tuned in from the start, the Spaniard had no concerns.

Nadal won 100% of the first serves he landed in the first set, backing that up with a strong 63% on his second serve, allowing him to put pressure on Tsitsipas.

After Nadal broke in the third game for a 2-1 lead, Tsitsipas produced two double faults and the Spaniard pounced for a 5-2 advantage before serving out the opener in 31 minutes.

Tsisitpas, who cut a forlorn figure in his post-match news conference, has “everything to become a great champion”, according to Nadal.

“There are not many reasons to be down when you have started the season like this, even if is normal just straight after the match not to be happy,” he said.