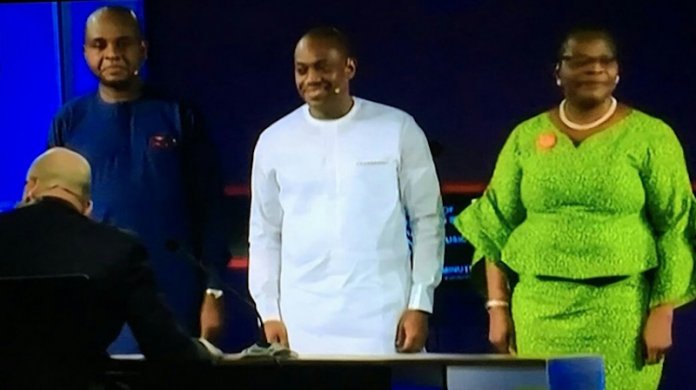 The go-to-rant social media platform Twitter brimmed with caustic opinions over the absence of President Muhammadu Buhari, who is the presidential candidate of the All Progressives Congress (APC) and his counterpart, Alhaji Atiku Abubakar of the Peoples Democratic Party (PDP) at the presidential debate organised by the Nigeria Election Debate Group and Broadcasting Organisation of Nigeria.

Google Trends ranked the presidential debate as one of the most searched topics on Saturday, owing to outbursts on Twitter.

The Twitter firestorm can be classified in three parts: pro-Buhari, pro-Atiku and others

Initially, Buhari’s campaign team hinted that the president may not attend the debate which of course is not constitutionally mandatory. After all, the president had an interactive session with Kadaria Ahmed days before the scheduled debate where he gave his thoughts on some of the burning issues in the economy and his plans for the next four years, if reelected. That interaction too generated some interesting reactions on Twitter but that will be a discussion for another day.

That earlier decision to ignore the debate was challenged by Atiku who said he will only be at the debate if Buhari attends, which, in a way makes sense. What is the need of attending a debate when your main opponent is missing?

On Twitter, the pro-Buhari followers mocked Atiku for walking out of the debate simply because Buhari wasn’t available. They queried the intention of the PDP presidential candidate. Was it to intimate the public on his plans or to attack the president?

Pro-Atiku followers, on the other hand, thumped their chest and flexed their muscles that their candidate despite his busy schedule still made it to the Transcorp Hilton venue of the debate. They queried what excuse Buhari supporters may have. They concluded that Buhari is too weak to run the country, while Atiku is not.

The others who cut across the followers of the presidential candidates of the Allied Congress Party of Nigeria (ACPN), Dr. Oby Ezekwesili, Youth Progressive Party (YPP), Prof. Kingsley Moghalu and the Association for New Nigeria (ANN), Mr. Fela Durotoye mocked the two dominant parties in the election for failure to show up, stating that Nigerians do not need old men to rule them anymore.

Truth be told, each group made a valid point.

The president had no concrete excuse to miss that debate, an opportunity for him to prove to the people why he indeed deserves a second chance. It is not the first time Buhari missed an opportunity to redeem his image. Last year, during the French president, Emmanuel Macron’s visit to Nigeria, the president failed to use Macron’s visit to Afrika Shrine, home to votaries of the Afrobeat legend Fela Anikulapo-Kuti to reconcile with the family as well as Nigerians. Apart from that, the president’s image makers could have leveraged on the opportunity of the debate to redeem the president’s brand. But again, pride reared its ugly head.

Atiku’s show of commitment would have earned him extra points if he had participated in the debate. By leaving the venue just as Mark Eddo, the moderator of the debate was about to introduce him showed pride.

His abrupt departure also spoke volumes of his willingness to compete but that was poorly executed.

Apart from the mudslinging that characterises debate, a fundamental part is the salesmanship of the candidate. Atiku could have still participated in the debate, intimated the public on his policy document and attack his opponent while measuring the strength of the new faces.

If anything, Ezekwesili, Moghalu and Durotoye have managed to convince majority of Nigerians that they have the clout to rule the country. Their ideals may be musical to the ears, but their input will ultimately be measured at least by the first 100 days in office, that is, if elected. What Atiku and Buhari’s absence from the debate has provided for these new candidates was a golden opportunity to sell their brand to Nigerians.

Seriously, Nigerians shouldn’t be having an headache over the debate because it won’t determine the outcome of the elections. We are not Americans where such platforms could sway voters to candidates. No! The political class is very familiar with other methods of winning votes, by hook or by crook. Whoever is in power, to a large extent, compels the odds to work in his favour.

Notwithstanding, things may take a different turn as the shift in voters behaviour is becoming imminent every day. The recent outburst on Twitter is an indication that Nigerians truly need a change in government. Unlike the past when the country was presented with two evils and forced to choose the lesser evil, there are other options to consider. In this case, Ezekwesili, Moghalu and Durotoye equally stand a chance. On that debate platform, they looked like a unifying force that may sweep the dominant parties into obscurity. Perhaps that may play out in 2023. After all, APC followed such a model to emerge victorious in 2015.