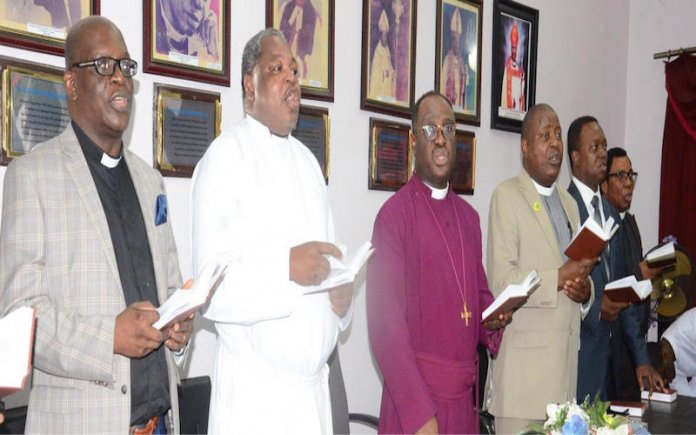 Activities marking 100 years of the Diocese of Lagos Anglican Communion kicked-started on a sober note as the diocese rolled out its drums for the one-year long celebration holding from January to December 2019 with series of events. Mary Nnah writes

The ceremonial splendour of the centenary celebration of the Diocese of Lagos Anglican Communion took off with a certain level of sobriety as members of the diocese started off with a 14-day fasting and prayer session, thanking God for what He has done over the years, in addition, seeking for His leading and presence as they hold the year-long activities to mark the diocese’s 100 years of existence.

So, in a sober moment, the diocese commenced the celebration with a 14-day fasting and praying, which was rounded off on Tuesday, January 15, with a mega prayer convention held at the Cathedral Church of Christ, Marina, Lagos.

Speaking in Lagos, Wednesday, during a press briefing to announce activities marking the diocese centenary anniversary celebration, the Lord Bishop, Diocese of Lagos, Anglican Communion, Rt. Rev. Humphrey Olumakaiye, urged Nigerians to pray fervently for hitch-free elections and peace in the nation even as they prepare to cast their votes in the forthcoming national elections.

The cleric revealed that the diocese is planning to have a convention ground somewhere in Lagos, noting that, “inside the convention ground, a place will be carved out as “Garden of Gethsemane”, which shall be place of prayer for individuals to pray and get answers to their prayers.”

He said further that the diocese will continue to impact the society positively and influence the nation for good, while it will also continue to collaborate with the government in making life worth living for people. He added that the diocese even prays that the forthcoming election in Nigeria will be peaceful and also, credible leaders will be elected.

The Diocese of Lagos Anglican Communion, inaugurated in the year 1919 as the first Anglican Diocese in Nigeria, clocked 100 years this year and the celebration runs from January to December 2019. And precisely by December 10, 2019, the diocese shall hold the grand finale of the centenary celebration.

Other activities lined up to mark the100 years anniversary is the unveiling of the Centenary Logo and the Centenary City which holds on January 26 at the City Hall, Catholic Mission Street, Lagos by 6pm while on February 23 at the Cricket Pitch, TBS, the centenary rally will hold and this will involve all the members of the diocese and even Anglicans across the length and breadth of the nation, who are going to come together for the rally.

Olumakaiye said further that as still part of the celebration, there shall be, “Centenary Diet- a 40 day special journey in the word of God between March 6 and April 20. “We want to go deep into the word of God. We want to expose our members to the living word of God. So we are having 40 days of intensive study of the word of God”, he added.

On April 28, the Diocese will hold the Centenary Festival of Hymns at Our Saviour’s Church TBS, Lagos from 4pm. Also there would be a Nehemiah’s Summit, another great platform for open discussion on the journey so far – after 100 years, what next?

According to the cleric, this is going to be a great platform where all Anglicans across the nation will gather at Our Saviour’s Church TBS, Lagos by 9am.

The centenary Synod will come up around May 5 to 9 at the Anglican Cathedral Marina, Lagos, Our Saviour’s Church TBS, Lagos and the Faith Plaza and at the Synod these years, the diocese will be considering “The Fate of Our Fathers after Hundred Years”.

The centenary celebration will continue with the Children’s Camp from August 7-10 at the Faith Plaza while the Memorial 21 Days fasting and praying will hold from August 1-21 in all churches, which would be rounded off with a Mega Prayer Convention on August 21.

There would be Choir Festival and Competition in September. The month of September will also witness the Bishop Cup/Football Completion matches. The Centenary Health Week in all the parishes will come up between October 13 and 19 as organised by the Diocesan Health Commission.

Furthermore, the Centenary Gallery of after hundred years, will come up on November 2, this will be followed by Lagos Citywide Unity Crusade from November 27 to 29.

The Centenary Cultural days which holds on November 30 will be followed by the anniversary lecture come December 4. Coming closely will be the Festival of Faith on December 7.

Another major event on the line up is anniversary thanksgiving, which comes up on December 8 and then on December 9 will be the Gala Night where heroes and legends of Lagos Diocese will be celebrated. Holding at the Harbour Point Vitoria Island, Lagos the day will witness awards to deserving members of the diocese – those both dead and alive, that have contributed greatly to the development of the diocese and finally, the grand finale of the centenary celebration, which has the theme, “Stronger, Deeper and Higher”, will take place on December 10, at the Cathedral Church of Christ, Marina, Lagos, where the diocese will be holding the centenary thanksgiving.

After a hundred years, the diocese deemed it fit to give back to the society, thereby adding value to people’s lives. To this end, plans are on ground to build a mega city that would be all-encompassing.

“In our bid to give something greater back to the next generation that will forever be cherished as we have cherished the diocese given to us 100 years ago, we have decided to build a Centenary City between Lekki-Ibeju-Epe axes. We have already got the land and right now we are trying to tidy up things. It is going to be a vast land of about 2000 plots of lands”, Olumakaiye said.

The initial amount to be expended to achieve the planned mega city is estimated at N5billion. “Any moment from now, we would move to site in a bid to actualise this dream and you know, if you can see beyond the invisible, you would do the impossible. We are a royal people and this is a huge project that we are passionate about as a diocese and we want to actualise this dream by the grace of God. Anglican Communion is great and well-structured and we want to thank God that we have the people that God has so much blessed us with. And we discovered that our leaders were not extravagant at all.

“All God has blessed us with; we have given back to the society. When you look around you would discover that it is only established churches like the Anglican that has made impact in the development of our community. We have schools around, hospitals and so on and we are not interested in acquiring wealth for ourselves because we believe that we are all on a borrowed seat and so we are not so attached to this world and that is why you see us this way.”

He said this wasn’t the first time that the church would be doing such, but they just intend to make this particular project outstanding.

“We have projects of this nature all over the country but we just want to make this particular one very unique. It is a huge project and for a start we are committing N5billion into it. And by divine grace of God, we are going to raise the fund internally by the members of our church and we pray God to help us. God is still in the business of creation and He is ready to make use of us to bring something great back to the society and to make our environment worth living”, the cleric said.

Speaking on the significance of anniversary’s theme, “Stronger, Deeper and Higher”, to individuals and the nation as large, he said, “We are looking back from where we started, where we are and where we hope to be. And I believe that if our leaders are led by God in running affairs of country, the nation would be better for it.”

“I mean, you, can see that after 100 years, the Anglican Communion is still growing Stronger, Deeper and Higher, despite all the persecutions over the years. That is how you know a growing church. Many of the new generation churches that started a few years ago have vanished but for us after 100 years, we are waxing stronger. And we shall continue to grow higher and higher”, he said.

Olumakaiye quickly seized the opportunity to thanks all the eminent people, philanthropists and individuals who have so committed to the greatness of the diocese. He made special reference to Gen TY Danjuma, who also happens to be to the grand patron for the centenary celebration.

Meanwhile, as the diocese pioneers yet another first in the country, their prayers was that God should see them to the end of the project and that the diocese will continue to remain on top as the ray of hope and symbol of leadership in the nation.