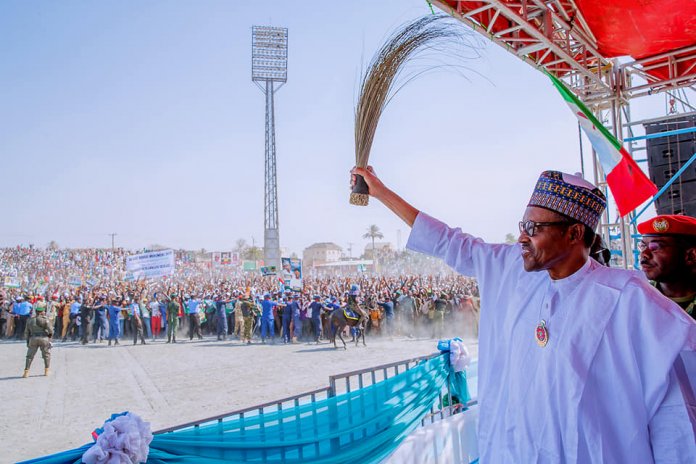 By Omololu Ogunmade in Abuja
Coalition of Progressive Political Parties Friday in Abuja  endorsed the candidacy of President Muhammadu Buhari for February 16, 2019 presidential election.
A statement by Special Adviser to the President on Media and Publicity, Mr. Femi Adesina, said the president who received members of the coalition in the State House, remarked that he respected their “consistency, firmness, integrity and steadfastness.”
Adesina also quoted the president as saying, “I am happy with your decision to continue to support us. I respect your consistency from 2015 to date.
“Your belief in one Nigeria is admirable. This visit has raised my morale; you support us quietly, without noise, and it encourages us to press on.”
The statement added that the leader of the coalition, Bashir Yusuf Ibrahim, stated that endorsing the president for a second term in office was spurred by “the many successes of the administration, including, strides in the fight against insurgency; efforts to redress the country’s huge infrastructural deficit; and the yeoman’s fight against corruption, among others.”
It also said Ibrahim pledged that the coalition would campaign for Buhari round the country, confront fake news with facts and figures and added that a formal declaration of their support would be made soon.
The statement listed members of the coalition to include: Advanced Allied Party; Africa Peoples Alliance; Freedom & Justice Party; KOWA Party; New Progressive Movement; Peoples Democratic Movement and Accord Party.
Others were Sustainable National Party; New Nigeria Peoples Party; Unity Party of Nigeria; United Progressive Party; National Democratic Liberty Party; Nigeria Elements Progressive Party; and Yes Electoral Party.