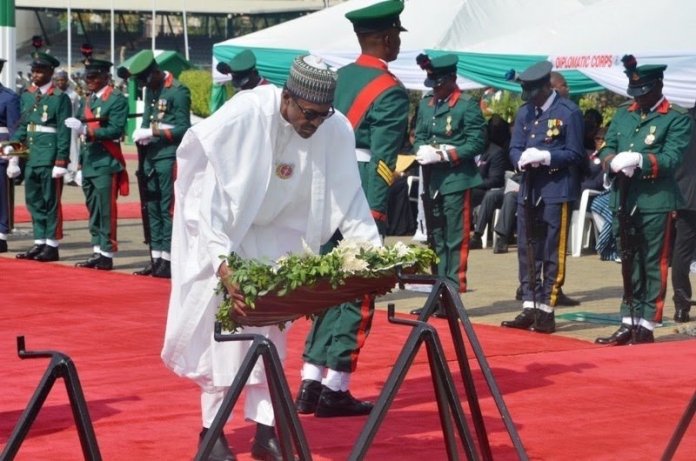 Chiemelie Ezeobi writes that as Nigeria marks the annual Armed Forces Remembrance Day, which is set aside to celebrate fallen heroes who died in the line of duty, there is an increasing clamour for the government to truly ensure the welfare of officers and men of the force

The 10th line of Nigeria’s National Anthem reads thus; ‘the labours of our heroes past, shall never be in vain’. Given this, one would expect that indeed the heroes on whose blood, sweat and back this nation was built, would not be forgotten. The opposite however, seems to be the case.

Nonetheless, the Armed Forces Remembrance Day (AFRD), is marked
every year, on January 15, as a day set aside to celebrate the fallen heroes, who died in the line of duty while fighting to ensure the territorial integrity of the nation, whether on land, air or water is not breached or tampered with.

This year is no different. As the nation makes the remembrance today, one thing remains the crux- the welfare of soldiers and men, who are at the forefront in the war against insurgency in the North-east, herdsmen killings in the Middle-belt, Militancy in the South-south and other pockets of violence that has been rocking the nation simultaneously.

According to Wikipedia, in Nigeria, the Armed Forces Day, also known as Remembrance Day, is celebrated every January 15. It was formerly celebrated on November 11 of every year to coincide with the Remembrance Day (Poppy Day) for the World War 11 veterans in the British Commonwealth of Nations, but it was changed to January 15 in Nigeria in commemoration of the surrender of Biafran troops to the federal troops on January 15, 1970, thus concluding the Nigerian Civil War that sought to tear apart the unity of Nigeria.

Significance
The Armed Forces Remembrance Day celebration as an annual event organised to honour members of the Nigerian Armed Forces who fought for the nation, and those who served or are still serving in various peace support operations worldwide, as well as those who fought in the Nigerian civil war, is quite significant.

The event is held at the federal, state and local levels where either serving military officers reside or where living ex-service men occupy.

Symbolisms
In commemorating the day, several military traditions are strictly adhered to. Whether marked at the federal, state or local level, some symbolisms are sacrosanct and they include the release of pigeons to symbolise peace, placing of wreaths, playing of the last post, Remembrance Day parade, shooting of guns. Besides the above listed, the event also witnesses religious services in both mosques and churches nationwide.

At the parades, the military personnel are usually kitted in diverse colours typical of their services be it navy, air force, army or ex-service men.

Preparations
A while back as October 2018, the federal government set the ball rolling in preparation for the event. Accordingly, the Ministry of Defence (MOD) had last year inaugurated a 25- man national planning committee as part of preparations to celebrate the 2019 AFRD celebration.

The Permanent Secretary MOD, Mrs. Nuratu Batagarawa, while inaugurating the committee, had explained that the event was in honour of members of the Armed Forces of Nigeria who had laid down their lives in the defence of territorial integrity.

Batagarawa said the servicemen and women were also being honoured for promotion of global peace as well as those who had suffered setbacks as consequence of their participation in war.

Prelude
Also the Minister of Defence, Mansur Muhammed Dan-Ali in a press conference had outlined the activities lined up for today’s commemoration.
After the press briefing which he held to herald the 2019 AFRD, the next line of action was the Nigerian Legion Humanitarian Day, which held on October 19, 2018 at the Legion House, Area 3 Garki Abuja and legion offices in all states of the federation.
The event involved community service by the veterans as well as empowerment of widows and orphans of fallen heroes.

On October 30, 2018, the emblem launch was done by President Muhammadu Buhari, at the Council Chambers, State House, Abuja. The launch set things off in motion as the sale of the emblems was done across the country. Proceeds of the sale of the remembrance emblem are deposited to the Nigerian Legion, a body of veterans.

From then to January of 2019, underground preparations were in full swing, which culminated into the Jumma’at Service on January 11, 2019 at the National Mosque, followed by an inter-denominational service at the National Christian Centre, Abuja on Sunday January, 13, 2019. All these events took place simultaneously in all the states.

The wreath laying ceremony, which is the peak of the celebration, will see the president and other dignitaries lay wreath at the National Cenotaph in Abuja, today. This will also be done simultaneously by governors in their respective states.

President Muhammadu Buhari while speaking on the prelude of the AFRD said it forcefully reminds one of the resolve of the citizens to remain in one united country, Nigeria.

He said: “It also points out the fact that we had been through a bitter and unfortunate war that led to the loss of millions of our compatriots and the need to do all within our powers to avoid a reoccurrence of war.”

While expressing regret on the recent murder of two young and promising aid workers; Saifura Khorsa and Hauwa Liman by Boko Haram terrorists, he added, “it is painful that this happened despite all the efforts of government to effect release of the two victims. We condemn the callous and cowardly act in its entirety and call on all citizens and friends to forge a united front against this common enemy of our destiny.
Once more, I extend the heartfelt condolences of the government and people of Nigeria to the families and friends of these martyrs.”

One of the highpoints of each AFRD is the prominence given to the Nigerian Legion, an association of ex-servicemen, i.e former members of the army, navy and air force.

The legion was established for the veterans because after retirement, they often discover that there are no jobs for them. Thus, the legion helps them to integrate into society. The law also backs them to operate certain businesses in order to raise money for its members, or serve as security guards at government establishments or raise money through the sale of AFRD emblems.

Still at the prelude of the d-day, Buhari had lent his voice in clamouring for support not just for the armed forces but also for the legion. He had called on other corporate organisations to borrow a leaf from the noble initiative as government alone cannot satisfy all the needs, given her limited resources.

He said: ‘‘Some airlines operating in Nigeria offer discounts to members of the Armed Forces. This gesture is commendable and in line with my call for recognition, consideration and appreciation of our Armed Forces.
I urge more business ventures to chip in by assisting the security forces in whatever way they can.

‘‘As Grand Patron of the Nigerian Legion (Veterans), I wish to pledge my continued support and that of the Federal Government to the organisation. My appreciation goes to state governors who are patrons in their respective states for the support they are giving to the legion. I enjoin them not to relent but improve on this.”

On what his ministry is doing to improve the lot of families of fallen heroes, the minister of defence was recently quoted to have said that he has inaugurated a Defence and Security Think Thank Committee to analyse and advice the government on how best to address, threats as well as critically evaluate the security agencies in handling emerging scenarios.

Outlining the policy reforms embarked on by the ministry to improve the lives of serving and ex-service men he said they include the review of the ‘Nigerian Legion Act’, which he said the ministry has forwarded a bill for the review.
According to him, the bill has provision for institutionalising the provision for welfare needs of the veterans in line with International best practices.

On ‘Pension Administration’ he said that at the root of catering for the welfare of the veterans was the payment of monthly pensions, adding that to this end, the Military Pensions Board had continued to deliver on regular pensions, adding that the periodic verification exercises carried out by the board is to ensure that sharp practices are reduced to the barest minimum.

Speaking on the ‘Defence Health Insurance Scheme’ he said the Defence Health Maintenance Limited has continued to provide health insurance service for veterans, widows and eligible dependants of the fallen heroes.

On the collaboration between the Nigerian Legion and National Personal Asset Acquisition Scheme (NAPAAS), a private sector driven scheme, he said it would afford the legionnaires the ability to purchase both household and agricultural commodities at affordable and discounted prices within a flexible and structured repayment plan across the country.

Another burning issue that the AFRD usually throws up is the welfare of soldiers, especially those deployed to the battle front. Each day, reports filter out about the increasing disenchantment of soldiers in the war front.

In virtually all the areas where soldiers are battling the Boko Haram insurgency, the main complaints have been the inadequate welfare packages, obsolete weaponry, weak tactics and strategy, amongst others. Unsurprisingly, this has led to low morale among troops, especially with the recent resurgence of Boko Haram, whose stock in trade now is to invade military bases and units.

Expectedly, with the recent wave of terrorists who seemingly have more sophisticated weapons than the troops, cases of soldiers going awol abound. From past reports, the soldiers had often complained that the terrorists have night vision goggles, rocket-propelled grenades and bomb-resistant armoured personnel carriers and trucks.

Sadly, in most attacks on military bases, these terrorists often make away with military equipment and even weapons to boost their armoury.

Another major demands by the soldiers is that of their sleeping conditions and food. According to them, they often sleep in the open air
because of the inhabitable nature of their make-shift tents. On the quality of meals, they lamented that it was poor to state the least, in addition with the lack of potable water they are forced to drink.

In all these, they noted that they might have made do if only their allowances are paid as at when due, a claim that the military authorities have refuted countlessly.