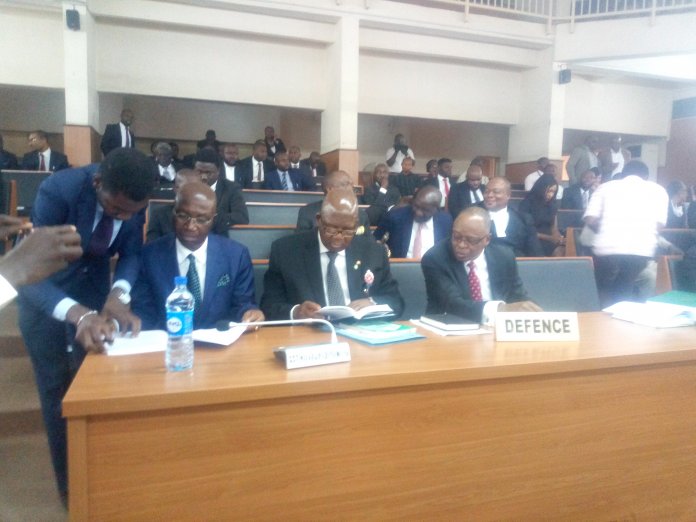 By Alex Enumah in Abuja
Foremost Senior Advocates of Nigeria, Chief Adegboyega Awomolo, Wole Olanipekun, Chris Uche are already seated in court to defend the Chief Justice of Nigeria (CJN), Walter Onnoghen, who is scheduled for arraignment this morning for alleged failure to declare his assets as required by the law.
The Federal Government would be prosecuting the CJN on a six count criminal charge bordering on non-declaration of his assets.
The arraignment according to the spokesman of the CCT, Ibraheem Al-Hassan, was sequel to an application filed by the Code of Conduct Bureau (CCB) to the CCT Chairman for the trial to commence against the Chief Justice of Nigeria.
He added that service of summons had been effected to the Defendant.
However Senior advocate of Nigeria and constitutional lawyer, Sebastine Hon, who joined other legal luminaries to condemn the scheduled arraignment of the CJN, had hinted that over 150 SANs were willing to rise in  defence of the CJN, noting that it was an attack against the judiciary by the executive arm of government.
As early as 8.20am more than 10 Senior advocates could be seen already seated on the side of the defence.
They include Sebastian Hon, Ugwu Onoja, Machukwu Ume amongst others.
While it appears that Chief Awomolo may likely lead the defence team of the CJN, Senior Advocate of Nigeria, Aliu Umar, is also sighted on the side of the prosecution probably as lead prosecution counsel.