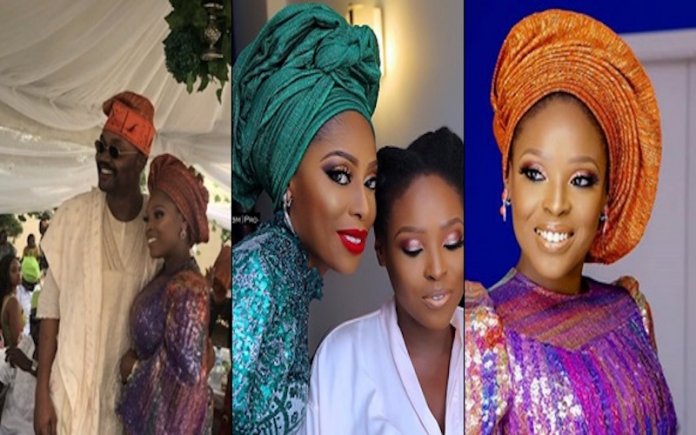 The first leg of the wedding ceremony between Temidayo Teniola Abudu and Adebola Teslim Imohiosen Makanjuola kicked off with an Introduction (Writing-in), place on Saturday 5 January 2019, in Abeokuta, Ogun State.

The bride is the daughter of Mosunmola Abudu (aka Mo Abudu), the globally celebrated television mogul, corporate titan and CEO of EbonyLife TV and Tokunbo Abudu, a prominent lawyer and businessman.

The bride’s paternal grandfather, Chief Olatunde Abudu, legal luminary and astute businessman, played host to the guests at his expansive mansion in Abeokuta.

The groom, Adebola is a Project Manager at Visionscape Nigeria. He holds a Bachelor of Arts degree in International Business/Trade and Commerce from University of Portsmouth in the United Kingdom; and a Master of Arts in Global Business Management and Leadership from Regent’s University, London.

The groom, Adebola is the son of Chief Oluremi Muyinudeen Makanjuola, the chairman of Caverton Group and Lady Cassandra Omage. A seasoned banking professional, Makanjuola ranks prominently on the upper rung of Nigeria’s elite ladder of successful and wealthy businessmen. Described as a very industrious and enterprising man, some of Makanjuola’s business interests include Caverton Helicopters established in September 2002 as a charter, shuttle and maintenance company. Makanjuola was at the event with his wife, Chief (Mrs) Yoyin Makanjuola, a veteran educationist.

Temidayo and Adebola got engaged last August. The traditional and engagement ceremony has been slated to hold in March, while the white wedding will hold in the United States during the summer.

Friends and associates of the couple’s parents were also on ground to lend their supports.