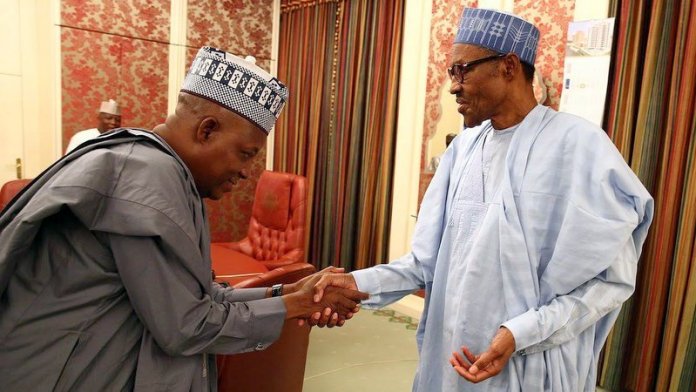 Borno State Governor, Alhaji Kashim Shettima, yesterday met with President Muhammadu Buhari in Abuja and wept profusely over unrelenting devastation of his state by Boko Haram terrorists, asking the president to do more to save the people from destruction by the terror gang.

The governor led a delegation of Borno elders to the president a week after he met, in Maiduguri, the state capital, with stakeholders in the state, telling them that the insecurity situation was dire and required extra commitment on their part to ward off the terrorists’ offensive.

Relating the devastation in the state, to Buhari yesterday, Shettima could not fight back the tears as he chronicled the deadly activities of Boko Haram since 2013 and noted that the recent destructive acts of the terrorists were only comparable with what he described as the worst times of 2013, 2014.

According to him, the state’s recent experience is a major setback in the fight against insurgency in the North-east.

Shettima, however, said the delegation had not lost hope in Buhari’s ability to win the war against terror and restore normalcy to Borno State.

Amid tears, like a child, who was deprived of his beans cake, he told the president that the delegation came to present 10 requests, which he appealed to journalists not to make public.

A statement later by Special Adviser to the President on Media and Publicity, Mr. Femi Adesina, said Buhari reasserted his administration’s unwavering support to equip the military to overcome the insurgency in the North-east.

He said the president also told the delegation that the collective safety and security of civilians would continue to remain paramount in the administration’s strategy to restore peace and stability in the region.

‘‘Having been a former Governor in the North-east, a GOC in the region and very familiar with the terrain, I assure you that as Commander-in-Chief, I’ll raise the standard of the Nigerian Armed Forces and get the resources to encourage them to do better than what they are doing,’’ he said.

The president told the delegation comprising political, traditional, religious, women and media leaders in the state that he was impressed by their leadership roles and participation in helping the government deal with the insurgency in the North-east.

The statement added that the president commended the contributions of the stakeholders from Borno State particularly the need for more air support for troops on the ground and coordination among different security agencies.

“I am getting at least a weekly situation report from the services and of course from other sources. I encourage the commanders to remain committed,’’ he said.

It also said Buhari thanked Shettima for demonstrating leadership in the state during these difficult times.

‘‘I have an idea how much you are doing and I very much appreciate it. I’m sure that has earned you more respect from the people,’’ he said.

Adesina said earlier in his remarks, Shettima recalled that before 2015, Boko Haram had almost completely overrun the state, occupying many local government areas because the state government did not receive the necessary support and succour from the then federal government.

The governor was quoted to have said, ‘‘We are here as a people who worked, prayed and waited for your presidency in the firm belief that with you as Commander-in-Chief, Boko Haram will become history.

‘‘We are here because you have demonstrated empathy for Borno people and the overriding commitment to end Boko Haram.

‘‘We are here because we knew you would welcome us without any suspicion or contempt.’’