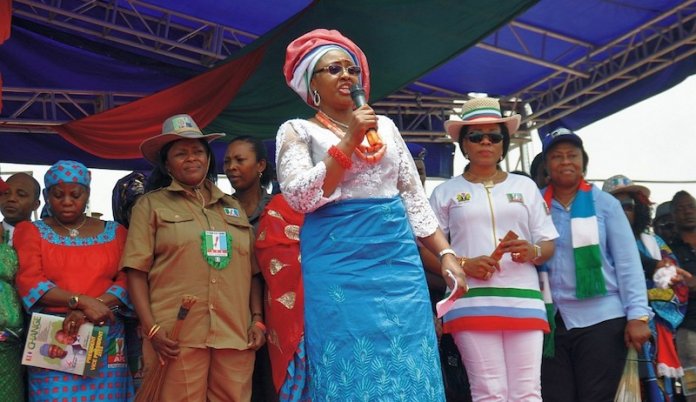 Wife of the President, Mrs. Aisha Buhari, has been appointed the chairperson of the All Progressives Congress (APC) Women and Youths Presidential Campaign team for the 2019 election.

The wife of the Vice-President, Dolapo Osinbajo, was also appointed as the co-chairperson of the campaign team.

This is contained in a statement made available to the News Agency of Nigeria (NAN) yesterday by Mrs. Buhari’s spokesperson, Suleiman Haruna.

The statement said the campaign team would be inaugurated on January 3 by President Muhammadu Buhari at the Banquet Hall of the Presidential Villa at 2 p.m.

The appointees are expected to campaign for the re-election of Messrs Buhari and Osinbajo in the February poll.

The list of the appointees also has the APC national woman leader, Salamatu Baiwa, as the national coordinator.

According to the statement, Binta Muazu would serve as the Deputy National Coordinator (North), with Rashida Yahaya Bello as Zonal Coordinator for North central, Hadiza Mohammad Abubakar for North-east, Zainab Atiku Bagudu for North-west and Nkechi Rochas Okorocha for South-east.

The statement added that the Senior Special Assistant to the President on Administration, Hajo Sani, would serve as the administrative secretary of the team.

Other members of the campaign team include artists from Nollywood and Kannywood as well as technocrats, politicians, academicians and the business class.

Similarly, the statement announced an advisory council for the campaign team, comprising serving and ex-ministers, governors, legislators and security officers as well as top public officers.

The Directorate of Contact and Mobilisation is to be led by Nasiru Ali Ahmed, while the Directorate of Strategic Planning would be headed by Garba Abari, the director-general of National Orientation Agency (NOA), according to the statement.

The statement said the Directorate of Youth Mobilisation is to be led by Mohammed Jibirilla; with AbdulMumin Jibril as the director of a 71-member Media and Strategic Communication of the team, and Sony Marshal Harry as the director of special duties.

It added that the Directorate of Logistics for the Campaign team would be led by Mohammed Jibril, while the Directorate of Creativity and Entertainment has about 170 members, comprising majorly Nollywood and Kannywood representatives.