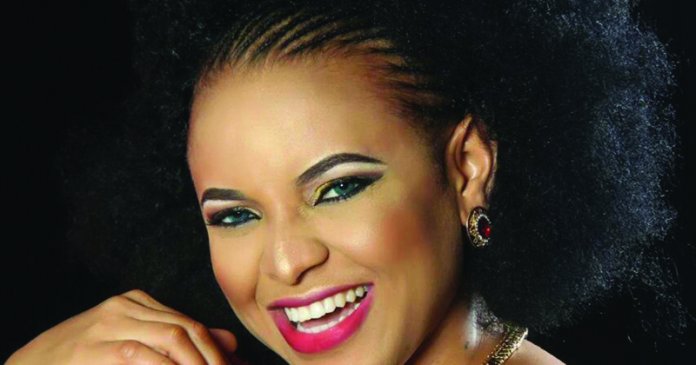 The glow of her spotless skin can ignite the sight of a blind man. Shy but simple and stylish in appearance, she exudes humility and humanity. Despite being one of the most beautiful faces in the Nigerian entertainment industry, Ogechi ‘Shirley’ Igwe, as much as possible, keeps a low profile even having successfully stayed for years as a commercial model for a popular cosmetic brand before venturing into acting and movie production.

So it was not surprising as she walked in unidentified at Seven Seasons Fashion Lounge on Admiralty Way, Lekki Lagos on a Sunday evening to support the 10th anniversary of Fashion for Life, a female clothing line own by her friend. The event had attracted top female personalities from the media and entertainment sector, including Helen Prest-Ajayi, Adesuwa Onyenekwe, Monalisa Chinda, Chioma Ude of AFRIFF and the famous sisters – Obukome, Gloria and Elvina Ibru.

As Shirley paced through to join other guests seated at the showroom, there was exchange of eye contacts. In an informal setting, she would strut the run way that evening along with eleven other female guests from different fields of art as part of activities for the night, amidst music, glitz and fashion. One had actually expected to hear from the Nollywood actress post production of her movie ‘Middle of Nowhere’, which was slated to premiere early this year. It was not out of place to ask her about the project.

She revealed that she sold it to an online firm. “I sold it to an online firm in America so whichever way they chose to promote the film is left to them.” At the moment she’s in “Hook, Line & Sinker,” a drama series airing on Africa Magic. A pretty face and enthralling personality, she had just recently embarked on a humanitarian project closed to her heart. The light skin actress has just launched a foundation to fight the scourge of diabetes, especially the indigents who cannot afford the treatment of the incurable ailment.

She was indirectly a victim of diabetes having lost her mum, dad and lately, her aunt to the ailment. It then touches her heart to so help victims of diabetes through the Daughters of Love Foundation (DLF). She disclosed that “Very soon we shall embark on awareness in rural areas, starting from Imo State.” During the launch of the foundation which had coincided with World Diabetes Day 2018, the screen diva who was the Chief Protocol Officer to Governor Rochas Okorocha of Imo State, had chronicled her personal experience.

In her words, “Having lost my mother at the age of 13, and father 2014 and most recently my aunt, to the cold hands of diabetes, I can only but relate to the pains patients and families of patients go through, throughout the duration of this deadly disease. It saddens my heart that our society does little or nothing for this cause, and we, as individuals take it for granted.

“A few people close to me know how passionate I am about helping, and I feel strongly that diabetes care is a cause very much worth supporting,   therefore I have founded Daughter’s ’s of Love Foundation (DFL) to help alleviate human suffering related to diabetes, and it’s complications among those least able to with stand the burden of the disease. Indian medical mission offers free outreach in Anambra.

“DLF aims to create programs and projects that will be of assistance to diabetic patients, as well as widows/widowers in other to promote physical and emotional well-being in community / rural developments through financial assistance, provision of healthcare assistance, entrepreneurship for the down trodden, conducting outings for awareness and to educate the underprivileged on the implications of the disease.”