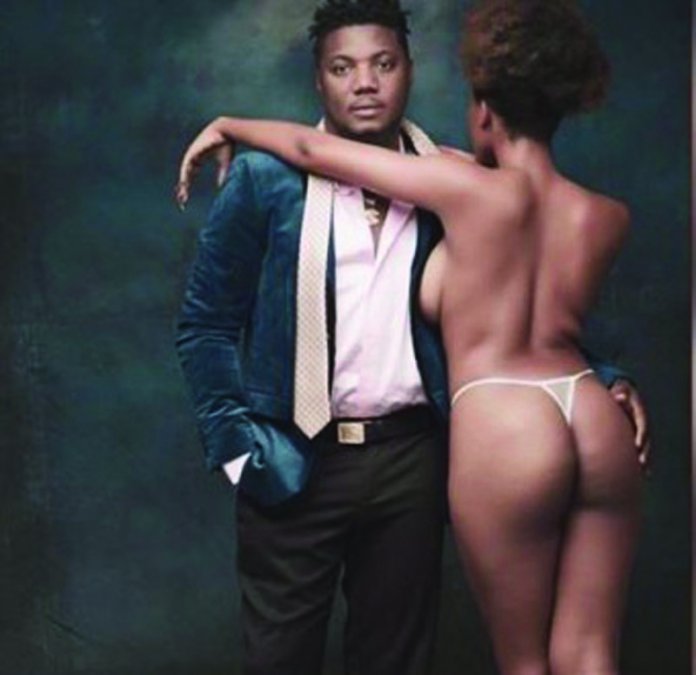 Perhaps, in a bid to romance creativity, Sodiq Abubakar Yusuf, aka CDQ, took a photo of himself with a semi-nude model to a whole new level, by using it to wish his followers a merry Christmas. Ferdinand Ekechukwu reports

igerian indigenous rap artiste and songwriter, Sodiq Abubakar Yusuf, popularly called CDQ, is known for his lyrically lewd lines and coded lingos. The street musician who is notorious for his vulgar languages, perhaps in a bid to romance creativity, took to a whole new level with a semi-nude model when he shared photos of himself with the nearly naked woman to wish his followers a merry Christmas.

In one of the photos, the rapper sat on a chair while the lady, clad only in G-string panties leaned against him. Her cleavage visible by the sides in the photo and so was her bare butt with the rapper’s hand firmly grabbing it as he looked straight into the camera. Sharing the now controversial photo on his Instagram page, the rapper wrote, “Merry Xmas guys Woss Wobi Mami Santa is here.” Since the photo went viral, it has been generating a lot of mixed reactions.

While many fans of CDQ have condemned his recent photo, controversial On-Air-Personality, Daddy Freeze seems to agree with him. According to him, ‘sorry to burst your bubble but this picture is actually a perfect depiction of Christmas. Mixing Christ with the idolatry and harlotry of Christmas is even worse than the nudity displayed in the above picture’.

While some social media users have condemned the photo to be in bad taste, a good number fantasised with the photo as evidenced in their comments.

CDQ’s Christmas photo could be a stunt to push his recent album ‘Ibile Mugabe’.CDQ started music professionally in 2008 as a back-up singer for the late Da Grin before rapping in English language with M.I.

In 2013, he signed a recording contract with Masterkraft’s General Records after winning a rap battle at the weekly Industry Nite in December 2012. In 2014, he released his breakthrough single titled “Indomie” which featured vocals from Olamide while the remix of the song featured Davido. The Masterkraft-produced song brought CDQ’s career to limelight and further earned him two nominations at the 2015 Nigeria Entertainment Awards and a nomination in the Best Street-Hop Artist category at The Headies 2015.

His debut studio album titled Quality, CDQ enlisted the service of Wizkid with whom he released “Nowo E Soke” as a lead single off the album. The music video for the song was directed by Unlimited L.A and went on to win the Best Afro Hip Hop Video category at the 2016 edition of the Nigeria Music Video Awards. On 16 August 2016, he unveiled the cover art for the album before it was released through General Records on 22 August to positive critical reviews.

On 11 November 2016, he launched his own record label N.S.N.S, a short-form for No Struggle No Success Entertainment. On 1 Feb 2017, he dropped his first official single under the platform titled ‘ Say Baba ‘ which was produced by Jay Pizzle. CDQ’s latest album released November 16 2018 also has production touches from MasterKraft and DJ Maphorisa. Titled ‘Ibile Mugabe’, it features Nigerian superstars including Wizkid, Tiwa Savage, Reminisce and Davido.