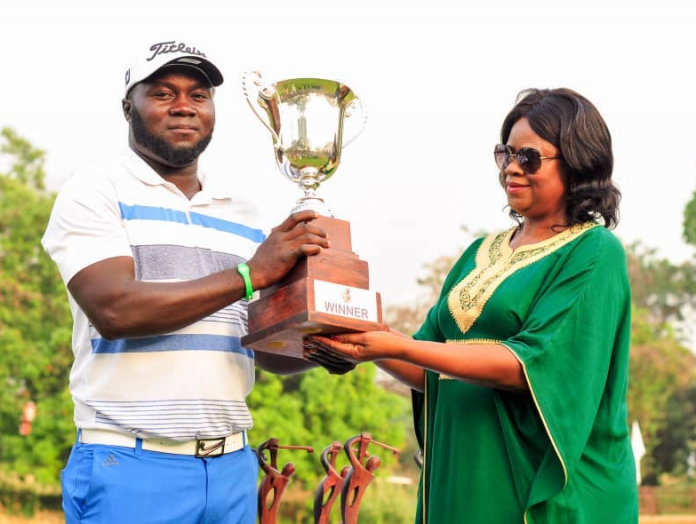 Sunday Olapade at the weekend in Abuja cumulated a present-perfect 10 under par 278 to win the Tour Championship, the final event on the schedule of the West Africa Golf Tour.

The Tour Championship paraded the top-ranked 30 players on the Tour, who converged on IBB International Golf Club, Abuja for a piece of the tournament’s $45,000 prize money.

Olapade, from MicCom Golf and Country Club, Ada, Osun State, executed the final round with a commanding one under par 71 to beat Vincent Torgah of Ghana by six strokes. His path to victory had been eased by his scores of 71, 68 and 68 respectively in the preceding 54 holes.

The victory was his fourth on the West Africa Golf Tour this year following wins at Port Harcourt Classic, B&E Match-play Abuja and Nigeria @ 58 at Lakowe Lakes, Lagos.

It also reinforced the intensity of the rivalry between him and Torgah as both players featured in the highly contested final grouping and between themselves accounted for eight of the 10 tournaments on the 2018 schedule.

Olapade held on to his four-shot advantage and refused to allow Torgah into his lead on the front nine they both scraped at level par.

Despite several openings to come into the play, Torgah blew and hot and cold and failed to take the initiative on a feisty back nine. His hope of mounting a real challenge evaporated, when he slipped six shots out of the lead after Olapade birdied the 14th and 16th holes while he could only respond with pars.

Torgah closed at one over par 73, but not withstanding was crowned the West African Golf Tour Order of Merit winner for the second consecutive seasons.

After he was handed the trophy by Justice Monica Dongban-Memsen, Olapade, who earned $6,000 for his effort, described the task as one that was cut out considering he was matched with Torgah and Gift Willy.

“It was not easy on the course today as I played with tough guys. I only started to feel at ease in the last two holes when I was leading by six shots. At that point, I knew somebody had to kill me to give up the lead,” Olapade said.