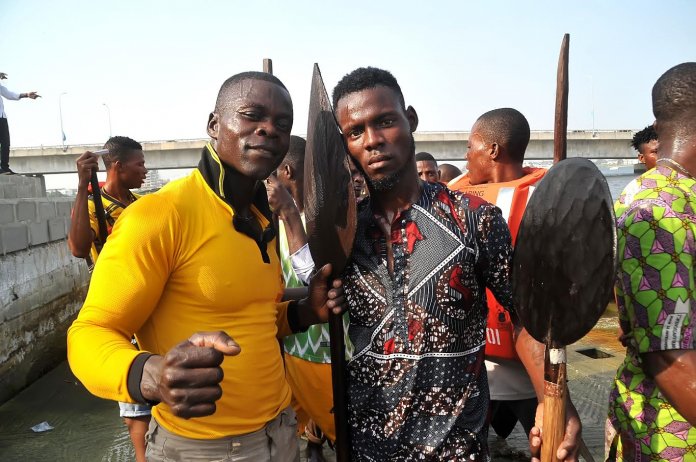 The maiden Lagos All Sail Boat Race has produced its first set of winners. In what will go down as one of the country’s most keenly contested water racing championships in recent times, contestants coloured Lagos Lagoon with exciting  and never-to- beforgotten performances in three categories of rowing, jeskying and boat racing.
The event kicked off at the BICS Jetty venue of the Championship in Lekki, Lagos on Friday with a horde of  skilled rowers from the 36 states of the federation including the FCT, Abuja  taking to the waters to compete.

In the end, the duo of Benjamin Kunumen and John Fasim from Bauchi State emerged the winners, posting a time of 9.56seconds  to clinch the Harbour award for contestants in the traditional rowing on canoe category.
But by far the most prestigious prize of the day-the King of the Sea award would go to  the Lagos State Waterways Agency (LASWA) crew which  beat all other contestants  to clinch top place in the speed boat racing category.

The boat named Quantum of Solace of the James Bond fame, breasted the tape to finish as the Queen of the Sea.
Youthful Sunday Adeboye who thrilled the crowd with his skill and dexterity on the jesky (wave runner) carted home the Prince of the Sea  prize after beating  three other contestants in a keenly contested race.
Speaking at the end of the event, initiator of the championship, Maleek Shehu, praised the contestants for their courage and athleticism, saying they  symbolised the  essence of the race itself.
“We salute the courage, skill, competitiveness and athleticism of the participants because they symbolize the essence of this event,” he said
“We are glad that we have, in our own small way added value to water sports in the country, as well awakening a  new consciousness  to the many untapped potentials of the huge body of water Lagos is blessed with.
“We are therefore committed to sustaining this noble objective as we look forward to a bigger and more exciting event for next year,” he added.
Sailing Federation, Rear Admiral Festus Porbeni (rtd) was on hand to present trophies and medals to winners while popular TV presenter and talk show host, Frank Edoho, was the event’s compere.

Clark: Nobody from the South Should Serve as Running Mate to a Northern Presidential Candidate