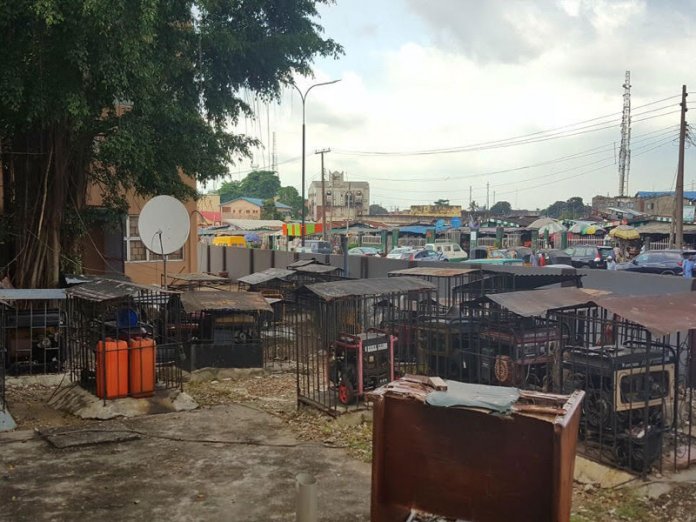 700 electricity generating sets at the multipurpose Sura Shopping Complex on the busy Simpson Street in Lagos have gone silent, and may be looking for new homes simply because a new scheme seeking to supply clean, cheap and reliable off grid electricity to major markets across Nigeria has taken off there, writes Chineme Okafor

“Most times we use diesel to power our generators and the cost is usually much. We  buy 30 litres at N6, 990 twice in a week, but now, when we buy the 30 litres, we use it for about three weeks,” Tolulope Omolade, a master baker who operates from Block A2-6 Suite 79 at the popular SuraShopping Complex told THISDAY shortly before Vice President, Yemi Osinbajo, commissioned an independent power system at the multipurpose business complex.

For Omolade, sourcing electricity from the 1.5 megawatts (MW) independent mini grid power supply system provided by private operator – Solad Power Holdings, from the Island Power Plant (IPP) in Marina through a dedicated underground distribution network infrastructure for SuraShopping Complex, means that she will now spend less on electricity bills to run her baking business at the complex.

It also means, according to her, more money from profit retention considering that she now spends less on electricity bills.

“We bake bread and other confectionaries, and we use our generator to power our mixer (perhaps because the mixer consumes a lot of electricity), but we use the electricity from the IPP more now and the power is stable and cheap, and we now spend less on diesel,” Omolade, added to reinforce how useful power from the IPP has been to her.

Not far from Omolade, within the same complex but at a different block was Angela Ogunfu, a business development officer for a meat shearing medium scale enterprise – Zumo Meats, whose thoughts about the Sura IPP was not entirely different from that of Omolade, except perhaps for the fact that her workers no longer have to spend their weekends taking turns to run generating sets to keep meat in their storage facilities frozen.

“Before now, it had been expensive to keep the electricity here on because even on weekends, we still have to keep the power on to be sure our products don’t go bad. We burn petrol worth about N15, 000 in a week just to preserve the meat we have in stock and this isn’t easy. It takes from our profit when we deduct that much from our earnings,” said Ogunfu, in her interaction with THISDAY.

Ogunfu, noted that, “the coming of the IPP has been good. Even when it goes off, it is just for about five minutes. The tariff is good for us, it is not comparable with what we spend on petrol. We are into meat shearing; we slaughter meat in our abattoir and bring them here for storage and distribution to customers, and we use electricity in good volumes to store the meat and keep them fresh.”

As direct beneficiaries of the Sura IPP which was developed and deployed by Solad as part of the Energising Economies Initiative (EEI) of the federal government, Omolade and Ogunfu, in their respective conversations with THISDAY suggested that the idea of taking apart and providing stable electricity to economic clusters and markets in Nigeria could after all be a thoughtful economic policy from the government.

Their views as shared with THISDAY suggested that generating sets – many of them laying extensively across available open corners in Sura, which are used by operators at the complex have suddenly become dormant and silent at least for the first 70 days as the complex has enjoyed uninterrupted electricity from the IPP.

And, in confirming this, chair of SuraShop Owners Association, Mrs. Bunmi Ajayi, who also runs a fashion design outfit at the complex, stated, “our generators now need new owners, we are ready to sell our generators (to new owners).”

“All our generators are now collecting dust due to lack of use, and for all of us, issues of generator fuelling, maintenance and replacement of parts are no longer our issue and the era of generators’ noise have gone forever in Sura,” added Ajayi, who explained that between January of this year she had 35 employees, but had to recruit additional 15 within the last 70 days that Sura had used electricity from the IPP because demands for her services had increased.

Initiated by the Rural Electrification Agency (REA) in partnership with Solad Power Holdings, the Sura IPP is reportedly part of the EEI of the federal government, which sought to support the rapid deployment of off-grid electricity solutions to medium scale and mini enterprises within economic clusters such as markets; shopping complexes; and agricultural or industrial clusters in Nigeria through private sector power systems developers.

The EEI which is being implemented by the REA in phases has been planned to create over 2,500 jobs from businesses that would be revived by stable electricity supply to them at competitive rates.

According to the REA, over 200,000 MSMEs have been planned to benefit from the EEI, while over 80,000 shops will receive clean, safe and reliable electricity by the end of 2018. The EEI is also expected to reduce carbon emissions worth 25,000 metric tonnes annually from the use of clean power supplies by the beneficiary economic clusters.

The REA equally explained that it has kicked off three projects in the pilot phase of the EEI, and would electrify 50,000 shops in Sabon Gari Market of Kano State; Ariaria Market in Abia State; and then Sura Shopping Complex in Lagos State.

It added that the EEI has another 13 markets in its first phase to execute, adding that the projects in this regards were now at various stages of development and construction across the country leveraging solar home solutions and gas-to-power.

But for that of Sura, it noted that the over 11 different businesses at the complex which ranges from printing and branding to financial services; equipment maintenance; catering; and tailoring services, would now benefit from the electricity Solad has bulk purchased from the excess capacity of the Island Independent Power Plant, to operate their businesses instead of relying on fossil fuel generating sets that are expensive to run and equally dangerous to their health and environment.

Giving detail of the system and its workings, the Managing Director of REA, Mrs. Damilola Ogunbiyi, stated that the complex has 1,047 shops which have been metered and energised for 70 days since the project kicked-off.

Ogunbiyi, informed that the number of generators that have been decommissioned thus reducing harmful greenhouse emissions and noise pollution at Sura were 700, in addition to shop rentals at the complex increasing by 15 per cent due to an improved business environment.

“The Sura business experience has been completely transformed into a safe, clean, cost effective and business-friendly environment.  This is the sort of progress the FGN is committed to scaling through the Energising Economies Initiative.  We are collaborating with qualified private sector developers to roll out off-grid electrification projects across the country – Surais just the beginning of our success story,” said Ogunbiyi, about the project.

To confirm the operational and specifically pricing framework for the system, THISDAY asked Omotunde Hassan, who is a project developer at Solad, what the situation was, and he explained the power supplied to shop owners in Surawas stable for 24 hours.

Hassan, equally disclosed that a tariff of N50 per kilowatt hour has been agreed for and used to supply electricity to the complex, adding that payment has been designed to be seamless.

“It is essentially 1.5MW operating from the Island Power where we have taken bulk power supply. Every shop owner has an individual meter to track their usage. Power to the shop owners is 24 hour every day and our return is over 20 years while shop owners are charged N50 per kilowatt hour,” said Hassan.

He further stated: “Island Power Plant has excess power and we are able to off take from them to Sura. If the market does expand, we can increase the capacity. So far, we’ve had only 12 hours of outage in the last two months and that was during the test-run of the systems.

“Payment is prepaid and there are no issues because it is transparent and seamless to recharge meters. The shop owners have control over the power they use.”

Indeed, stable electricity has been proven to be an important factor in the productive activities of any economy including agriculture; commerce; manufacturing; industry; and services, and the lack of it therefore contributes to poverty and economic decline.

Economists such as the Nigerian Association of Energy Economists (NAEE) have frequently drawn a nexus between energy poverty and economic regression. The lack of it there of in Nigeria has largely contributed to the low level of economic activities in the country as well as her high unemployment rate.

Thus, during his inauguration of the IPP, Vice President, Prof. Yemi Osinbajo, stated that the EEI was basically set up to help businesses in Nigeria grow and create jobs and wealth for the country’s citizens.

Osinbajo, explained that many other markets across the country were slated to benefit from the EEI, adding that in the coming years, Nigeria will experience massive economic growth on the back of the initiative.

“This is a very special federal government project and one of the reasons why this project is particularly important is because it tells us what can be done. It tells us what is possible, and so much is possible. There are several other markets that we are going to.

“The reason why we are going to the markets is because we believe that small businesses hold the future, they are the future of the Nigerian economy and we must support the small and medium enterprises,” Osinbajo, explained.