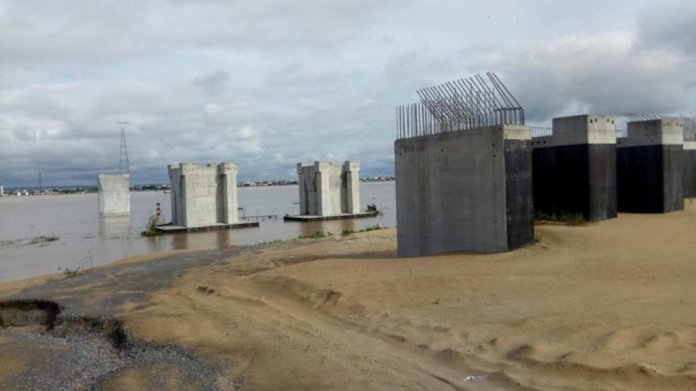 The much-anticipated completion of the 2nd Niger bridge has been slated for February 2022.

This was confirmed by the project financing partner, the Nigeria Sovereign Investment Authority (NSIA), and the bridge builder, Julius Berger, during a joint facility tour of the authority and traditional rulers from both Onitsha and Asaba.

The tour had afforded the parties the opportunity to inspect the bridge construction site and the pre-fabrication plants on both sides of the bridge.

It further emerged that the first phase of the three – phased project will gulp a total sum of N220 billion- covering the bridge and the 11.9 kilometer stretch.

The entire 44 -kilometer bridge project had come under heavy criticism from some quarters following the temporary suspension of early works largely due to funding constraints- particularly the mode of financing- as well as community- related obstacles.

However, Managing Director/Chief Executive, NSIA, Mr. Uche Orji, had during a courtesy visit to the Obi of Onitsha, His Majesty Nnaemeka Alfred Achebe, as well as the Iyase of Asaba, His Majesty, Patrick Isioma Goodluck, assured that the project will be completed by 2022, adding that there will be visible signs of the bridge by the end of 2019 when some concrete slabs would have been positioned.

The NSIA boss explained that the resumption of work followed the deployment of capital to key projects under the Presidential Infrastructure Development Fund (PIDF) which was announced recently.

The PIDF, an initiative of President Muhammadu Buhari, was designed to facilitate the rapid completion of key infrastructure projects that had been stalled for years- and managed by NSIA.

The Funds had already been disbursed for construction works on the Lagos-Ibadan
Expressway; Second Niger Bridge Project as well as the Abuja-Kano Expressway.

Orji said till date, the NSIA had disbursed ₦71 billion under the PIDF programme.

According to him, other projects being undertaken under PIDF include the Mambilla Hydro-Power Project and East West Road.
He pointed out that the funding sources for the PIDF included ₦585 billion from the Nigerian Federation (Federal, State and Local Governments); ₦97 billion from NSIA, ₦1,500 billion from export credit
agencies, and ₦372 billion from private investors.

Also, Julius Berger’s Project Director for the 2nd Niger Bridge, Mr. Friedrich Josef Wieser, told journalists that he was convinced that the project will be completed on February 28, 2022.

While in the palace of the Onitsha monarch and later, his counterpart in Asaba, Orji appealed to the host communities for their continued cooperation for the engineering contractors working at both ends of the bridge.

He added that the visit was to thank the people for past support as well as reiterate government’s unflinching commitment towards the completion of the project.

He, also said funding for mobilisation for the Lagos- Ibadan Expressway had just been released.

On the bridge, he said: ”The contractor was paid his advance in August and that’s what is pushing us to feel very confident that from where we are, we are on track for the scheduled handover in 2022.

“We are very confident with the new funding mechanism which increases by way of support from the federal government; then it also allows us when we get to the part that we need private sector participation which we believe is the fund we will be raising sometime in 2020, it will not be a difficult stretch to raise that private sector portion of the funding.

He said the project had gone from its early works to the main works.

However, in his response to the NSIA boss, His Majesty Achebe vowed to ensure that peace was guaranteed as the contractors resume work.

He also appealed to the contractors to apply local content principles in the employment of young men and women who are qualified to work at different stages of the work duration to reduce unemployment in the area.

He said: ”We are not asking for handouts- but make us feel as part of the project” adding that there are several people from both Asaba and Onitsha who may have the professional qualifications to take up some of the vacancies in the construction work.

He, also affirmed that going by what was seen on ground at the project site, despite the temporary suspension, it had now been established that “this time there is something going on.”

Similarly, His Majesty, Isioma Goodluck, who spoke on behalf of the Esagba of Asaba, also said: ”Over the years we heard about this and nothing happened” adding that “From what I hear happening in the river, we have every cause to commend the Federal government for the efforts being taken.”

He further urged the project handlers to ensure justice in the engagement of qualified indigenes to participate in the project in order to create jobs.

He said the completion of the bridge will aid economic development in the areas as well as the country in general.