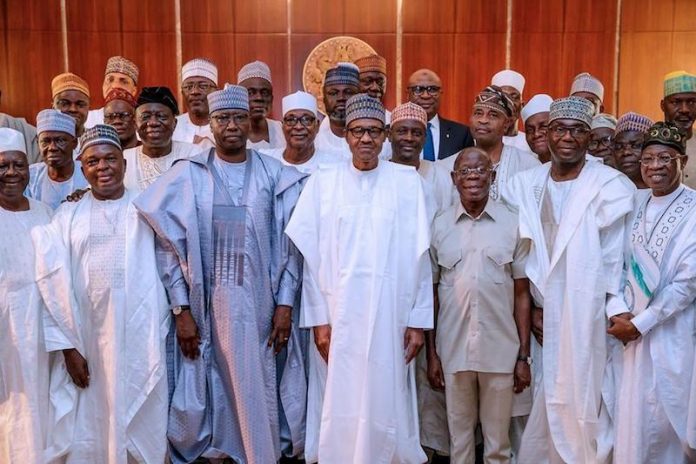 Olawale Olaleye in Lagos and Omololu Ogunmade in Abuja

The presidential order, issued during a closed-door meeting with leaders of the chapter in the State House, Abuja provided an opportunity for diversion of attention from brewing crises in the ruling party that its National Chairman, Mr. Adams Oshiomhole, is battling to survive a rebellion by some of its governors, who are mobilising to remove him from office.

Although Oshiomhole told State House correspondents yesterday that he was on a firm ground, THISDAY gathered that Governors Ibikunle Amosun and Abdulaziz Yari of Ogun and Zamfara States respectively, are relentlessly mobilising the party’s 21 governors to force a National Executive Committee (NEC) meeting, where he would be removed from office.

At the Presidential Villa yesterday Oshiomhole was still in charge, leading the Kwara State chapter of the party and its governorship candidate, Mr. Abdulrahman Abdulrazak, to Buhari, who charged them to end the reign of the Saraki dynasty in the state.

The news of the president’s order came through Abdulrazaq, who boasted that the era of the dominance of Saraki in Kwara politics was over.
He said, “Kwara has become a battle ground and as you can see, we have come here to see Mr. President having gone through a hectic process of primaries. We went through direct primaries in which about a 100, 000 party faithful voted.

“We had our difficulties but we have come to see the president to tell him that all is well and we are in unison and he has given us marching orders to go and take Kwara. He is history, we have gone pass him and we are looking at Government House.

Meanwhile, the president’s spokesman, Mr. Femi Adesina, said the president described the late Major General Tunde Idiagbon as a very rare example of what loyalty to one’s fatherland and to a superior should be.
According to him, the president made the remark when he received APC governorship aspirants and members of the party from the three senatorial zones of Kwara State.

Adesina said Buhari advised Nigerians to remain faithful and loyal to the country, threatening, however, that anyone who has another place to go other than Nigeria should proceed.
“You don’t have to be in uniform to be loyal. What I said long ago in 1984 is still valid today. We have no other country but Nigeria. Others who feel they have another country may choose to go. We will stay here and salvage it together,” he said.

Leading the Kwara delegation out of the meeting with the president, Oshiomhole seized the moment to brief State House correspondents on the moves against him, dismissing them as non-events that could not harm him.
“This is my finest hour,” he said, explaining that he was encouraged by the level of participation in the party’s recently concluded primaries.

He also said in view of the news making the round that some governors had vowed to remove him, it would be necessary for him to consult his lawyer on what that threat meant to enable him have insight into how to handle it.
Oshiomhole who added that he had been committed to the principle of one man one vote, also said he would not stay there as the party chairman and watch vulnerable people oppressed by powerful people.

According to him, such vulnerable people may be senators or House of Representatives’ members whose interest, he said, he was duty bound to protect, pointing out that he was only aware of one or two governors who have issues with him.

Submitting that only two of 23 governors on the platform of democracy cannot remove him bearing in mind that democracy is a game of numbers, Oshiomhole said even the issues that such governors have with him can be resolved in the spirit of democracy.

He said, “I need to consult a lawyer who understands legal language to decode it to my layman understanding to be able to deal with it. But the only thing that I just want to clarify is that I have seen banner headlines, people are just calling me, there is crisis in APC, that my office is under threat, some APC persons are very angry and all that.

“I just want to say that this is my finest hour. I am being encouraged by the level of participation in our primaries and of course the more open, the more the democratic process is.”

Despite Oshiomhole’s confidence, some governors of the party, THISDAY gathered, will today meet in Abuja, to commence his removal process over alleged manipulation of recent primary elections conducted by the national secretariat of the party.
Leading this cause are Amosun and Abdul-Aziz Yari, the two most hit of the APC leaders and governors, and had allocated mobilisation of the process geo-politically to each other.

The primary elections conducted recently by Oshiomhole’s appointed National Working Committee (NWC) members had schemed out candidates of Amosun and Yari as well as 15 other state governors, a development the duo reckoned was orchestrated by Oshiomhole to humiliate them and make the party vulnerable hence their fight back.

This, interestingly, is happening at a time President Buhari had sent words round to the affected states that he would make sure the alleged injustice in all the affected states would be addressed.
Apart from Amosun and Yari, other governors believed to be disposed to Oshiomhole’s removal are Rotimi Akeredolu (Ondo), Mohammed Abubakar (Bauchi), Mohammed Abubakar (Jigawa), Rochas Okorocha (Imo), Tanko Al-Makura (Nasarawa), Abubakar Bello (Niger), Kayode Fayemi (Ekiti), Yahaya Bello (Kogi), Aminu Masari (Katsina) and Abubakar Bagudu (Kebbi).

The Oshiomhole-Must-Go governors believed that governors like Simon Lalong of Plateau, Nasir el-Rufai of Kaduna, Abdullahi Ganduje of Kano and Akinwunmi Ambode of Lagos are though not happy with Oshiomhole, may no longer show interest in his removal, because they either have what they seek or not in a position like Ambode to get anything done.

They are, however, meeting in Abuja today to write their names and sign, undertaking that Oshiomhole must go. They are also believed to be doing this with the full support of the president’s men in Aso Rock, including the First Lady, Aisha Buhari, who reportedly felt disappointed with his management of the party so far.

His protagonists questioned the rationale behind announcing the names of people, who either did not partake in any process or switching the names of winners for those who can hardly deliver their ward in a major national election where the opposition is already menacing.
Although THISDAY sources did not hint at what the president’s men are doing next, they, however, maintained that they, otherwise called the cabal, are working on their own plan to tame the national chairman or completely get him out of the way.

Regardless, Buhari, on Sunday, had reassured all those that were allegedly poorly treated in the just concluded primary elections of the APC, reiterating that justice would be served, ultimately.

The president, THISDAY gathered, gave this reassurance to some traditional rulers from Ogun State, who visited him last Sunday, noting that he had since issued an ultimatum to Oshiomhole, to resolve the issues, which arose from the primaries.
It was also gathered that the president had immediately sent words to the national chairman to ensure that all the controversies surrounding the governorship and state assemblies’ primary elections must be resolved as soon as possible.

“The president appears to be embarrassed by the continued controversy, which keeps mounting by the day. Even the latest embarrassment came yesterday with the reported exit from the party of one of the president’s staunchest loyalists, Senator Shehu Sani.

“The president has told him to clear the mess as soon as possible, because the distraction the controversy continues to ignite does not bode well for the polity, presidency, the party and even the wellbeing of members,” the source said.
According to the source, “By far the most embarrassing for even the president and which has presented the chairman as lacking capacity and emotional intelligence is the allegation that the governorship primary in Ogun State that was said to have produced the individual, Dapo Abiodun, whom the chairman is supporting never held.

“When Governor Amosun met with the President in the company with some other governors last week, it was made clear that the part being followed by the national chairman was capable of totally destroying the party. The Ogun State chapter of the party organised a primary that everybody witnessed. And we have been asking where the other people and Oshiomhole’s NWC members conducted their own governorship primary,” the source asked.
But the latest development, which is the removal plot against Oshiomhole is expected to create new outcomes as the president is reported to have told Amosun, Yari and Bello that whatever injustice that might have occurred would be dealt with.

Already, the deadline for the submission of names of candidates for the House of Representatives and the Senate had lapsed and therefore, the only way substitution could be made is for the APC to provide cogent and verifiable reasons why the names of those, who won were substituted with those that did not.

In the case of the governorship candidates, the last date for the submission and possible substitution is November 2, 2018, some 13 days from today.
Expectedly, Oshiomhole has continued to insist that the APC under his watch now is undergoing a transformation, has also acknowledge the removal plot and alleged gang-up of governors.

The national chairman is said to draw strength from Vice President Yemi Osinbajo, who was alleged to have insisted Ogun must be conceded to him, the national leader of the party, Asiwaju Bola Tinubu and a billionaire businessman man from the Northern part of the country, said to be funding him.