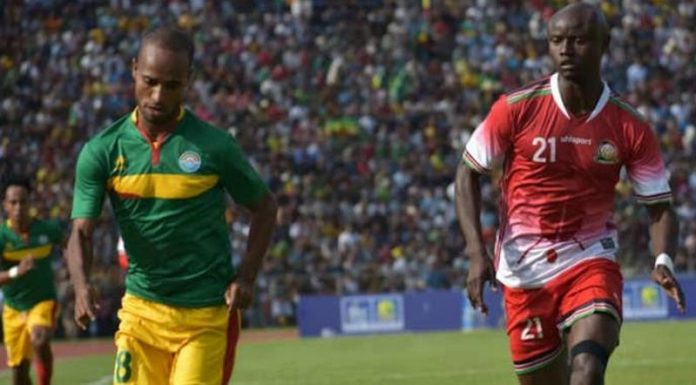 Kenya and Guinea-Bissau secured home victories on Sunday to boost their hopes of qualifying for the 2019 Africa Cup of Nations.

Kenya beat Ethiopia 3-0 in their Group F qualifier as Guinea-Bissau came from behind to defeat Zambia 2-1 in Group K.

Kenya fans queued for several hours outside the Kasarani Stadium in Nairobi where entry to the 60,000 capacity arena was free, with police having to use teargas to disperse the crowds outside once the stadium was full.

The two teams had drawn 0-0 in Ethiopia on Wednesday, but Kenya made home advantage count with Michael Olunga and Eric Johana Omondi putting the Harambee Stars 2-0 up in the first half.

Captain Victor Wanyama made it 3-0 from the penalty spot in the second half on his return to the team.

The Tottenham midfielder, who only recently returned to action following a knee injury, was substituted shortly after his goal following a challenge.

The result puts Kenya top of Group F on seven points from four games – three ahead of Ethiopia.

This group also includes Sierra Leone and Ghana whose matches during this international window were cancelled by the Confederation of African Football due to Sierra Leone’s FIFA ban.

Kenya last featured at an Africa Cup of Nations finals in 2004.

In Bissau, Guinea-Bissau fought back from a goal down against Zambia to win 2-1 and go three points clear at the top of Group K.

Zambia won their home fixture 2-1 in mid-week and looked on course to make it two wins from two when Justin Shonga – who had also scored in Lusaka on Wednesday – put Chipolopolo in front after 13 minutes.

Zambia defender Stoppila Sunzu, who also scored in Zambia’s home win, suffered the unfortunate fate of scoring an own-goal on Sunday, making it 1-1 after 53 minutes.

Guinea-Bissau made sure of all three points with a winner from Toni Silva to move onto seven points from four games in Group K.

Guinea-Bissau is looking to play at its second successive Africa Cup of Nations finals.

Its appearance at Gabon 2017 was the first time they had qualified for a Nations Cup in their history.