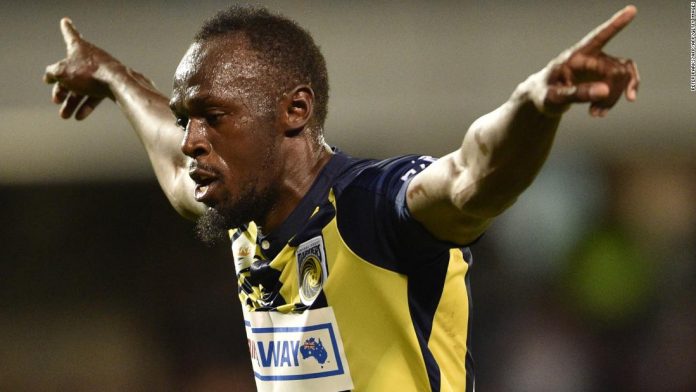 Usain Bolt scored his first goals in professional football after starting up front for Australia’s Central Coast Mariners in a pre-season friendly.

The 100m world-record holder, who is bidding for a professional contract, recovered from a painful kick in the groin to score twice against Macarthur South West United in Sydney.

Bolt put the Mariners 3-0 up in the 55th minute after a strong left-footed finish, celebrating with his trademark ‘Lightning Bolt’ pose.

The Jamaican then capitalised on a defensive mix-up to score his second just after the hour mark before being substituted with the score at 4-0.

The eight-time Olympic champion, who retired from athletics in 2017, arrived at the Mariners in August in a bid to ignite his football career.

Bolt expressed his concerns that Friday’s match would determine his future with the club as he strives towards winning a professional contract and a place with the Mariners for the season, which begins on October 19.

“I’m just happy that I got a chance and I’m proud of myself,” Bolt told Fox Sports after the game.

“It was a big deal… first start and scoring two goals. It was a good feeling. This is what I worked towards. I try to get better and I am on the way to doing that.

“I’m keen, that’s why I’m here to play my best and to try and get into the team,” he added.

The 32-year-old previously trained with Bundesliga side Borussia Dortmund.