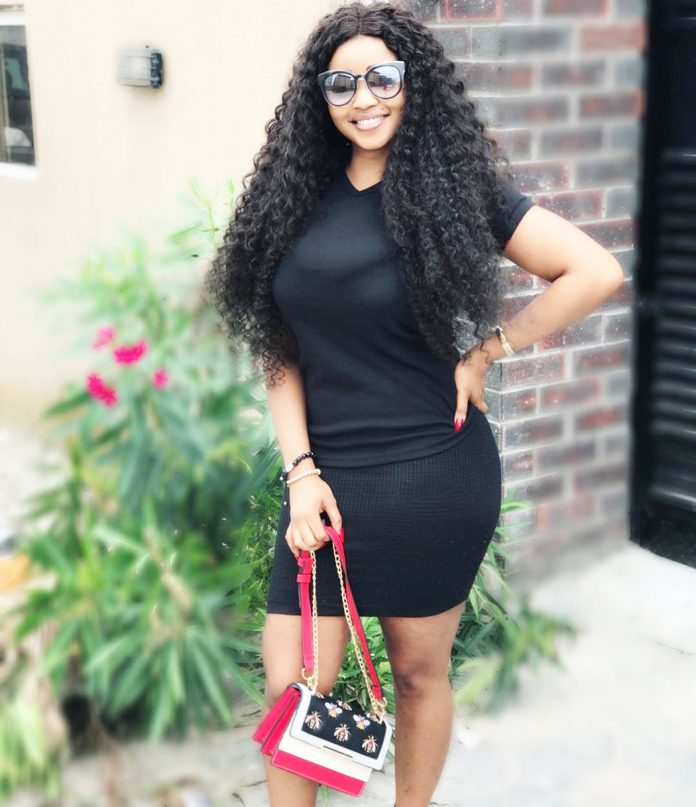 Peju Johnson is a fast rising Yoruba Nollywood actor. Beautiful, young, bold and talented, Peju is fast becoming a delight among movie fans and gradually paving her path to link the league of top flight actors. She shares her dreams, career, life and much more with Chinedu Ibeabuchi

What is there to know about Peju Johnson?

Peju Johnson is an upcoming actress who likes to mind her own business. She’s focused and determined to be the best she can be, as an actress and a woman. I was born in Ile-Ife, Osun State. I had my primary education at Community Primary School and my secondary education at Kingswill College, both in Osun State. After that, I started living in Shagamu, from where I relocated to Egypt in 2011 where I was living and doing a little business. I did a bit of acting on the side too.

My sister invited me over and I liked the place.

So, what pushed you into acting?

I have always wanted to be in the acting craft. It was a dream that became a passion. Although I have always dreamt of becoming an actress but the desire became a passion after I was given an opportunity in my secondary school. I was a member of the drama group but I got my big chance when some people came to my school to shoot a movie and needed a student for a role. I was picked for a semi lead role in the movie, even as a student. Also, when I was in Egypt I did some acting too. There’s a branch of TAMPAN (Theatre Arts and Motion Pictures Association of Nigeria) over there.

So, there’s TAMPAN in Egypt too. How active is it because we haven’t seen a film shot in Egypt?

There are many good Yoruba films shot in Egypt. There is a popular one titled ‘Omo Cairo’ shot by Austin Emmanuel and many Nigerian actors were featured in it. There’s also ‘Baba Esu’, I think that one is not online yet. I was once misquoted that I featured in Omo Cairo and Baba Esu, but I never did. I only mentioned them as some of the films that were shot in Cairo, Egypt. The ones I featured in Egypt are Lawori Baba Ole and Ikanju

Why did you relocate to Nigeria?

So, tell us how your journey into acting started, when and the challenges faced along the way?

I came back to Nigeria in 2016 and met Kehinde Adeyemi in 2017. He is my boss and the person that puts me through. Without him, the journey would have been very hard but with his help and tutelage, things have been moving for me very well. I wouldn’t say things are going on smoothly but I have been coping because acting comes with stress and some other challenges.

How many films have you done since you came back to Nigeria?

I have done up to 13 films or more. There are Law of Karma, Gbajumo, Banuso, Wonuola, Farayola, Okomi-otami, Widow, Wrong number, Nkan Elege and many more!

Is it true that you cannot make it in the Yoruba industry if you don’t belong to a group or have a boss who trained you and introduced you?

I would only say it would be difficult but not impossible. Even if you don’t have anybody and God says you would make it, you will. There are people who have come to the industry without belonging to a group or being trained by anyone who have made it. If you have the talent and the passion and God’s grace you will definitely make it. No doubt, having a boss helps a lot but I don’t believe you can’t make it without one.

In your own opinion and from your experience, what does it take to get a breakthrough, especially in the Yoruba sector?

The most important thing is the talent and the drive. Like I said earlier, having a boss to introduce you also helps because you can get jobs through him. Meanwhile, if you have money to produce your own movies, it will give you fame quicker than any other way round. Because, with your money as a producer you can call the shots and take up any role you want for yourself.

You are very beautiful, do you think it has helped you in breaking through?

Thanks for the compliments. Seriously, I don’t really know. But I think I wouldn’t have come this far, so fast, if I was ugly.

What makes a woman truly beautiful?

True beauty comes from what lies inside a woman and not the outside attribute or features. Beauty does not come from wearing make-ups, hair products or other ornaments. It comes from intelligence, kindness, love of others, decency, sensitivity and other attributes that express love and humanity. And to different people it means different things. That’s why they say beauty is in the eyes of the beholder.

Sexy is soul. I think you’re born with it. It’s not what you buy or adorn yourself with. Sexiness is just about your being; I mean who you are. Contrary to belief, you can’t buy it, it’s not about what you wear, it’s about you as a woman and the person behind your womanhood.

What is it about the industry that annoys you?

The down side I have noticed is the unfriendly attitude of some colleagues spreading false rumours. When there is some form of closeness between you and the opposite sex, to them, it means you are automatically dating the person.

They assume so much and start gossiping which leads to rumours. In some cases, they start off by jokingly calling you the girlfriend of this and that, and before you know it, the news is everywhere. Like seriously, that can be very annoying. They make it look like it’s a sin or big deal to make friends with the opposite sex,

How do you handle male advances?

It has not been easy but I simply let them know I am not searching. For the stubborn ones, I let them know no matter how hard they try I am not interested. Besides, I hardly give people audience. It’s very hard to get my contacts or to even see me.

Why do female actors tend to be richer than their male counterparts?

Can you be a baby mama?

Why? Many women are saying it is better than being a wife?

No. To me, I want a home. I want a husband not a baby daddy. I love couples’ life. Marriage is fun when God gives you your own husband. Marriage is so sweet when you marry someone you love. I want to settle down with a man, not live my life as a single mother.