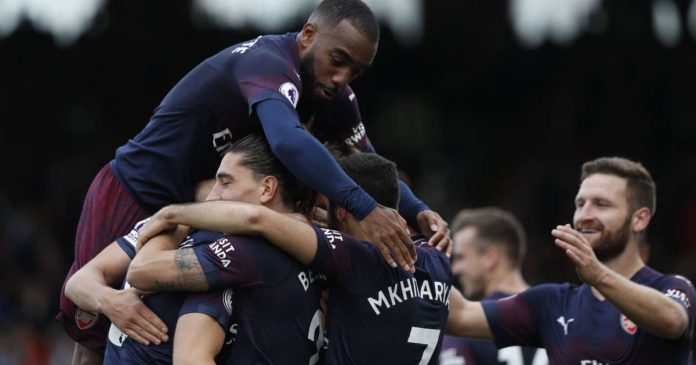 Arsenal manager Unai Emery said Aaron Ramsey is a “very important player” for the club after his goal of the season contender helped the Gunners thrash Fulham 5-1.

A contract offer to Ramsey was withdrawn last month but the Wales midfielder showed his quality when he created and finished a stunning team move to help Arsenal to a ninth straight win in all competitions – their best run since April 2015.

“For me it was very important for him to take confidence and take that first goal,” said Emery.

“He did not start in the first 11 today but when he was on he scored within a minute and that gives confidence for both him and us.

“We are happy because I think this shows the commitment we have in training and the quality and the understanding of our tactical position.

“I think we are in the first competition in the world, and we must keep taking confidence.”

Frenchman Lacazette claimed the opening goal of the London derby at Craven Cottage when he spun on Nacho Monreal’s cutback before drilling the ball past Marcus Bettinelli.

But Fulham drew level before the break as Luciano Vietto pounced on a loose pass by Monreal to thread the ball through to Andre Schurrle, who chipped over Gunners keeper Bernd Leno.

Arsenal were a different side after the interval and Bettinelli – called up by England this week – produced the save of the game to keep out a fierce strike from Hector Bellerin, moments before Lacazette added his second – an early strike from long range which seemed to catch the Fulham keeper by surprise as it nestled in the bottom corner.

Ramsey was introduced in the 67th minute – and the Welshman added a third just 39 seconds later as Arsenal moved from left to right with one-touch passing and neat headers, before Aubameyang cut the ball back for Ramsey to flick past Bettinelli.

Aubameyang added a fourth when he swivelled on a low cross from Bellerin to side-foot the ball into the far corner, before the Gabon striker rounded off the scoring after a neat low finish to cap a thoroughly entertaining victory in the derby.

A sixth consecutive Premier League victory for Arsenal moved Unai Emery’s men up to third in the table, a point behind Manchester City and Liverpool, who meet at Anfield later on Sunday.

Fulham remain just above the relegation zone in 17th.

The Liverpool versus Manchester City clash rarely lived up to the pre-match hype as the Reds started brightly as Mohamed Salah shot wide.

But there was late drama when Virgil van Dijk brought down Leroy Sane with a few minutes to play.

Algeria international Mahrez blazed the resulting spot kick over, but City will still go into the international break on top of the Premier League table.