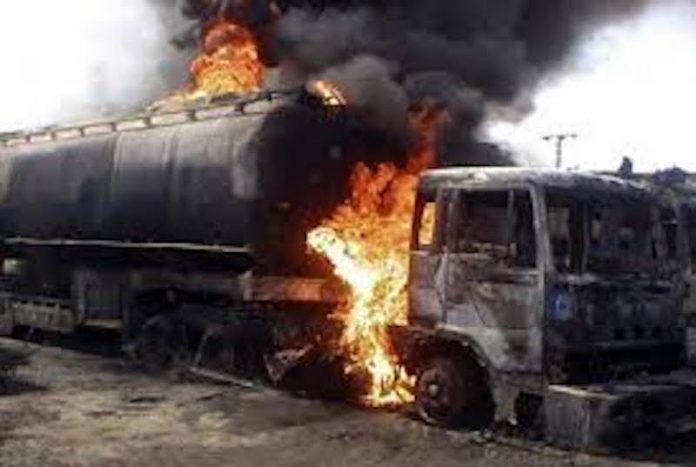 Five persons, including a toddler were late yesterday burnt to death as a tanker carrying 33,000 litres of petrol fell at Shagari Village junction on Akure-Owo expressway, Akure, the Ondo State capital.

The incident, which also led to the burning of no fewer than seven vehicles and shops, occurred few meters to an NNPC petrol station. The tanker, after falling, was said to have spilled its content on the road and later caught fire.

The vehicles affected were a commercial bus and six private cars, as well as several motorcycles. Two houses and many shops along the road were also affected.

“The tanker was on a high speed when a Toyota Corolla car suddenly crossed the road, as the tanker driver was trying to avoid hitting the car, he swerved off his lane and the vehicle fell on the car and later caught fire immediately,” he said.

The eyewitness added that it took many hours after the fire had started before the men of Ondo State Fire Service arrived the scene to put it out. Some men of the state police command and the men of the Nigeria Security and Civil Defence Corps also made efforts to avoid more casualties.

The state Police Public Relations Officer, Mr. Femi Joseph said the cause of the inferno was not known at the time of filling this report.
Our men were on ground, we will investigate the incident”, Joseph said.