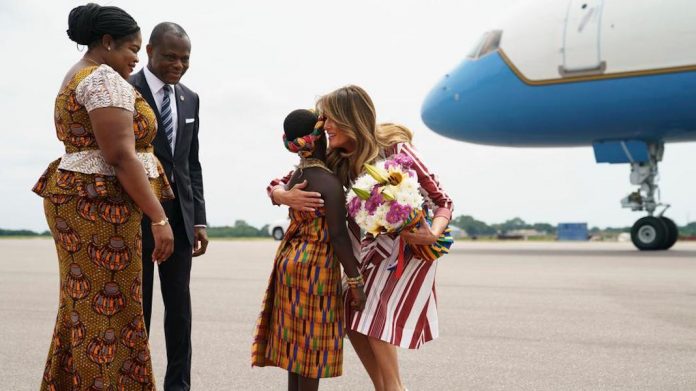 The United States’ First Lady Melania Trump arrived Ghana’s capital Accra on Tuesday on her first solo international trip in Africa, during which she will visit child health facilities, orphanages and meet caregivers.

The stop is Mrs Trump’s first on a four-country tour that will include visits to Kenya, Malawi and Egypt.

A welcoming ceremony of drums and dancing by men and women dressed in traditional attire followed. Trump clapped her hands and waved at a group of school children waiting for her at the airport.

Trump then visited child health facilities and met caregivers during her stay in the capital. She has focused on children as her signature issue and plans to promote child well-being during her four-country tour, which will include stops in Kenya, Malawi and Egypt.

President Donald Trump has not visited Africa since taking office in 2017, but he has reportedly said immigrants from Africa came from “shithole countries”. He denied making the remark.

More recently, he said on Twitter, he had asked his Secretary of State, Mike Pompeo, “to closely study the South Africa land and farm seizures and expropriations and large scale killing of farmers”.

South Africa has proposed land reforms but not implemented them. Forty-seven farmers were killed in 2017-2018 — a 20-year low, according to AgriSA, an association of agricultural associations.(NAN)