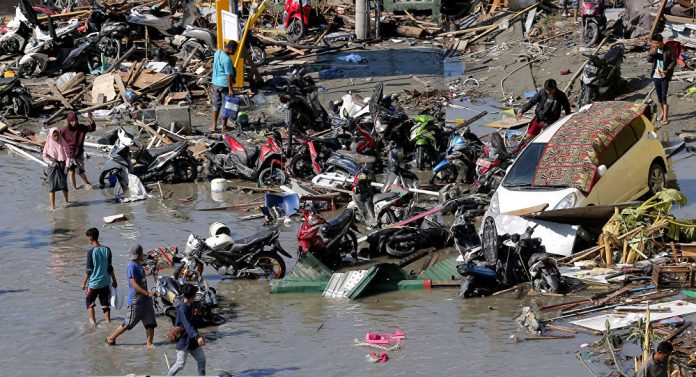 Several earthquakes hit the Indonesian island of Sumba on Tuesday, hundreds of kilometres from Sulawesi, the epicentre of last Friday’s devastating quake-Tsunami.

The official death toll from last week’s tragedy now stands at 1,234, according to the government.

The latest quakes were recorded in quick succession off the southern coast of Indonesia’s Sumba island, the United States Geological Survey said.

The rising death toll in Sulawesi was announced as the police confront mass looting by survivors, taking advantage of the chaos.

There were reports of officers firing warning shots and tear gas to ward off people ransacking shops in Palu, a coastal city ravaged by a 7.5-magnitude quake and the tsunami it spawned.

Almost 200,000 people are in need of urgent help, the United Nations says, among them thousands of children.

Survivors are battling thirst and hunger, with food and clean water in short supply, and local hospitals are overwhelmed by the number of injured.

Police said Tuesday that they had previously tolerated desperate survivors taking food and water from closed shops, but had now arrested 35 people for stealing computers and cash.

“On the first and second day clearly no shops were open. People were hungry. There were people in dire need. That’s not a problem,” said deputy national police chief Ari Dono Sukmanto.

“But after day two, the food supply started to come in, it only needed to be distributed. We are now re-enforcing the law.”

“There are ATMs. They are open,” he added. “If people steal, we catch and investigate.”

Despite official assurances, desperation was evident on the streets of Palu, where survivors clambered through wreckage hunting for anything salvageable.

Others crowded around daisy-chained power strips at the few buildings that still have electricity, or queued for water, cash or petrol being brought in via armed police convoy.

“The government, the president have come here, but what we really need is food and water,” Burhanuddin Aid Masse, 48, told AFP.

Rescue efforts have been hampered by a lack of heavy machinery, severed transport links, the scale of the damage, and the Indonesian government’s reluctance to accept foreign help. (NAN)