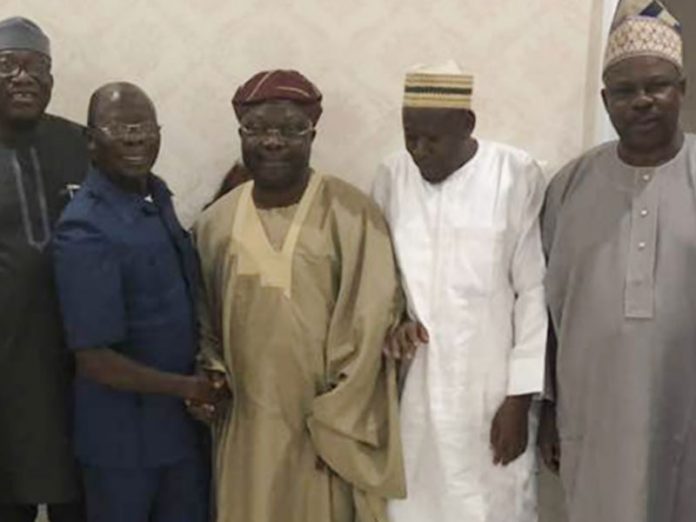 Nseobong Okon-Ekong and Yinka Kolawole in Osogbo, Gboyega Akinsanmi in Lagos and Adedayo Akinwale in Abuja

Last Saturday’s contest, in which 48 parties participated, could not produce a clear winner, as the Returning Officer, Prof. Joseph Fuwape, declared the election inconclusive on the ground that the margin of win between the two leading candidates was lower than the number of cancelled votes.
According to him, Adeleke scored 254,698 votes while his closest rival, Oyetola, was credited with 254,345 votes. Omisore got 128,049 votes to take the third position. He had to declare a re-run because the 353-votes difference between Adeleke and Oyetola were less than the 3,498 cancelled votes.

Omisore who came a distant third immediately became the beautiful bride being wooed by both the PDP and APC, largely because the contiguous Ife North and Ife South local councils are believed to be his strong hold even though they were won by the APC.

Omisore eventually decided on the side of APC wednesday even as the Conference of All Registered Political Parties in the state also declared support for its candidate, Oyetola.

The agreement, THISDAY gathered, might not be unconnected with details which emerged from the fence-mending meeting between Omisore and chieftains of the APC led by its National Chairman, Mr. Adams Oshiomhole, governor-elect of Ekiti State, Dr. Kayode Fayemi and Ogun State Governor, Senator Ibikunle Amosun, in Ile Ife.

Omisore whose party came third in the governorship election last Saturday, stands no chance of being elected governor after today’s supplementary poll.

Omisore made his party’s decision known at a press conference attended by the National Chairman of the SDP, Professor Yemi Farounbi, and other stalwarts in Ile-Ife.

The SDP candidate hinged his decision on the acceptance of his party’s manifestos, including payment of backlog of arrears to civil servants and pensioners in the state within the first three months of assumption of office by the APC.

Other conditions include payment of accumulated salaries to workers and pensioners in the state civil service, while workers must be trained and motivated.

He explained that SDP was left with no option than to pitch its tent with the APC after the PDP failed to respond to his party’s terms and condition for a coalition government.
Similarly, the conference of all registered political parties in the state has also declared support for the APC candidate, Oyetola.

This decision was made known at a press conference addressed by its Chairman, Prince Adesoji Masilo.

Meanwhile, details wednesday emerged from the fence-mending meeting between Omisore and chieftains of the APC.

Omisore, it was gathered, was promised some irresistible offers, including Senate presidency in the next dispensation.

The Senate President, Dr. Bukola Saraki, and former Vice President, Atiku Abubakar on behalf of the PDP, had also visited the former deputy governor in a bid to secure his support for the party’s governorship candidate, Adeleke.

THISDAY gathered from reliable sources that other irresistible offers to the SDP candidate in exchange for his support include the party’s senatorial ticket in 2019.

The APC team promised to persuade Senator Jide Omoworare to bury his ambition of returning to the Senate in favour of Omisore.

Both men are from Ile Ife in Osun East senatorial district.
To further convince the Ife-born politician to support the APC, THISDAY gathered that the APC delegation was said to have promised him two commissioners’ slots should Oyetola win the governorship contest and two House of Representatives seats.

The Acting Publicity Secretary of the APC, Mr. Yekini Nabena, however denied the suggestion that Omisore could become Senate president in a government controlled by his party.

However, former Minister of Aviation, Chief Femi Fani-Kayode, has described the decision to support the APC in today’s rerun election as shameful. Fani-Kayode said it was sad that the SDP governorship candidate would seek to deny Ile-Ife the position of deputy governor simply for money.

He added that Omisore assured him and Afenifere leader, Chief Ayo Adebanjo, two days ago that he would stand firm.

The former minister stressed that there was no excuse or justification for joining or supporting those who treated the people of Osun State like filth and slaves over the last eight years.

He said, “Omisore’s decision to support the APC in tomorrow’s rerun is shameful. It is sad that he would seek to deny Ile-Ife the position of deputy governor simply for money. He told me he would stand firm two days ago and he told our leader and father, Ayo Adebanjo the same thing last night. I do not know what has turned his head but we shall forge ahead and by God’s grace Adeleke will win.”

The Social Democratic Party (SDP) yesterday disclosed that the PDP refused to pursue alliance it proposed to forge with it on the Osun State governorship re-run.

The SDP, a centre-left political organisation, noted that the approach of the PDP was a threat to the alliance arrangement under the Coalition of United Political Parties (CUPP), which it said, was brokered to rescue Nigeria from bad government.

The SDP National Vice Chairman (South-west), Chief Olasupo Shonibare, expressed this concern in a conversation with THISDAY yesterday, lamenting that the proposed alliance to ensure the PDP defeat the APC in the governorship re-run failed.

Speaking with THISDAY yesterday, Shonibare explained the commitment of the SDP to the PDP’s alliance proposal, but the PDP refused to make contact to forge the alliance and work out strategies to ensure its victory in the governorship re-run.

After INEC declared the election inconclusive on Sunday, he said the former National Chairman, Chief Olu Falae, set up a five-man national team on matters relating to the re-run.

He added that the team waited for the PDP delegation “to make contact after the visit of the Senate President, Dr. Bukola Saraki, and his promise to come back on Tuesday. We waited all day on Tuesday till I left for Abuja while Yemi Farounbi was in charge.
“The PDP have not made contact. Instead of making contact, Senator Ben Obi was suggesting that the SDP national chairman should make a statement supporting PDP and Adeleke. It seems as if the PDP is avoiding to make contact, hoping they will either get the nod from court today or can go it alone.”

Despite the SDP’s readiness for discussion, Shonibare said the PDP “does not want to give Omisore or the SDP any bragging rights for having assisted. As much as we, leaders see the bigger picture, the stupid intransigence of PDP being demonstrated now will make the arrangement of the CUPP difficult to implement.

“It was adjudged that the PDP being the leading opposition Party at that election was the appropriate vehicle to engage. Saraki led a team of PDP leaders and promised to revert. In the spirit of the CUPP alliance, SDP Committee all assembled in Osogbo and waited for the PDP to make contact.

“As of this Wednesday morning, they are yet to do so. We understand the PDP has more faith in the Court process and may have decided it did not need any other Party’s support.”

PDP: We are Confident of Winning

Despite the coalition between the SDP and APC, the PDP has expressed confidence of winning the supplementary election.

The National Vice-Chairman (South-west) of PDP, Dr. Eddy Olafeso, stated this in Abuja while addressing newsmen in Abuja.

Olafeso said, “For us, we are very confident that victory will be ours tomorrow. We already won anyway.

“PDP is not bothered because our people are resolute. And they are desirous in ensuring that the victory denied us on Saturday will eventually be ours.

“We have spoken to our people and we are certain that their experience from the current administration is enough for the need for a change that will bring development to the nation.”

Meanwhile, Adeleke has written a letter to diplomatic missions in Nigeria, raising the alarm over threats to his life and rabid clampdown on his supporters ahead of today’s polls.

In the letter already dispatched to the United Nations, European Union, United States Embassy, British High Commission and other diplomatic missions in Nigeria, Adeleke catalogued the many infractions in the last Saturday’s poll, the refusal of INEC to declare him the winner in line with the constitution, the killing and maiming of his supporters, the arrest of key leaders on trumped up charges and the manipulations of the electoral process.

Adeleke said, “I am constrained to write this letter to intimate you, our diplomatic partners and friends of the despotic happenings in Osun governorship polls, which I won but for which I was not declared the winner. My life is under threat and leaders of my party are under siege before and after Saturday main polls.

“During the campaigns, we were subjected to countless attacks. I escaped about four assassination attempts. Our campaign vehicles were severally attacked and our rallies disrupted. We went through the pre-election process under constant onslaught from political thugs and merchants of violence.

“Despite the violence prone climate, I still won the election. On live television, our votes were removed and protestations for re-addition of the votes were rejected.

“Votes for the ruling party were jerked up and again the electoral umpire refused to correct the arithmetical errors. After all the manipulations which saw about 4,000 votes removed from my total votes, I still won by close to 400 votes.

“In a brazen assault on democracy, the returning officer in open breach of the constitution refused to declare me the winner even after fulfilling constitutional stipulations.”

Police Vow to Curtail Break down of Law and Order

The Deputy Inspector General of Police in charge of security in the rerun election, Mr. Joshak Habila, wednesday said the police would deal ruthlessly with persons with the intent to disrupt the exercise.

Habila who stated this at a press briefing at the police headquarters in Osogbo, said security was fully ready to comb all the areas slated for the rerun.

The police boss also made it clear that security arrangement were in order to deal ruthlessly with intent person to cause problem during the rerun.

He, therefore, urged all voters to conduct themselves well during the election.