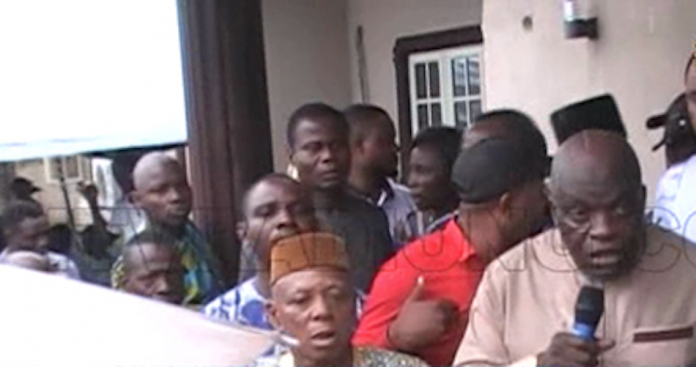 Some aspirants from Edo State have protested against decision to grant automatic  tickets to some lawmakers joining the All Progressives Congress (APC) in Edo State.

The aspirants who said they had petitioned the leadership of the party on  the issue, argued that the decision was dead on arrival, adding that they will resist it.

Speaking to journalists during the ongoing APC screening exercise in Abuja on Thursday, one of the aspirants vying for Orhionmwon/Uhumwonde Federal Constituency, Hon. Adaze Wilson Imafidon, described the move as fraudulent and illegal.

However, Imafidon said the decision was a brazen disregard for the September 11, 2018 procedure for nominating candidates/conditions for consensus candidature issued by the APC National Working Committee and reaffirmed by the Edo State Chapter ahead of legislative primaries scheduled for next month.

He said: “Recall that the National Working Committee in its directive/clarification on the procedure for nominating candidates stated that while consensus is provided for by the party’s Constitution, the option is conditional. Consensus does not foreclose Direct or Indirect Primaries for all elective positions. The NWC stated clearly that consensus will apply when no other aspirant signify interest, for example through purchase of nomination forms for the position in question.

“As you can see, aspirants from Edo State, particularly the Orhionmwon/Uhumwonde axis are being screened. We are all very much in the race. How can a group of people converge in a room, tag themselves stakeholders excluding aspirants, and announce automatic consensus candidacy for returning lawmakers? The decision is dead on arrival.

We will surely resist this fraud and illegality.

“We hereby draw the attention of the party’s national leadership under the Chairmanship of  Comrade Adams Oshiomhole to this fraud and illegality being perpetuated by the Orhiomwon Chapter of our great party.”