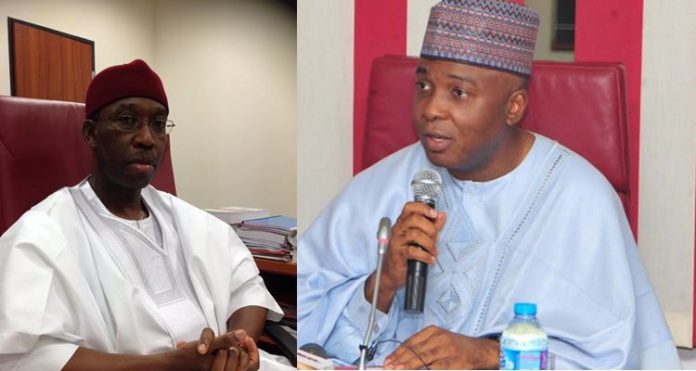 By Deji Elumoye in Abuja and Omon-Julius Onabu in Asaba

Saraki in a statement signed by his Media Adviser,  Yusuph Olaniyonu, said he would continue to monitor the situation and help ensure that all survivors receive necessary medical attention.

“My prayers are with the worshipers, affected families, Governor Ifeanyi  Okowa and the people of Delta State on this morning’s collapse of St. Paul Catholic Church in Okpe LGA. We will continue to monitor the situation and provide assistance to see that survivors are rescued and treated.

According to him, we must all come together as Muslims, Christians, people of faith, and most importantly, Nigerians to provide all necessary relief for the affected families and community. This tragedy affects us all and we join the Catholic community to mourn the deceased — even as rescue efforts are still underway,” Saraki explained.

On his part, Okowa, who expressed his sympathy in a statement by his Chief Press Secretary, Mr. Charles Aniagwu, described the unfortunate incident as sad, unfortunate and regrettable.

He promptly directed the State Commissioner for Works, Chief James Augoye, to visit the scene of the collapsed church to ascertain the circumstances surrounding the incident and what immediate assistance the government could provide to the injured worshippers and the church.

“The governor prayed for the repose of the departed faithful and condoled with the family of the deceased, the Speaker of the Delta State House of Assembly, Hon. Sheriff Oborevwori, Chairman of Okpe Local Government Council, Chief J.J. Scot; the Orodje of Okpe, Orhue I, Major Gen. Felix Mujakperuo (rtd), and the entire Ugolo community in Okpe Kingdom over the unfortunate incidence”, the statement added.

“This is indeed a very sad and unfortunate incident. It is our prayer that the soul of the deceased will rest in peace, and that the injured will experience quick recovery. Our thoughts and prayers will continue to be with the people of Ugolo in Okpe Kingdom over this tragedy,” Okowa said

In another development, Governor Okowa yesterday commiserated with the family of former Acting Managing Director of the Niger Delta Development Commission (NDDC), Power Ziakede Aginighan, who died in an auto crash alongside his son, Tammy, and a police orderly at Akinima, in Ahoada West Local Government Area along the East West Road.