Group Wants Retention of HYPREP in Environment Ministry 1 hour ago

He hailed Aregbesola’s government for being alive to its statutory obligations of  ensuring security of lives and property for the state’s resident since inception.

IGP Idris commended Osun State Government for creating an enabling environment for the officers and men of the Nigeria Police Force to operate effectively, proficiently and professionally.

The police boss gave the commendation while paying a visit to the governor at the Government House, Osogbo.

Idris was accompanied by the Commissioners of Police in Osun and Oyo, Olafimihan Adeoye and Abiodun Odude, and other top officers and men of the Nigeria Police Force.

Others in attendance include Special Adviser to the Governor on Security Matters, Mr. Tope Adejumo; Oluwo of Iwoland, Oba Abdul-Rasheed Adewale Akanbi; members of the State Executive Council, among others.

Idris who was in the state for a one-day security summit ahead of the September 22 governorship election said Osun government had done excellently well in the maintenance of law and order.

‎He said‎ Osun had been so supportive of the officers and men of the Nigeria Police Force through the provision of state-of-the-art security architecture.

Idris said the Police Headquarters in Abuja was fully aware of the state’s collaboration with officers and men of the Nigeria Police Force, a partnership he said had made Osun to be among the most peaceful states in the country.

Speaking on the purpose of his visit to the state, Idris said he came to Osun as part of his efforts to ensure adequate security before, during and after the forthcoming governorship election in the state.

He added that the mission of his visit was to attend a security summit with major stakeholder where security related issues would be discussed to ensure free, fair, credible, transparent and crisis free gubernatorial election in Osun.

According to him, “I am pleased and happy to be in Osun, I feel at home as I appreciate the state government on its support and cooperation for the officers and men of the Nigeria Police.

“I thank the state government most especially for the cooperation that has always been giving to our officers to work effectively and proficiently.

“We are happy that there is peace in Osun and we commend the effort of the state in ensuring that we have a very secured state.

“As a matter of fact, our visit to Osun is to gather major stakeholders for security summit to deliberate on the need to organise a free, fair, credible, transparent and crisis-free governorship election in the state and in Nigeria, as our country is moving towards another general elections.

“We will take the advantage of this summit to brainstorm on issues that will help us to organise an effective and rancour-free election at all levels”, he added.

In his remarks, the Governor of Osun, Ogbeni Rauf Aregbesola, applauded Idris for being effective, resilient and forthright in the discharge of his duties.

He said his administration had been blessed with committed, effective and proficient officers and men of the Nigeria Police Force since inception, saying all the police that have served and still serving have done well in the discharge of their constitutional responsibilities.

Governor Aregbesola who was represented by his Deputy, Mrs. Grace Titilayo Laoye-Tomori, said the state was prepared to do her best at ensuring peace before, during and after the ‎governorship election in the state.

He said his administration had raised the bar of good governance in all strata, particularly in the security sector, adding that the state has adequately extended hands of support not only to the Police but to all the security agencies in the state.

“We have done the needful to support all the security agencies particularly the Police as our administration has provided them relevant security architecture.

“We purchased 25 Armoured Personnel Carriers which have no rival in Nigeria; we also purchased patrol vehicles as well as surveillance helicopter among others to support the security sector”, Aregbesola a 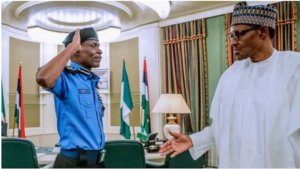