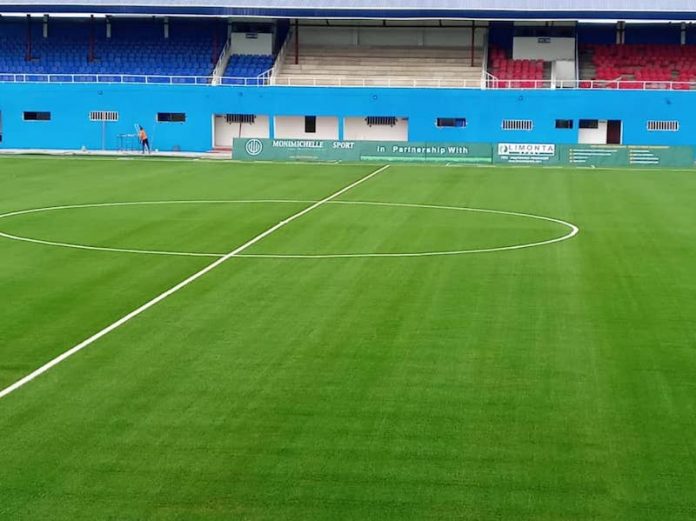 After almost three seasons of playing away from their fortress in Aba due to renovation work, CAF has given the newly refurbished Enyimba International Stadium the go-ahead to stage Wednesday’s clash with the Congolese. CARA defeated Enyimba 3-0 in the reverse fixture earlier in the campaign.

This approval followed the recent inspection visit carried out by CAF officials.

Abia State Governor, Okezie Ikpeazu, had last Sunday inaugurated the arena at a ceremony that included a novelty game with a team of former Super Eagles stars.

Enyimba Coach, Usman Abdallah, who was named as replacement following the sudden departure of Paul Aigbogun midway into their campaign, is enthusiastic of his wards progressing to the semis.

He is particularly excitement they are back to their fortress after playing in such places as the U.J Esuene Stadium in Calabar and the Adokiye Amiesimaka Stadium in Port Harcourt.

“It is positive development for us because it would be better playing at our home ground in Aba, though it will be the first time for some of our new players in the team.

“We are not going to be under pressure against CARA especially after the important away victory against Djoliba last week. I’m optimistic of a positive result in Aba,” the former Kano Pillar gaffer enthused yesterday.

Enyimba will rely on on-loan striker Sunday Adetunji and Mfom Udoh for goals on Wednesday to make a victorious homecoming and advancement to the semis a surefire deal.

“Finally, the hard work pays off. The @EnyimbaFC stadium has gotten approval from CAF to host CARA Brazaville on Wednesday and the rest of the club’s #TotalCAFCC matches. Back home for good now,” reads a tweet on the twitter handle of Enyimba’s Media Officer, Farriel Allaputa on Monday morning.

Wasiu Alalade who is one of the new boys in the team and is yet to play on the popular ground is looking forward to the Wednesday game with excitement.

“The Aba stadium is one of the most popular league venues in the country and it will be great to have the chance to play there soon,” he stated.

“I must confess everyone is looking forward to playing there again and it is going to be a massive experience for us.”

The Aba team is looking to become the first Nigerian club to win the CAF Confederation Cup just same way they ended the CAF Champions League jinx, winning it back to back in 2003 and 2004.