There were just 11 of us in the hall the day I went to see the new Tope Oshin movie, In Line, currently showing at the cinemas.

Of the 11, two of us were men and at the end of the movie, the eight women all rose as if on cue and gave a standing ovation.

I was sitting beside the ninth woman, Tope Oshin, the director of the movie, and I would have given an arm and a leg to have seen the expression on her face as that spontaneous acclamation went off in a half-empty movie theatre for a movie that was getting scant column inches online and off.

Two days later, tired of hearing me talk about In Line, my teenage children went to see the movie with their friends and their one word summation was pure millennial speak â€“ Awesome!

So, if people are clapping and calling it â€œawesomeâ€, why is the movie not filling up theatres? Poor publicity by the producers, I suppose. Movies donâ€™t sell themselves. Publicity is good and helps pull in crowds to cinemas. If I didnâ€™t know Tope Oshin, I probably would never have heard about nor seen the movie.

But it was worth my while. Shot in Ms. Oshinâ€™s usual sedate and unhurried pace, the movie tells the story of a couple â€“ Kate and Debo played by Adesua Etomi and new comer, Uzor Arukwe.

Debo has just returned home after six years in prison where he was locked up for killing his father. How does a murderer leave jail after six years? Watch this movie to find out.

This is a movie that pushes an agenda but the subject matter never intrudes, the sad story never descends into melodrama neither does the comic elements turn into farce. The director exercises artistic control, one that proceeds like a tightly wound spring unravelling at just the right pace.

Debo comes home to a cold reception from his wife and as he tries to grapple with his new reality and limited access to his heartthrob, his rage bobs up to the surface. He is a ticking time bomb waiting to explode. He has anger management issues and the only person who seems immune to his rage is his ex-girlfriend Bella aka Ama played by Sika Osei.

Back in the 80s, NTA premiered a made for television movie directed by veteran, Jimi Odumosu. It was a scary beast of a movie called Evil Encounter. The movie was what one would call a horror film or to use a subtler term, psychological thriller.
It wasnâ€™t horror as in The Exorcist, but what I remember was a prevailing sense of dread all through the movie. That was how I felt watching the Tope Oshin helmed In Line.

Shot in no more than five locations with her trademark minimalist touch, the movie proceeds on a sedate pace, chronicling the quotidian reality of a young, upwardly mobile couple.

Kate works in advertising, at a company she set up with Debo before he went to jail. She eats breakfast with David (Chris Attoh), Deboâ€™s best friend and lawyer, at a park. But beneath it all; the work, the dinners, the jokes and banter, lies something strange, something ominous and something stifling; that thing which is alluded to when Kateâ€™s brother tells her: â€œAfter what he did to you the last time, you should be worried about your safety.â€

Kateâ€™s brotherâ€™s warning foregrounds the flashes of rage and outright explosions from Debo. One night, convinced that his wife had been chatting with a lover, he grabs her in a choke hold that almost leaves her dead. Then when his brother in law visits and gets too mouthy, Debo gives him the beating of the century.

But it is not his outbursts that cause the most worry, it is rather his cagey, almost reptilian attitude. The suspicions of infidelity and complete distrust.

Scene after scene, even where there is no hint of a threat or violence, the director manages to convey a deep sense of dread and intimation of rage. That ability to sustain mood provides the movie with emotional gravitas one that keeps the viewer completely invested in the story. Watch out for goose bumps when Kate comes home from work and Debo welcomes her in the shortest apron ever and something deadly in his hand.

The actors give a good account of themselves â€“ Deboâ€™s ripped abs from working out in prison provides a convincing portrait of a beater-in-chief; Bella aka Ama is at the core of the movies comical heart while David is the liar-in-chief. Adesua Etomi is fantastic as the abused/cheating wife, who is scared one minute and calculating the next.

The movie ends with a twist in the tale, one that no one could have expected. The sweet wife left at the mercy of a raging husband and duplicitous lawyer pulls a fast one on both men in a coup de grace deserving of the applause it received at our screening.

It is credit to the scriptwriters â€“ Diche Enunwa and Temitope Bolade-Akinbode as well as director, Tope Oshin, that the end is not given away until, well, the very end.

And oh, please watch out for the account officer catching a cab. Awesome! 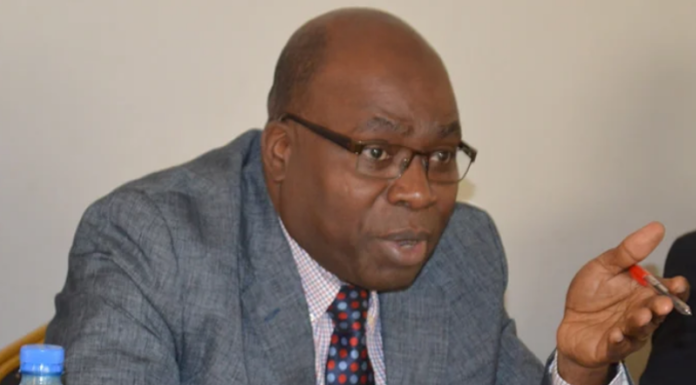