Ahead of the All Progressives Congress’ primary in Anambra State, David-Chyddy Eleke reviews the chances of aspirants jostling for the party’s ticket

Meeting in Awka, Anambra State capital recently, the All Progressives Congress (APC) South-east Stakeholders Forum consisting of some of the notable politicians in the zone assured members of the party of their determination to win Anambra State governorship election, and use it as a testing ground for their incursion into the region where they have only Imo State, with Owelle Rochas Okorocha as the governor.

Vice Chairman APC South-east, Dr. Emma Eneukwu; Minister of Labour and Employment and leader of the party in Anambra State, Senator Chris Ngige; chairman of the mobilisation committee for Anambra governorship election, Dr. Jim Nwobodo; National Organising Secretary, Senator Osita Izunaso and others who converged on Awka, all spoke in favour of credibility in the election of the candidate.

The stakeholders in unison agreed that the party would win the Anambra governorship election, but that the task ahead remained how to choose a credible and acceptable candidate for the election. While Eneukwu called on the aspirants to work as a team and support whoever emerges on the platform, Nwobodo agreed that the aspirants should see the incumbent governor of the state, Chief Willie Obiano as their common enemy and pull strength together to fight him, rather than fighting each other over the partyâ€™s ticket.

He expressed the view that if any one of the aspirants emerges, no matter who and such person gets the support of the others, ousting Obiano would be a very simple task for the party. Izunaso capped it all by giving the modality for the primary election of the party, saying that the party has agreed that for the primary election, for purposes of transparency, each aspirant would be handed the delegatesâ€™ list on purchase of the nomination forms.

In all, about 13 aspirants have indicated interest in the race on the platform of the party, but with the opening of the sale of forms, more aspirants have dropped by the way side. Only about eight have purchased the forms, two known aspirants in the race have stepped down for the senator representing Anambra South Senatorial District, Dr. Andy Uba.

A former deputy governorship aspirant to Ngige, Chief Ralph Okeke, who also has a large following in Anambra East and West federal constituencies, where he once represented as a lawmaker. Another strong politician from the Idemili axis of the state, Hon Charles Odedo has also dropped his ambition for Uba. Odedo, who had also represented Idemili North and South in the House of Representatives told his supporters that as much as he is very popular in the constituency, he would not be able to win the ticket of the party with just two local governments, so he sought to align with Uba whom he said was a likely candidate for victory.

As the date of the primary draws closer, there are indications that Ubaâ€™s strength is growing by the day. That is the more reason why some aspirants are determined to check his excesses. First, in the quest to checkmate Uba, a rumour was first sold in the social media that he had bribed the hierarchy of the APC starting from the national chairman with the sum of N500million.

Uba had however debunked the claim through his media office represented by Ndidi Kenedy-Ukaga. Ukaga stated that the rumour was carried by those who feared that Uba was already coasting to victory in getting the party ticket. He wondered why aspirants of the party would engage in such manner of dangerous politicking at a time when Uba was involved in issue-based campaign for the ticket of the party.

While still grappling with the implication of the bribery, rumours of a possible alliance by aspirants of the party to blackmail Uba out of the race surfaced. Though the rumours were peddled by masked persons, but it was clear that the target was Uba. Part of the plot was to present Uba as a new comer in the party who wanted to use his influence and wealth to whip everyone into line in order to pick the partyâ€™s ticket.

Apart from whipping up the sentiment that Uba is new in the party, they also claimed that APC usually favours candidates that are foundational members of the party or those who had been with the party for a long while. There is also the issue that Uba is from the southern zone of the state and as such, cannot be favoured with the ticket of the party at a time when the party was considering a someone from the northern part of the state to fulfil the wishes of those yearning for the northern zone to complete its second term, which the incumbent governor, Chief Willie Obiano started.

But on the other hand, most members of the party believe that fairness must take precedence in the party, and that the most popular aspirant should carry the day since what the party wants is victory. A media coordinator for Uba, Arinze Igboeli, told THISDAY that what is most important to the party was selecting a ‘sellable’ candidate who can win the election for the party. He described Uba as a forthright politician who through his stay in the Senate impacted the people of his zone and also empowered a host of Anambra indigenes through various positions he held in the past.

Arinze said, Uba as a Special Assistant to former president, Chief Olusegun Obasanjo and again as a senator for six year running now, has proven himself as a capable hand for the Anambra governorship job. He said that a number of bills have been presented on the floor of the Senate courtesy of Uba and that most of the bills were targeted at bettering the lot of Anambra people. He said the feat would be replicated in the state when Uba gets executive powers.

The fear of Uba by other aspirants in the party may just be getting more intense with the level of acceptance Uba has been receiving. Recently in Abuja, a political coalition consisting of about 15 political parties led by Chief Perry Opara announced the adoption of Uba as the candidate of their various parties for the Anambra governorship election.

Opera said the parties arrived at the conclusion after several meetings by the participating national chairmen. It said, â€œThough APC is not very popular in the state and the South-east, but it parades the best and most experienced aspirants in the Anambra race.â€

He added that after evaluating all the other aspirants on the platform of the party, its conclusion was that the aspirant that has the capacity to win the election, if handed the ticket of the party is Uba.

Not done yet, Uba has been surprising the members of the party in the state, leaving them with no option than to support him, despite the argument that he was relatively new in the party. Recently, at his country home in Uga, Aguata Local Government Aea, Uba called together the state and local government officials of the party and empowered them with 24 Toyota Sienna vehicles. All the 21 local government chairmen took home a vehicle, while the zonal chairman of the three zones in the state were empowered with the remaining three.

According to Uba, it was part of his contribution to the party to ensure that state officers work more swiftly and diligently. He said he was also told of the need to give the state party secretariat a facelift, and that he had already given instruction for work to commence at the secretariat.

He said, â€œAfter the facelift of the party, I went back to Abuja and told my friends of the challenge I have, which is how I can empower my state officers with vehicles, and they did not hesitate. They donated these vehicles I am giving out today and I can assure you that more will come. We know where we are going and we will ensure we carry everyone along in the party.â€

These words of Uba may be the soothing balm that has calmed the nerves of members of the party in the state and swayed them to his side. A senior member of the party who refused to disclose him name said, â€œIgwebuike (Uba) may be new in our party, but we love his spirit. How many of our old members have done what he has been doing since he joined us? I will not be surprised if he beats old members of the party to pick the ticket because in politics, overtaking is allowed.â€

To further instill fear in other aspirants about his acceptability, Uba arrived the APC party secretariat recently with a large number of politicians, including about 40 senators to pick the nomination and expression of interest forms of the party. This may have been the biggest show of acceptability both at home and at the national level, and may have further thrown fear in the minds of his fellow aspirants who feel he is a threat to their ambition. But as the August 19 date for the party’s primary draws closer, the coast is becoming clearer, as to who will be the party’s flag-bearer.

But as the August 19 date for the party’s primary draws closer, the coast is becoming clearer, as to who will be the party’s flag-bearer. 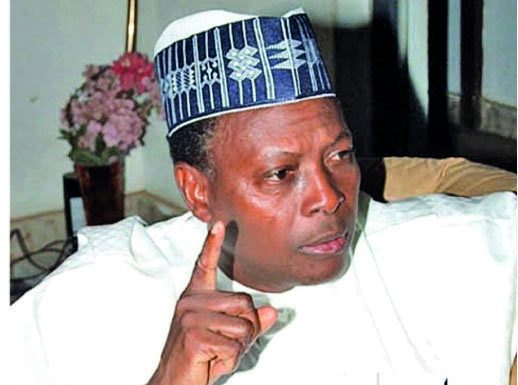