For the Record: Buhari’s Independence Day Address to the Nation (Full Speech) 22 hours ago

Buhari: We’ve Made Appreciable Progress But Not Yet at Our Destination 23 hours ago 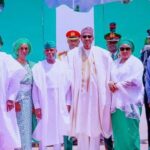 In its 2007 report, the African Peer Review Mechanism (APRM) of the African Union stated that “despite the solidarity and comradeship between black South Africans and the rest of the people of sub-Saharan Africa during the decades of struggle against apartheid and for liberation, foreigners, mostly of African descent, are being subjected to brutality and detention. Xenophobia against Africans is currently on the rise and should be nipped in the bud”.

Ten years after, xenophobic violence in South Africa has assumed epidemic proportions, punctuated by moments of exceptional viciousness. In the past two weeks, many South African nationals have taken the law into their hands and exacted brutal justice on Nigerians and some other foreign nationals on the flimsiest of evidence. At the last count, some 34 shops belonging to immigrants were looted in Pretoria, South Africa’s capital.

“Homes and shops of Nigerians were targeted and looted in the events of past few days,” said Emeka Ezinteje Collins, spokesman of the Nigerian Union South Africa (NUSA). Claiming to be after drug cartels and prostitution, the attacks in Pretoria West came few weeks after some South Africans in Rosetenville, a suburb in Johannesburg, reportedly torched cars and houses belonging to Nigerians and other immigrants.

Many unemployed South Africans have accused foreigners of taking their jobs and a local group actually marched last Friday to signal their indignation, particularly against Nigerians. The recent attacks were serious enough for some youths in Nigeria to attempt a reprisal as they invaded the MTN office, South Africa’s mobile giant company, in Abuja but were successfully repelled by the police. The youths have threatened to shut down South Africa’s owned businesses in Nigeria in a clearly misguided act of retribution.

While we call on the Nigerian authorities to move in quickly to avert any recourse to lawlessness, the fact remains that despite historical and business ties between Africa’s two pre-eminent countries, there is little joy in the memory as relations are badly scarred. A series of xenophobic violence targeted particularly at Nigerians since 1994 had seen to that. The 2008 tragedy led to the death of 62 persons in Johannesburg townships, many of them Nigerians. Another attack that same year also directed at African immigrants from countries like the Democratic Republic of Congo, Ethiopians, Nigeria, Mozambique and Malawi, was carried out without consequences.

In April 2015, a spate of violence directed against African immigrants claimed seven lives. That particular violence was exacerbated by the pronouncements of Zulu king, Goodwill Zwelithini, who lamented that foreigners were making life difficult for South Africans. Perhaps the latest violence was an additional tribute to the monarch’s laid down law: “We are requesting those who come from outside to please go back to their countries. The fact that there were countries that played a role in the country’s struggle for liberation should not be used as an excuse to create a situation where foreigners are allowed to inconvenience locals.”

Noteworthy is the fact that, like previous violence, there were warnings that the nationals of other African countries running shops, stalls and other businesses within the informal economy were gradually becoming endangered. But the South African authorities have not shown sufficient will or capacity for dealing with the problem.

Now that Nigerian residents in South Africa feel sufficiently threatened enough to alert our government on their fears, it is time to act to save them. But it is also in the interest of South Africa to protect our citizens from what has become hate mongering since they have far more to lose should there be a reciprocal response from the Nigerian authorities as many of our citizens are now openly canvassing.

Considering that South Africans also do businesses and are allowed to move freely in our country without let or hindrance, the federal government must make it clear to their authorities that they bear responsibility for the lives of Nigerians in South Africa. But beyond that, President Jacob Zuma and his government must deal with the challenge of xenophobia that puts a dent on the image of South Africa and indeed on the continent.