The ongoing efforts by Federal Government to purchase weapons needed for the counter-terrorism operations and lift the restrictions placed on Nigeria by the United States (US) Leahy Law is beyond the current cordial relationship between Presidents Muhammadu Buhari and Barrack Obama administrations, THISDAY has been told.

Concerns are mounting against the backdrop of the fact that Nigerian arms’ stockpile are depleting in the face of resurgent Boko Haram terrorist attacks and difficulties imposed by the US arms embargo.

But former Director of the State Security Service (DSS), Mr. Mike Ejiofor, in a chat with THISDAY yesterday on the issue, said lifting the sanctions requires more efforts than what the goodwill Nigeria currently enjoys from the Obama administration could solve.
Ejiofor called on the federal government to expedite action in this regard following the unpredictable nature of the US President-elect Mr. Donald Trump and recent report that the Leahy Law-based arms embargo could hamper the planned purchase of attack aircrafts from Brazil and other regions.

“Moreso, I don’t see President-elect Donald Trump working closely with Nigeria because of his isolationist policy of ‘America First’,” he said.

Abubakar, who gave a breakdown of the expected aircraft to include four Mi-35m attack helicopters from Russia, three Super Tucano from the Brazil and three JF-17 Thunder from Pakistan, however, said the ongoing US arms embargo would not stop the countries in question, especially Brazilians from selling the A-29 Super Tucano fighter aircraft to Nigeria like it did to Israel in 2014.

He further assured that despite the arms embargo, the US has in recent times shown willingness to assist in the country’s counter-terrorism and counter-insurgency efforts in the North-east.
“All I can tell you is that the US is supporting in the North-east, they are helping us with a lot of intelligence, so I don’t see any reason why we should have difficulties,” he insisted.

Nevertheless, Ejiofor has disclosed that the law was imposed on Nigeria during the time of late Gen. Sani Abacha, contrary to popular belief that it was during the immediate past administration of  President Goodluck Jonathan.

The security expert however, noted that past administrations did not make any effort to lift the sanctions because Nigeria did not feel the impact on time.
According to him, Leahy Law only became prominent during Jonathan’s administration as a result of the emergent security situations and urgent need for arms for counter-terrorism operations.

He said: “From the reports we learnt that US arms embargo stood in the way of Brazil supplying attacks aircraft to Nigeria similar to what happened under the former President Goodluck Jonathan. People are talking as if this embargo started under President Jonathan; no, it was there even during the time of former President Olusegun Obasanjo.
“In fact, the Leahy Law was placed under the late Head of State, Gen. Sani Abacha but subsequent governments did not make efforts to repeal the law. So there is nothing President Buhari or Obama can do until members of the Congress reverse the law or the embargo is lifted.”

According to Wikipedia, the Leahy Law or Leahy amendment, made in 1996, is a US human rights law that prohibits the US Department of State and Department of Defense from providing military assistance to foreign military units that violate human rights with impunity. It is named after its principal sponsor, Senator Patrick Leahy of Vermont.
In addition to the arms embargo, Ejiofor listed the dire economic situation hampering funding, asymmetric nature of the conflicts and depleted arms stock as the major issues affecting the ongoing war against terror in the North-east of the country.

In the same vein, he noted that factionalisation of Boko Haram and the quest for each group to announce its presence and relevance could account for the rise in terrorist activities since the release of the Chibok girls.

The Chairman and Chief Executive Officer of Apex Safety & Security Consultants Ltd, also warned against giving deadline in asymmetric warfare like the operations against Boko Haram.

He said, “One thing you must know is that the military and security institutions are not immune to the general economic situation in the country. So there is a general economic situation, which has also impacted on the security sector. Consequently, the weapons, arms and ammunition we have now in stock might be depleting with no replacement yet coupled with the existing arms embargo from the US.

“If you remember, this was what initially happened and hampered operations in the last administration and the reason why we had the success towards the end was the acquisition of some of the needed weapons from countries of the East.

“I want to also emphasise that anybody who want to gives a time-line (deadline) to terrorism does not understand that we are fighting an asymmetric warfare. This is coupled with the fact that while the government might be negotiating or have negotiated with one faction of Boko Haram, the other faction would want to announce its existence and relevance by this surge in suicide bombings and attacks. So it’s not as simple as people might think.

“So the key issues and challenges the counter-terrorism operations are facing and why there seems to be a surge and success in the recent terrorists attacks are: asymmetric warfare, arms are depleting and arms embargo by the US,” he added.

On the issue of moles, which is another serious challenge in addition to the three stated earlier, Ejiofor said the military must have an internal mechanism of purging itself of those informants.

The Niger Delta Professionals in Banking and Financial Sector (NDPBFC) have praised the management team of Heritage Bank for its professionalism, which has kept the fledging bank in good financial standing.

The group, made up of banking and financial sector professionals from the Niger Delta, spoke in Abuja yesterday against the backdrop of social media speculations aimed at de-marketing the bank which recently got a clean bill of health from the Central Bank of Nigeria.

“The management team at Heritage Bank has shown resilience and tenacity. They have shown that they are not the type of bankers that would bend the rules of banking to accommodate unwholesome interests,” the head of the group, Mr. Joshua Amachre, said at a press conference, stating that the bank remained one of the healthiest banks in the country.

The social media had trended stories of alleged distress of the bank, claiming that it was heading for insolvency. But the apex bank, saddled with the responsibility of oversighting the banking sector had issued a strong rebuttal of the distress claim, assuring that Heritage Bank was sound.

“The Central Bank of Nigeria wishes to state that Heritage Bank is not in distress and as such its depositors should go about their transactions without fear. For the avoidance of doubt, we wish to further state that no Nigerian bank is in distress,” the CBN’s Director of Corporate Communication, Mr. Isaac Okoroafor, said in a widely publicised statement.

Citing the CBN position, the Niger Delta group said the bank’s customers, critical stakeholders and the general public should be mindful of an on-going plot by certain persons to attempt to use the media, particularly the social media platform, Sahara Reporters, to tarnish the reputation of Heritage Bank, and, therefore, disregard stories of its distress as a malicious falsehood.

It traced the travail of the bank to the refusal of its management team, led by Mr. Ifie Sekibo, to allow insider or other unwholesome dealings in the bank.
“The truth is that Heritage Bank is contending with some powerful persons and their associates who are opposed to the astronomical growth of the bank. You also have another category of persons who want the bank to continue to do business as usual at a time all the banks in Nigeria are coping with the downturn in the economy and of course the withdrawal of public sector funds from all commercial banks,” the group said.
The group’s head, Amachre, said the bank’s management had been acting in the interest of its shareholders by resisting influences that could undermine the projections and general wellbeing of the bank.

He said: “We are all seasoned bankers and financial professionals with decades of experience in the financial sector, so we can talk authoritatively on the state of affairs in any bank in Nigeria. If you go through the history of banks that have had problems in this country you would easily trace their problems to unwholesome influences that sometimes lead to insider dealings. The management team at Heritage Bank has shown resilience and tenacity.”

He said because of the bank’s managers to grant unsecured loans, the powerful insiders and businessmen who had been denied such loans had resorted to using the social media to blackmail it.

“Heritage Bank is not a place where supposed powerful influences can overwhelm or overawe the managing team to access huge unsecured loans,” he said, adding: “Heritage Bank remains one of the best managed banks in Nigeria and that is why the bank remains relatively healthy in spite of the harsh operating clime. So they truly cannot genuinely speak ill of the bank.” 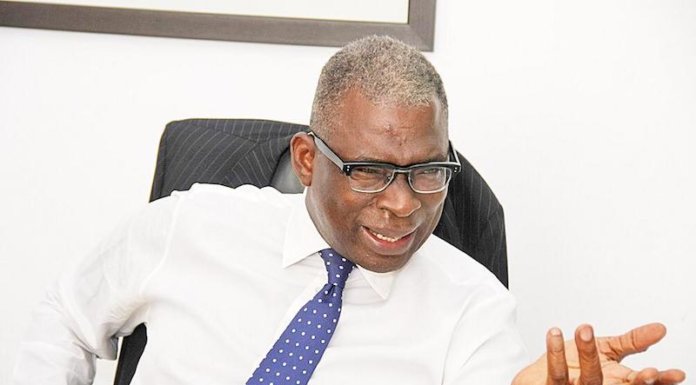