The Delta State Commissioner of Police, Mr. Zanna Ibrahim, has expressed his determination to lead the state police command on an anti-corruption crusade intended to radically change not just the poor perception of the average policeman, but also in the way the police and public interact, writes Omon-Julius Onabu

By his own admission, the police in Nigeria is stamped with unsavoury reputation due to the institution’s association with sundry vices including bribery, extortion, abuse of power or lawlessness. However, his public declaration, during the week in Asaba, of his determination to turn the tables around by midwifing an attitudinal change in officers and men under his command would aptly put the Delta State Commissioner of Police, Mr. Zanna Mohammed Ibrahim, on the spot or otherwise make him the cynosure of most Nigerians. The commissioner last Tuesday led officers from various commands and divisions across the state to tee off the state police anti-corruption campaign. He stressed that he expected nothing short of deliberate “attitudinal change from all policemen in the command.”

Unveiling the campaign instruments
CP Ibrahim, who was joined by high-ranking officers drawn from the different commands and divisions across the state, however warned that government officials and private citizens as well as policemen would be involved in the crusade to discourage corruption in the society. Handbills and posters with various messages on the campaign were unveiled and subsequently displayed by the commissioner and senior officers including respective divisional police officers (DPOs), before a horde of newsmen at the Police Officers’ Mess at Okwe, Asaba, venue of the launching ceremony. And, as the cameras flashed and clicked away, the commissioner reminded the jam-packed hall that the various inscriptions on the colourful posters and handbills were meant to find practical expressions in the manner policemen and other citizens conducted themselves both in their public as well as private lives.

Watching the watchdog
THISDAY asked CP Ibrahim how the authorities would guaranty that those charged with playing the arrowhead role in the anti-corruption war do not take undue advantage or misapply the rules? As a safeguard, the Delta State Police Commissioner disclosed that the state police ‘X-Squad’ has been reorganised to discourage corruption such as bribery, extortion and other practices that tarnish the image of the police force and policemen in Nigeria. “Credible persons have been carefully selected and deployed to serve in the X-Squad,” he revealed. He further disclosed that an under-cover unit comprising mainly plain-cloth policemen has also been constituted to monitor the activities of the X-Squad, simply to keep members of the special anti-graft unit on their toes and from compromising their privileged position.

An all-embracing war
Nonetheless, Ibrahim warned that no citizen in the state would be left out in the drive towards the “Change Begins With Me” mantra of the Federal Government, or would anyone be free from the anti-corruption dragnet. He added that political appointees, civil servants and even journalists must watch their backs as the exercise would be non-discriminatory. While admitting that he was actually replicating what the Inspector-General of Police, Ibrahim Idris, had done at the national level in Abuja recently, Ibrahim said that his command was “launching its crusade against corruption and ‘change begins with me campaign’ “, against the backdrop of the command’s “unalloyed commitment towards an improved service delivery to Deltans.

“Let me say here that the war against corruption as envisaged and directed by the IGP is not targeted at policemen alone; but will be extended to other government agencies and their staff. Therefore, all civil servants are advised to eschew all forms of corrupt practices in their official engagements as there will be no sacred cow in this war.”

‘Operation Eagle Net’ launch
Ibrahim said, “As part of our untiring strategies to ensure that criminals, especially of heinous crimes, are wiped out from the state so that Deltans can live in an atmosphere of peace and safety, the Command is today rolling out the Eagle-Net which will complement the efforts of other existing operational outfits.”

He warned all criminals to change their ways as the police command was intensifying efforts daily to make the state “very uncomfortable” for them, saying “henceforth, there is no more place to hide in Delta State for the eyes of the eagle can see from afar when in search of its prey.”

Ibrahim commended Governor Okowa “who, on behalf of the state government recently donated 10 Toyota Hilux vans” to be used by the newly created unit. “It would be recalled that not too long ago the amiable Governor of Delta State, His Excellency Senator (Dr.) Ifeanyi Arthur Okowa donated to ten (10) Hilux vehicles to the command. Today, we are handing over these vehicles to the O/C Eagle Net and it is hoped that the vehicles would be put to efficient use in line with our earlier pledge to the Governor and Deltans.”

The state police boss noted that the tactical police unit would complement the activities of other units like “the Special Anti-Robbery Squad (SARS), the SAKCCS, DRAGON, and Safer Highway Patrol etc in tackling the menace of hoodlums in all parts of the state.”

The highlight of the new anti-crime squad was an energetic exhibition or display by members of the Operation Eagle Net squad led by its commander, Mr. Usman Dimka, an assistant superintendent of police (ASP) at the Mess and at the police headquarters on Okpanam Road. Adorned fully in their new combat kits and armed to the teeth, the youthful ‘mobile policemen were awe-inspiring as they drew the silent admiration of little groups of members of the public that gathered to watch the “show”. Their skins glistened with sweat beats as they sang, marched and danced as though oblivious of the scorching November sun bearing down Asaba mercilessly.

Bust kidnapping gang
Incidentally, the day also saw the commissioner parading a number of criminal suspects before newsmen at the mess. They included persons arrested for alleged involvement in criminal activities including armed robbery and burglary, ransom kidnapping, swindling or “419” and car snatching. The Police Commissioner also revealed that four armed robbery suspects had died during separate exchange of fire encounters with the police.

Aside the five kidnapping suspects and four armed robbery suspects, 10 were arrested in connection with violent cult activities while 13 others were picked up for alleged economic crimes or sabotage, piracy and cult-related murder. Highlights of the parade before newsmen of arrested suspects in connection with various crimes alongside the recovered items including about N1.8 million cash, several cars, arms and live ammunition.as well as an assortment of charms.

Among the suspects paraded during the press briefing at the state police headquarters in Asaba by the state Police Commissioner was 30-year-old Joshua Ufuoma Okoh, alias ‘Onos’, who confessed to being the leader of a kidnapping gang based in Udu, a neighboring town of Warri. The gang leader, who said that he was working as a generator repairer before he took to the “more lucrative” business of ransom kidnapping, said that he could not tell why he was always attracted to criminal activities. He admitted that nemesis might have caught up with him so that he might be reconciled to God at last whether he died or regained his freedom eventually.

THISDAY however learnt that nemesis actually caught up with the suspects, who the police described as “members of a notorious kidnapping gang” when the police got a tipoff of an impending plan to abduct a 77-year-old woman in Udu area, near Warri in the state, last week. This, according to police detectives, was after the gang had reportedly collected a three million naira ransom following the kidnap of a Benin-City (Edo State)-based woman in Edjeba area of Warri on October 30, 2016. One Anthony Oren, said to be the vigilante chairman of Arhakpo community in Udu was also arrested for allegedly “concealing criminals.” 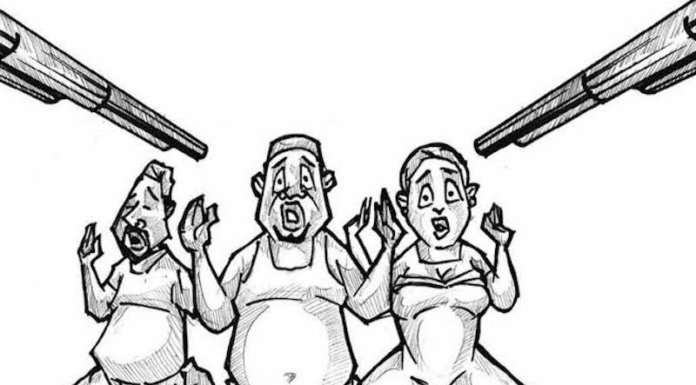