Beyond building a business empire in the telecommunications industry, the promoters of the Globacom brand have demonstrated their quest for a better society in a new TV satire built around ‘Professor Johnbull’, who plays the role of a social crusader. Raheem Akingbolu reports

Recent developments in the country have shown that the corporate Nigeria is advancing well in the understanding of the concept of Corporate Social Responsibility. Against the belief of the yester years, when organisations and individuals assumed that CSR was all about pulling resources together to provide some social amenities, top players in the various sectors are already changing the trend. In line with international standard, companies in Nigeria are now looking beyond physical structures –they are approaching CSR in unconventional ways to re-orientate Nigerians.

On Tuesday last week, Nigeria Television Authority (NTA), aired the maiden edition of a new television drama series, tagged ‘Professor Johnbull’ on its network service. At the beginning, the drama didn’t move this reporter because of its humorous presentation but after a while, it turned out to be a powerful message presented in a satirical way to teach morals.

Sponsored by Globacom Nigeria, the drama is obviously the contribution of the brand to help Nigeria win the war against social devoid vices. It has since been confirmed that the drama is also being aired on NTA International and Startimes.

In the maiden episode titled “Claimant”, the drama throws sardonic barbs at impersonation of successful celebrities, one of the rampant vices in the country which falls under the broad rubric of “419”. It’s practiced by misguided individuals who name- drop and are desirous of getting rich quick without hardwork.

One of the characters in the series, Makuachukwu Ilodibe impersonated the Koko master, D’banj by dressing like the megastar and interspersing his speech with the refrain “I’m D’banj!” to scam unsuspecting members of the public including the lead character, Professor Johnbull acted by the inimitable Kanayo o. Kanayo. The erudite Professor met the fake D’banj at a restaurant owned by Olaniyi starred by Yomi Fash Lanso and tutored him on the essence of his sobriquet, Kokomaster which the Professor inadvertently interpreted to mean cocoa.
The drama deploys series of exciting discourses hallmarked by the characters’ peculiar locutions and dictions to highlight the conflict between the fraudulent impostor who got invited to the house of Professor Johnbull, the acclaimed opinion leader in the society where he inevitably met his waterloo.

The deceit was exposed when Professor Johnbull’s engineer son, Churchill, who was the impostor’s school mate, disclosed his real name and gave him a beating for lying as he was wont to do from their school days. Olaniyi, the restauranteur, also joined in punishing the impostor for deceiving him by eating free food along with his two friends. Professor Johnbull gave the denouement as he made didactic closing remarks on the repercussions of impersonation.
Earlier, the episode opens with Caro, the semi-literate house girl acted by Mercy Johnson-Okogie turning the letter “p” written on a newspaper upside down to change to “d” and claiming she was performing magic when queried by Professor Johnbull. The grandiloquent man of letters tongue lashed her, concluding “I have been cohabiting with the very witch of Windsor herself”.
This scene was closely followed by the entry of Churchill clutching a newspaper and gleefully announcing the news that the Koko Master was billed to perform in Enugu, their location. The drama then morphed into the scene where the impostor and his two friends arrived Olaniyi’s restaurant to get the best amala in town.
The drama series, Professor Johnbull, ignited a sense of déjà vu in select viewers who thanked Globacom for giving them sublime comedy which they had not savoured in recent time, thereby enriching their television experience.

Synopsis
Retired Professor Johnbull Eriweagwuagwu Macathy Macnwigwe, a widower, relishes using grandiloquent expressions. He lives with his engineer son, undergraduate daughter and star-struck wannabe housemaid in an upscale neighbourhood in Enugu, South East Nigeria where he is; (by virtue of his academic and social exposure, which includes but is not limited to a Phd from a foreign university as well as a long lecturing career) the voice and conscience of the people.
His house, by virtue of his pedigree, has become a melting pot where people from different segments of the society often congregate to discuss contemporary issues and drink from Professor John Bull’s fountain of wisdom.
His son Churchill Ikenga Macnwigwe, an engineering graduate, is interested in pursuing a career in music against his father’s wish.
His daughter Elizabeth is a year two Psychology undergraduate who is a dyed-in-the-wool but self-assured replica of her father. She is close to her father but generational issues always come up.
Caro is the semi illiterate house maid of the family and a great challenge to Elizabeth who routinely toils to improve her literacy and social construct.
Apart from the dramatic events in the professor’s house, there are other major characters whose lives and activities are interwoven with that of the professor and his household. The drama series explore social satire to shed light on contemporary issues affecting Nigerian youths.

Sound track
To complement the setting and story line, the unseen hands behind the drama cleverly settled for urban high-life maestro and Glo ambassador, Chinedu Okoli, popularly known as Flavour, to compose a scintillating sound track for the T. V social satire series.
The sound track highlights the key messages which the drama series seeks to send across to the teeming audience. It revolves around the central character, Prof. John Bull, played by Nollywood legend, Kanayo O. Kanayo, and focuses on the grandiloquent language which the professor is famous for.
The sound track concisely summarises the plot and storyline. For instance, it repeatedly hails the erudite scholar who has travelled round the world acquiring knowledge and enlarging his vocabulary.
The rhythm and beat of the sound track, originally produced in Igbo, are typical of Flavour’s urban high-life music genre and style and is full of eulogies for the professor.

Radio stations across the South East and South South states such as Enugu, Ebonyin, Anambra, Abia, Imo, Cross Rivers, Rivers and Akwa Ibom have started blasting the song massively on their stations while music lovers have been urging On-Air-Personalities to play the soundtrack during phone-in programmes. For instance, the song was said to have been heard repeatedly on Dream FM 92.7 Enugu and other stations on recently.

Endorsements
In a telephone interview with this reporter, the lead character in the drama series, Kanayo O. Kanayo, described the song as perfect. He said: “the sound track for this drama series is just apt and awesome. In-fact, I was marveled when I listened to it. It just summarizes what the drama series is about. It encapsulates the story-line”
Meanwhile, the producer of the new TV drama series, Tchidi Chikere, has said that Nigerians will be full of gratitude to Globacom for bringing back social satire to the Nigerian entertainment industry.
Chikere who made the remarks on the set of “Prof. Johnbull” in Enugu said the TV series “is a hilarious satire that will appeal not only to the young at heart but also to everyone that can appreciate drama and its ability to correct social ills”.
“It is high time we had more corporate bodies coming to support the entertainment industry like Globacom is doing. Honestly, I think it is highly commendable that Globacom has moved from just endorsing entertainers as brand ambassadors to sponsoring full productions as Executive Producers”, the ace producer said.
He however lamented the dearth of comedy series in the country, and noted that the last ones the country had were years back when the Village Headmaster was running.

With the drama series, it is obvious that Glo has scored another goal as it will both entertain and win more patrons for the brand. 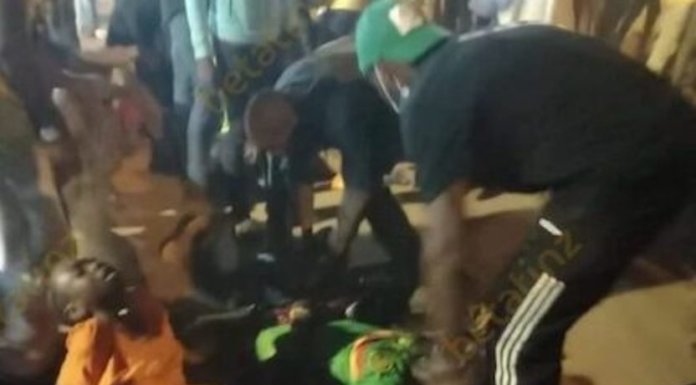