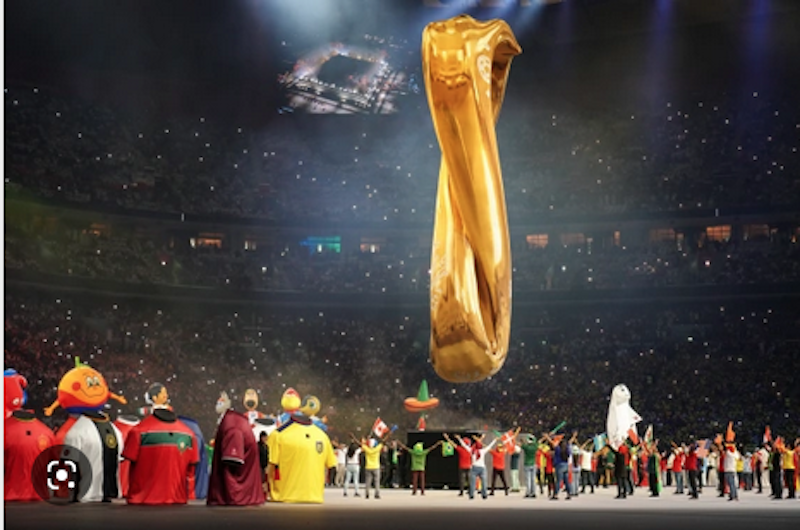 Welcome to my world here in Doha for the 22nd edition of the FIFA World Cup which kicked off yesterday in this beautiful country in the Middle East. I will be bringing you stuffs outside the matches you will see on your television sets. It promises to be an exciting time out here as we rock this World Cup in eight magnificent stadiums. Stay tuned!

As you must have heard, this World Cup in Qatar is not like any other one you probably must have attended in the past. It is one tournament that is taking place almost in one city! The farthest stadium from the city centre in Doha is a brisk 25 minutes drive. All of them are linked up by metro from all parts of the city. This, according to the organisers, is to ensure that there are no gridlocks in this compact city of almost 2.7 million people. With anticipated influx of another 1.5 million people coming to attend the matches from around the world, the metro, a means of mass transit, is expected to save the travelling fans and residents many hours of stay in traffic.

With transport problems solved, accommodation remains the biggest headache of the budget fans in Doha. Most of the average hotels which are few and in between, are fully booked. With the five-star hotels averaging between $900 to $1350 per night, you now can understand the dilemma of the average fans who want to come and enjoy the games here. Most of the private property put out for rent have also gone beyond the reach of most fans. They are almost as expensive as the big hotels. Even the FIFA Fans apartment meant to help cussion the accommodation ‘wahala’ are out of the reach of these average fans at between $149 and $199 per night. Several of the fans that booked are even complaining that the quality portrayed before they paid is not what they are getting.  Just a tiny bed, barely six-spring type plus a standing fan, they insist, is not worth the value of the money they paid.

This perhaps, may have informed why some Nigerians and fans from other African countries resorted to sleeping in mosques and churches. But alarmed at what these travelling fans were turning their places of worship to, Qataris have now placed these facilities under locks and keys!   Don’t ask me if they are sleeping under bridges because I am yet to see any one in such places yet!

Inability of the Super Eagles to qualify for the FIFA World Cup 2022, apart from the pains it has caused Nigerian fans and business opportunities missed at home, is being felt here at the Main Media Centre in Doha. Even before Nigeria qualified for her first outing at the 1994 edition hosted by USA, Nigerian sports journalists have been amongst the largest contingent from Africa. Our ‘swagga’ and noisy atmosphere usually stand us out to the envy of some of our African brothers. But that is seriously missing here now. You can hardly find more than three or four in the Main Media Centre working at a time. Tough exchange rate back home, airfare and the accommodation hassles here have limited the numbers of us here at the moment. It is even not expected to increase even as the matches progress from the group stage to the knock out rounds. This is a total departure from what happened at the last edition in Russia, four years ago.  Now, the implication is that Nigeria’s media accreditation quota is likely going to drop due to the ‘No Show’ at the next edition in 2026 to be jointly hosted by USA, Canada and Mexico.

The No Alcohol Rule

One of the many worries of some fans from Europe and the Americas before arriving here in Doha was the strict rule on alcohol consumption during the tournament. As an Islamic country which forbids sale and consumption of alcohol, it was obvious that those who cannot do without drinking alcohol were going to have issues. Of course, there was hope for them when Qatar relaxed the rule and only insisted that alcohol will not be sold around the stadiums. But some of the fans who arrived much earlier and began to quaff the stuff in full measures unrestrained, forced the return of a stricter pronouncement. Now, FIFA has insisted that no drinking of alcohol for three hours will not kill anybody. Lets see how this plays out. I am yet to see the ‘Man and Man’ kissing that pervaded most areas of La Republica during Brazil 2014.