When NNPC, Security Agents Take Oil War to the Creeks 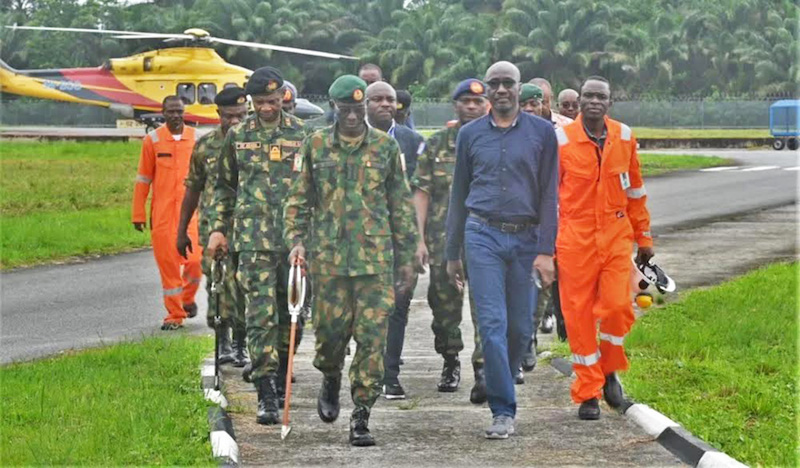 For a country with a worrisome level of reliance on borrowing to make ends meet, the recent allocation of 1.8 million barrels per day crude oil production figure by the Organisation of Petroleum Exporting Countries (OPEC) couldn’t have come at a better time.

This is because, on paper, daily production of 1.8million barrels of oil would have guaranteed the execution of the various capital projects lined up by the current administration, quenched the thirst for dollars at the foreign exchange market, as well as reduced the penchant for running to the debt market for budget support in a frightening dimension which the exercise has assumed.

Unfortunately, figures of crude oil and condensate production data for September 2022 emanating from the Nigerian Upstream Petroleum Regulatory Commission (NUPRC) show that rather than cashing in on the OPEC’s gesture, crude oil production has continued to tumble to as low as 937,766 barrels per day as recorded for September this year.

Two weeks ago, President Muhammadu Buhari had presented the 2023 budget proposal to the National Assembly. The highlight of the N20.51 trillion budget was the deficit of N10.78 trillion, a development which has elicited fears and anguish from members of the society who lamented that ours is a country that complains amid plenty.

Taking the War to the Creeks

Judging by the accounts of journalists, security agents and government officials who formed members of a special purpose team currently cracking down on oil thieves in the Niger Delta areas, the degree of sabotage to the Nigerian economy is perplexing.

According to ex-militant Government Ekpemupolo, also known as Tompolo whose security company, Tantita Security Services is assisting the Nigerian security agencies to flush out the criminals from the creeks, there are 58 illegal crude oil tapping sites in Bayelsa and Delta states.

His revelation came after the Nigerian National Petroleum Corporation (NNPC) Limited disclosed that a 4-km illegal pipeline was discovered in Delta State. Tompolo’s firm was contracted by the NNPC to secure the pipelines in the Niger Delta region.

The illegal 4-km pipeline is said to have been in operation for nine years, almost two years before the inauguration of the administration of President Muhammadu Buhari.

Earlier, in a move to curb Crude Oil Theft and other maritime crimes, the Nigerian Navy launched Operation Dakatar De Barawo, a Hausa word for ‘ Stop The Thief’, on April 1, 2022.

The operation which was carried out in the three states of Delta, Rivers and Bayelsa has reportedly led to the arrest of 102 suspects, with the deactivation of at least 447 cooking camps.

A breakdown of this figure showed that 215 cooking camps were deactivated in River State, 132 in Delta State and the rest in Bayelsa State

Over 100 barrels of crude oil and 60 million litres of AGO and DPK were seized during the raids of several cooking creeks in the three states in the last five months.

Also, 132 wooden boats used to ferry crude oil and illegally refined products to sale points were seized in Rivers, 75 ` Delta and over 30 in Bayelsa.

Although it’s the military that is leading the current offensive against oil thieves, some Nigerians warned the federal government not to ringfence the military and the NNPCL officials from the probe of oil theft in the country.

This is the position of an elder statesman and former Minister of Information, Chief Edwin Clark, who called on the federal government to constitute a judicial panel of inquiry to probe the military and officials of the Nigeria National Petroleum Corporation (NNPC) over activities of oil theft in the Niger Delta region.

He argued that there was no way the sophistication needed for the oil theft could take place without the connivance of the security agents and NNPCL officers, saying crude oil theft has been going on in the region under the watchful eyes of the military.

Caught in the Act

To show that the ongoing war against oil thieves is not a joke, officers of the Nigerian Navy in Delta State last week destroyed an illegal oil bunkering vessel arrested with stolen crude oil aboard Niger Delta creeks by Tantita Security Services alongside its seven-member crew on the creeks of Escravos, while crude oil was being loaded illegally into the ship.

About 600 to 650 cubic metres of illegally lifted crude oil in five compartments were said to be on board the vessel with registration number L85 B9.50 at the time it was arrested.

There are reports that aside from Tompolo’s disclosure, 265 illegal refineries were also discovered in the Shell Petroleum Development Company (SPDC) corridor.

For example, the operational tour of the region with the Nigerian Navy showed some abandoned well heads owned by the IOCs and NOCs scattered all over the vast river in Rivers, Bayelsa and Delta states.

Industry experts explained that these abandoned oil well heads were supposed to have been permanently sealed immediately after the affected IOCs and NOCs put them out of use. They explained that by abandoning them, these indicted oil firms have unconsciously encouraged oil thieves to swoop on the nation’s oil resources by fixing underground pipes into these abandoned well heads with which they siphon crude to their respective cooking camps, from where they are illegally refined.

One of the tapping points of the crude oil into an illegal refining camp in Bayelsa was allegedly traced to one of the major IOCs, 13 kilometres away from the camp.

According to reports, some cooking camps visited in the three states have dugout pits where stolen crude oil tapped from abandoned well heads flows directly into.

It was also gathered that apart from the challenge of deliberate uncapped well heads by the IOCs and NOCs, another problem dwarfing efforts of the Nigerian  Navy in the fight against crude oil theft in the Niger Delta region is inadequate cooperation from communities where these illegal crude oil cooking take place.

The lack of an adequate storage system for recovered stolen crude oil by the Navy is another challenge being faced by the security agencies in the area, a development that compels them to set the recovered crude oil on fire during deactivation, to prevent oil thieves from accessing it.

Upon enquiry, it was discovered that the NOCs usually did not show up to evacuate the recovered crude oil even when contacted as they consider it not up to the quantity they ought to evacuate.

However, plans are reportedly on the way for the NNPC to partner with the Nigerian Navy by providing a large storage facility where recovered crude oil will be stored.

As Nigerians continue to applaud the efforts of the various security agencies working in conjunction with the private security arrangement in place, oil industry analysts believe there is every reason to sustain the ongoing crackdown on these criminals.

According to analysts, given the fact that revenue from oil sales still forms the bulk of the revenues relied upon to finance budget activities, there is an urgent need to put a permanent measure in place to stop oil theft in the area.

It is believed there is no better way to do this than to ensure all indicted individuals or companies are made to refund proceeds of their illegal activities and made to face prosecution.

It is also necessary to compel the IOCs and the NOCs to, as a matter of priority, effectively disable their abandoned well heads which were found to be giving passages to some of the stolen crude oil.

The affected government representatives, including security agents involved in the ongoing war against oil thieves in the Niger Delta, should realise the war doesn’t end with photo ops in the national dailies. This war should not end at identifying the criminals alone, but all those indicted and arrested should be promptly prosecuted and stripped of their ill-gotten wealth as a deterrent to potential oil thieves.