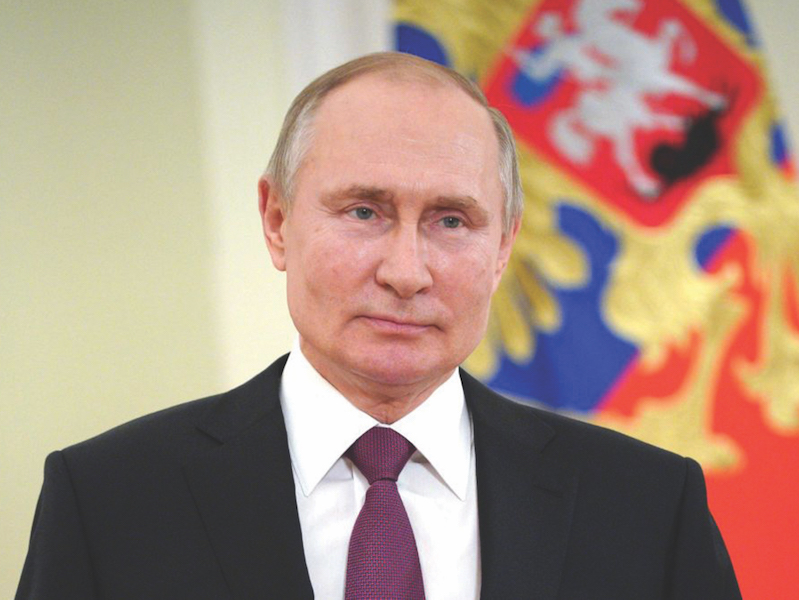 President Vladimir Putin has put the world, especially the West, on edge and notice of a potential nuclear Armageddon as he ordered Russia’s first mobilisation since World War II and backed a plan to annex swathes of Ukraine, warning the West he is not bluffing when he said he would be ready to use nuclear weapons to defend Russia.

US President Joe Biden called Putin’s nuclear threat “reckless disregard for the responsibilities of the non-proliferation regime,” referring to international treaties that prevents nations with nuclear warheads from using them.

Already on tenterhooks is the United Kingdom. UK foreign office minister Gillian Keegan told Sky News that the West should begin to worry about Putin’s threat and see it as more than just a bluff.

China, North Korea, France, India, Israel, Pakistan, Russia, the UK and the US possess nearly 13,080 nuclear weapons. Russia and the US possess roughly 90 per cent of the world’s nuclear weapons, with over 5,500 weapons each. Specifically, according to estimates, Russia has 5,977 nuclear warheads as of 2022, the largest in the world, while its archrival, the United States, has a stockpile of nuclear arsenal amounting to 5,428.

“Clearly, it’s something that we should take very seriously because, you know, we’re not in control – I’m not sure he’s in control either, really. This is obviously an escalation,” Keegan said. “It is chilling … It’s a serious threat, but one that has been made before.”

In the biggest escalation of the Ukraine war since Moscow’s February 24 invasion, Putin explicitly raised the spectre of a nuclear conflict, approved a plan to annex a chunk of Ukraine the size of Hungary, and called up 300,000 reservists.

“If the territorial integrity of our country is threatened, we will, without doubt, use all available means to protect Russia and our people – this is not a bluff,” Putin said in a televised address to the nation.  Citing NATO expansion towards Russia’s borders, Putin said the West was plotting to destroy his country, engaging in “nuclear blackmail” by allegedly discussing the potential use of nuclear weapons against Moscow, and accused the United States, the European Union and Britain of encouraging Ukraine to push military operations into Russia itself.

“In its aggressive anti-Russian policy, the West has crossed every line,” Putin said. “This is not a bluff. And those who try to blackmail us with nuclear weapons should know that the weathervane can turn and point towards them,” he added.

The address, which followed a critical Russian battlefield defeat in northeastern Ukraine, fuelled speculation about the course of the war and showed Putin was unrelenting in his “special military operation” against Ukraine.

Russia’s invasion of Ukraine has led to the death of thousands of people, and several hundred more maimed, including children and women, throwing the world off balance in terms of economic turmoil and global food shortages.

According to reports, Russia’s invasion of Ukraine has also triggered the worst confrontation with the West since the 1962 Cuban missile crisis, when many feared nuclear war imminent.

Putin signed a decree on partially mobilising Russia’s reserves, arguing that Russian soldiers were effectively facing the full force of the “collective West,” which has been supplying Ukraine’s forces with advanced weapons, training and intelligence.

Putin has repeatedly railed against the United States for driving NATO’s eastward expansion, especially its courting of ex-Soviet republics such as Ukraine and Georgia, which Russia regards as part of its sphere of influence, an idea both nations reject. The Russian president said top government officials in several unnamed “leading” NATO countries had spoken of potentially using nuclear weapons against Russia.

Putin also accused the West of risking “nuclear catastrophe” by allowing Ukraine to shell the Zaporizhzhia nuclear power plant under Russian control. There has been counter-accusation by Ukraine. The Russian president supports referendums scheduled to hold in pro-Russia Ukraine territories controlled by Russian troops – the first step to formally annexing a chunk of Ukraine the size of Hungary.

The Donetsk and Luhansk regions, which Putin recognised as independent just before the invasion, and Russian-installed officials in the Kherson and Zaporizhzhia regions have called for referendums.

“We will support the decision on their future, which will be made by the majority of residents in the Donetsk and Luhansk People’s Republics, Zaporizhzhia and Kherson,” Putin said.

Meanwhile, Ukraine and the West have condemned the referendum plan, describing it as illegal. For instance, President Emmanuel Macron called the proposed referendum “a parody.”

“The overall address clearly was more of Putin’s lies. It was a rewriting of history,” Keegan said.

According to the Voice of America, US President Joe Biden called out Putin’s invasion of Ukraine at the United Nations for escalating the war rhetorics and threatening nuclear attacks. In unambiguos terms, Biden condemned Putin’s nuclear threats against the West.

“Let us speak plainly. A permanent member of the United Nations Security Council invaded its neighbor, attempted to erase a sovereign state from the map,” Biden told the annual gathering of the UN General Assembly (UNGA) in New York Wednesday morning. “Russia has shamelessly violated the core tenets of the United Nations Charter, no more important than the clear prohibition against countries taking the territory of their neighbour.”