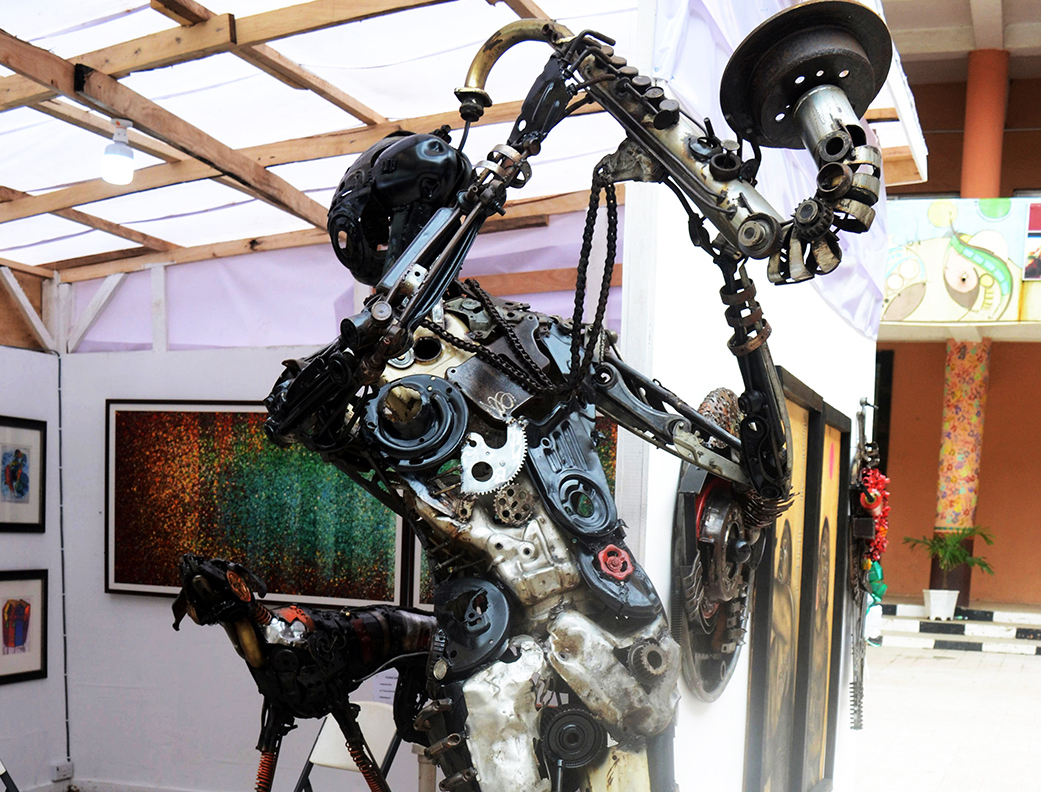 The rain came in torrents, testing to the limits the transparent covering of the exhibition booths. The open doorways, however, could not escape from the wind which splashed water on the precious art works. Curators from the participating galleries scampered to shield the works even as some art lovers sought refuge from the rain. For a while, the Arena of Cyprian Ekwensi Centre for Arts & Culture, venue, of the exhibition, was in apparent chaos.

It was on this soggy note that the second edition of International Art Fair Abuja organised by National Gallery of Art (NGA) in collaboration with the Society of Nigerian Artists (SNA) took off on Tuesday, September 6.

The Amphitheatre Arena, which served as space for the exhibition was maximally utilised by the 12 exhibiting galleries including the NGA and SNA. “Each rectangular booth, stood at 14 ft by 12ft” explained Chris Obadan, a sculptor and staff of NGA.

As you step into the exhibition ground, a huge metallic sculpture at 8ft in height strikes you. It is one of the pieces by the gallery, International Institute for Creativity and Development. The skillfully executed work, shows a musician, blowing away on his saxophone. Titled “Abamida”, the work by Dada Abdebayo (2016) is reminiscent of Nigeria’s music legend, Fela Anikulapo Kuti, fondly called Abami Eda, whose dexterity on the sax is non-parreil. Was this why the artist, deliberately made musician appear as a giant in this piece?

Equally exciting is another sculptural piece from the Orisun Art Gallery stand, titled “Panthers in Motion” by Jimoh Ighodalo (2020). The finely-sculpted woodwork shows two panthers glaring at each other, fangs bared. The tension is palpable, a measure of the skill of the artist in sculpting hard wood to achieve the desired effect. “The artist is asking people to preserve the habitats for wild life,” Femi Coker, Curator of the Gallery explained. Close to it is “Ode Ofe”, oil on canvas (2014) by Osaretin Eghosa, which shows a flutist, festooned with feathers and ornaments playing his instrument with deep concentration. It is a colourful piece…

For the second time, Nike Art Gallery announced its presence in the nation’s capital, Abuja. The stand had paintings and mixed media which reminds one of the iconic works at its Lagos headquarters in Lekki. Kobab House of Art, owned by an expatriate and artist, Kobab Farrukh added an international flavour to the exhibition. Amidst the medley of works here, her acrylic on canvas, “Mama Africa” (2015) stands out. The African and Nigerian influence is quite obvious in the works on display on her stand including “Spreading Colour”, acrylic on canvas (2018) among others.

At the SNA stand, the disorganised and rowdy Oshodi, a sad reminder of the old days of the area that defied decorum before Lagos State turned it into a modern transport hub in the metropolis, stares you in the face. Titled “Old Oshodi” by Yemi Oladipo, oil on canvas (2020), the chaos and disorder are all too visible in this well intricately painted piece.

Close to this is “Illusions”, an acrylic on canvas (2022) executed by SNA President and painter, Muhammad Sulaiman on the stand of Matrix Gallery.  Dripping with blood, the piece amplifies the on-going blood-letting in the country occasioned by banditry, kidnapping and insurgency with just a tiny glimmer of hope tucked near the top left of the work. There are also five scare-inducing art works by SNA Secretary General, Prosper Akeni in what he refers to as the holocaust series. “The series is a major protest on the prevailing violence against mankind,” the artist explained. Even the medium, ink shake and smoke on paper, are reminiscent “of tools of destruction and bacterisation of humanity: fire, bombs, bullets and missiles among others,” Akeni explained. Also, noteworthy here, is the installation by Helen Nzete titled “Fragile”.

Other private galleries that participated are: House 33, Hare and Grouse Art Gallery, Creative Art and Visual Imagery Center and Bureau de Creativity. The Female Artists Association of Nigeria was equally on ground. In all, 165 art works were exhibited which comprised metal sculpting, wood, paintings and mixed media.

The quality of the artworks attests to the professionalism of the galleries in selecting the art works for the exhibition. A colourful brochure complete with background notes on the participating galleries and the art works showcased, was produced to complement the exhibition. Also, inside the brochure, are insightful articles on different aspects of visual arts in Nigeria for the edification of artists and art connoisseurs: Abuja Art Fair: A big Art Market in the Northern Frontier by Dr. Simon Ikpakronyi; The State of Visual Arts today and the Reform for the future by Prof. Funke Ifeta and Thoughts on Establishing a Nigerian Biennale by Prof. Jerry Buhari.

Still, four days into the exhibition when the writer returned, none of the works had been tagged.  It is something that bothers the curator of the exhibition and head of department, curatorial services, NGA, Simon Ikpakronyi. “Tagging has to do with patronage,” he explained. Though he believes Art Fairs are not just for the sale of art works but for the artists to market themselves and leverage on contacts made during the exhibition, he is working on modalities to improve patronage for the next edition. This includes the possibility of changing the venue to a more accessible place and improved publicity among others.  Indeed, the theme for his article for the forthcoming edition hinges on patronage at art exhibitions. “The concept of International Art Fair Abuja is to grow a big art market in the FCT and Abuja for the Nigerian art community,” he explained.  Femi Coker of Orisun Art Gallery, however, does not see poor patronage at the present Fair as a draw back. “A lot of people have come and asked about our art works. I am optimistic on patronage. Very optimistic.”

That should encourage the organisers as they plan for the third edition.