2023: Tinubu Absent as Atiku, Obi, Kwankwaso, Others Sign Peace Accord 16 hours ago

Buhari to Judges: Be Impartial Arbiters in Election Matters 16 hours ago 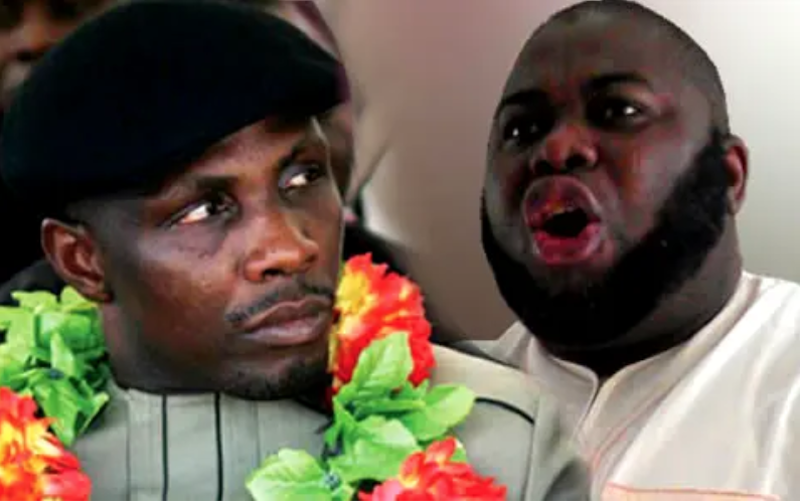 The renewed tension between two ex-warlords in the Niger Delta, Government Ekpemupolo (a.k.a Tompolo) and Mujahid Asari-Dokubo  over a N48 billion pipeline surveillance contract has further reinforced the growing influence of non-state armed actors in the public space and the shrinking power of the federal government to discharge its constitutionally guaranteed obligations effectively, Gboyega Akinsanmi writes

After many years in the doldrums, the founder of the Niger Delta Volunteer Force (NDVF), Mujahid Dokubo-Asari last week hit the airwaves again to express his grievance over the N48  billion pipeline surveillance contract awarded by the federal government. The contract was awarded recently to Global West Vessel Specialist Limited, a private maritime security firm founded by Government Ekpemupolo (a.k.a Tompolo), an erstwhile Commander of the Movement for the Emancipation of the Niger Delta (MEND).

By the terms of the contract, the Tompolo-owned firm will protect all oil pipelines criss-crossing nearly all the states in the Niger Delta. The scope of the contract also covers the entire Kingdom of Kalabari, the ancestral home of Dukobo-Asari, which is largely inhabited by the Ijaw people in Rivers State. At least, as the ex-warlord claimed, the kingdom hosts about a 83-kilometre stretch of the entire pipeline that Global West was engaged to protect.

The award of the contract has stoked protracted disapproval, especially from notable public authorities, civil society organisations and repentant warlords in the Niger Delta, among others. In a viral video last week, Dokubo-Asari threatened to prevent the Tompolo-owned firm from executing the contract within the Kingdom of Kalabari, which he claimed, falls within the land of his birth, as well as his area of influence as a freedom fighter.

Dokubo-Asari therefore raised two fundamental issues about the decade-long relative peace in the Niger Delta, which experts believed, calls for national concerns. He first pointed out the role of the ex-warlords in helping the federal government “to stabilise the Niger Delta from the era of late President Umaru Musa Yar’Adua to date after decades of instability that cut oil production by almost 70 per cent.”

Second, the ex-warlord accused the Minister of State for Petroleum Resources, Chief Timipre Sylva, of playing with relative peace the oil enclave has been enjoying under President Buhari. He cited the role the minister played in the award of the contract in favour of Tompolo’s firm. Specifically, he alleged that the minister obviously influenced the contract for Global West to spite other former warlords from the Niger Delta.

On these grounds, he argued that the federal government utterly erred by awarding the pipeline protection contract to Global West alone.

Like Dokubo-Asari, a group of youths in Akwa Ibom, Ibeno Men-Clue Development Association, also opposed the award of the contract to the ex-warlord’s company. Its Coordinator, Mr Itam Ikotinye, in a communique recently, claimed that the host communities did not need former militants to safeguard oil installations within their territory.

Given the growing opposition to the contract nationwide, tension has again started building up across the Niger Delta with the resolve of some ex-warlords and youth groups to prevent Tompolo’s firm from executing the contract within their areas of influence.

Discerning the imminent relapse of the region’s relative peace, the Igba of Warri Kingdom, Chief Rita Lori-Ogbebor last Monday advised the federal government to revoke the contract with immediate effect.

Ogbebor premised her argument on Section 14(2)(b) of the 1999 Constitution (as amended). Consistent with this provision, Ogbebor argued that it “is the onus of the federal government to manage the affairs of the Niger Delta and not an individual or a company.” This position conforms with the belief of Ondo State Governor, Mr. Rotimi Akeredolu, who argued that the contract “raises fundamental questions on the sincerity of the advisers of the federal government on security issues.”

But why did the federal government award the contract to a security contractor linked to an ex-warlord?

On behalf of the apex government, the Nigerian National Petroleum Company (NNPC) Limited awarded the contract due to the vicious cycle of oil theft and illegal oil refining to which Nigeria lost $3.27 billion worth of oil in 14 months, a development that had plunged both federal and state governments into fiscal and liquidity crisis.

In March 2022, also, Chairman, Heirs Oil & Gas, Mr. Tony Elumelu, put the loss at 95 per cent of daily oil production. At the same time, then Chief Executive, Seplat Energy Plc, Mr. Austin Avuru, corroborated Elumelu’s claim on the magnitude of oil theft in the country. Sharing his field experience, Avuru claimed that at least 80 per cent of crude oil  produced from oil rigs never got to  the terminals due to oil theft.

Also, the government awarded the contract due to two fundamental challenges, which former Commander, Training and Doctrine Command, Nigerian Army, Maj. Gen. Ishola Williams (rtd) claimed, posed existential threat to the federation. The worst of the challenges relates to the worsening insecurity, which according to Global Rights, has cost no fewer than 5,708 lives in the last eight months alone.

The second manifests in the widening deficit that has been dotting the expenditure-revenue exposure of the federal government. As illustrated in the recent economic reports of the Central Bank of Nigeria (CBN), between January and May, the federal government generated about N1.94 trillion, though its aggregate expenditure stood at N4.73 trillion. As a consequence, the apex government spent N2.78 trillion more than its revenue in the first five months of 2022.

In response to these stark socio-economic realities, Group CEO, NNPC Limited, Mallam Mele Kyari justified the pipeline protection contract award to Global West. Kyari revealed that the contract was first and foremost aimed at ensuring end-to-end pipeline surveillance. Also, he argued that such an objective can only be accomplished through the involvement of private entities and community stakeholders in collaboration with security operatives.

But is this the first time the federal government will award such a contract to companies linked to the ex-warlords?

In 2011, for instance, the federal government under President Goodluck Jonathan first came up with this initiative. It subsequently integrated it the Presidential Amnesty Programme (PAP). Its objective then was to further de-escalate insurgencies in the Niger Delta, which according to reports, plummeted oil production by over 700,000 barrels per day when late President Yar’Adua assumed office in 2007.

After Yar’Adua’s death, Jonathan introduced pipeline surveillance contracts as part of programmes designed to deepen the cessation of hostility in the Niger Delta. While the Nigerian Maritime Administration and Safety Agency (NIMASA) directly awarded maritime security surveillance contracts to the companies of the demobilised warlords then, NNPC Limited brokered pipeline protection deals. These decisions had ignited public disapproval, especially among the opposition parties.

In 2012  as shown in diverse reports, the Federal Executive Council (FEC) awarded a $103.4 million contract for the strategic concessioning partnership between the NIMASA and Global West. In the same manner, the FEC brokered $9 million pipeline protection contracts each with Dokubo-Asari; former Commander, Niger Delta Strike Force (NDSF), Farah Dagogo and the Founder of People’s Liberation Force (PLF), Egberi Papa.

Under the contracts, the ex-warlords were saddled with the protection of vulnerable oil pipelines and police the creeks as a strategy to stem oil theft, pipeline vandalism, maritime crimes and armed campaigns.

Given this trend, the Buhari’s administration obviously adopted Jonathan’s policy response to managing highly contentious issues in the Niger Delta. Is the approach justified within the context of the country’s extant laws? As naval strategists argued, the contract evidently lacks legal basis under the 1999 Constitution.

Its signing practically contravenes Section 217 of the 1999 Constitution and Section 2 of the 2004 Nigeria Armed Forces Act, which designates the Nigerian Navy as the sole authority empowered to defend and secure Nigeria’s core values from and at sea. Also, under Section 214 of the Constitution and Section 33(b)(v) of the 1968 Nigeria Police Regulations, 1968, Nigeria Force Marine was established to enforce law and order only within the country’s vast creeks, internal waters and swamps.

With the recent award of the N48 billion pipeline protection contract to Global West, naval strategists observed that the federal government “only succeeded in ceding the statutory obligations of the Nigeria Navy and Force Marine to the non-state armed actors. This decision suggests the waning capacity of the federal government to secure its territory due to what they ascribed to the misplaced priorities of the political leadership.

Besides its nullity legally, the signing of the contract further portrays a bleak future for a federation beset with heinous security challenges – terrorism in the North-east, armed violence in the North-west, rising cases of kidnapping -for-ransom in South-west and South-South, farmers-herdsmen conflict in the North-central and separatist agitation in the South-east. With the rising tension in the Niger Delta, as naval strategists observed, Nigeria unequivocally risks tragic implosion if the ex-warlords return to the creeks again