US Gov’t Commends Nigerian Navy over Reduction in Piracy 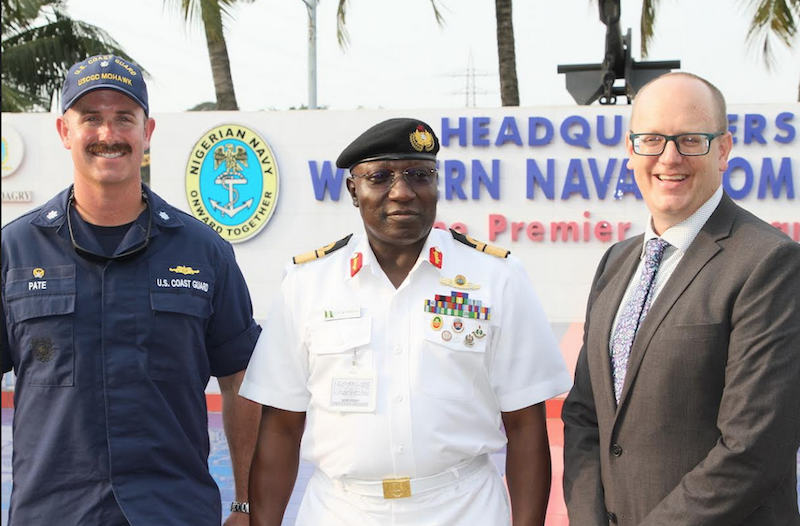 The United States Government has commended the Nigerian Navy for its role in reducing piracy in the Gulf of Guinea (GoG) region.

The United States Consul General in Lagos, HE William Stevens made this commendation when the United States Coast Guard Cutter Mohawk arrived Lagos to strengthen its bilateral relations with its Nigerian counterpart.

On a courtesy call to the Flag Officer Commanding (FOC), Western Naval Command (WNC), Rear Admiral Yakubu Wambai, at the Command’s Headquarters Office in Apapa, Lagos, he said the visit strengthened bilateral ties between the two nations as they continue to fight piracy in both Nigerian waters and GoG.

Consul General Will Stevens welcomed the ship’s arrival, and noted, “the United States is committed to supporting the Nigerian Navy in its efforts to both secure its own territorial waters and those of the greater Gulf of Guinea.

“Cooperation and the ability to operate together in the maritime domain are necessary to enhance Nigeria’s capacity to counter piracy, oil bunkering, illegal fishing, and other sea-based illicit activities.”

Stressing that the Nigerian Navy had increased its capabilities in light of recent efforts that have resulted in zero piracy attempts for several months, he said:  ” I am here accompanying my colleagues from the US Coast Guard – MOHAWK, as we come to partner with Nigerian colleagues in combating piracy here in Nigerian waters and the Gulf of Guinea.

“We have been long-term partners with the Nigerian Navy, and we are so proud of the Navy for the great work that they have done to reduce piracy last year, with no piracy this year, and down by 90 per cent , with their colleagues across the Gulf of Guinea.

“It is an incredible achievement and I think a mark of increasing capacity has been made here.”

In  response, Admiral Wambai appreciated the visiting Consul General and the ship’s company for recognising the navy’s capability and competence.

He said: “There have been indices and we have been working hard to achieve this. The international maritime bureau, in April 2022, delisted Nigeria from the list of pirate states. That means we have not heard any piracy incidents over the last 12 months”

“This is a collaborative efforts which is a deliberate effort but it is a planned work due to the leadership of the Chief of Naval Staff, Vice Admiral Awwal Zubairu Gambo that has put in a task and a timeline and followed up with proper guidelines ensuring that we maintain a close relationships with our foreign partners.

“Going forward, such collaboration will continue and that is why you are seeing the US Coast Guard – MOHAWK, in Nigeria, and we will continue to have this collaborative effort of international partners working together with us to ensure the necessary synergy in combating this scourge as no one country can do that alone”

“You have gone beyond giving us vessels, now you are coming to exercise and trying to raise the bar by exchange of personnel. That means you have accepted us and you have recognised our capability and our competence as seamen, if not you would have liked to be teaching us.”

Speaking further, Admiral Wambai acknowledged the joint efforts of other Gulf of Guinea States and international partners in the fight against piracy, to keep the seas open and safe for international trade to blossom.

“So, we continue to have this series of collaborative efforts of international partners working together with us to ensure that the synergy in combating this scourge; no one country can do it alone, it has to be collaborative,” he added.

During the visit, Mohawk officers  met with Nigerian Navy leadership at the WNC Headquarters in Apapa, as well as hosted ship tours for Nigerian government and military officials.

The United States and Nigeria have a proud maritime partnership of promoting peace, stability, and security in Africa while Nigeria is a participant in exercise Obangame Express, the largest multinational annual maritime security exercise in West Africa, and will host the next iteration in January of 2023.

The waters surrounding the African continent are crucial for Africa’s prosperity and access to global markets. The United States shares a common interest with African partners in ensuring security, safety, and freedom of navigation.