Buhari to Judges: Be Impartial Arbiters in Election Matters 18 hours ago 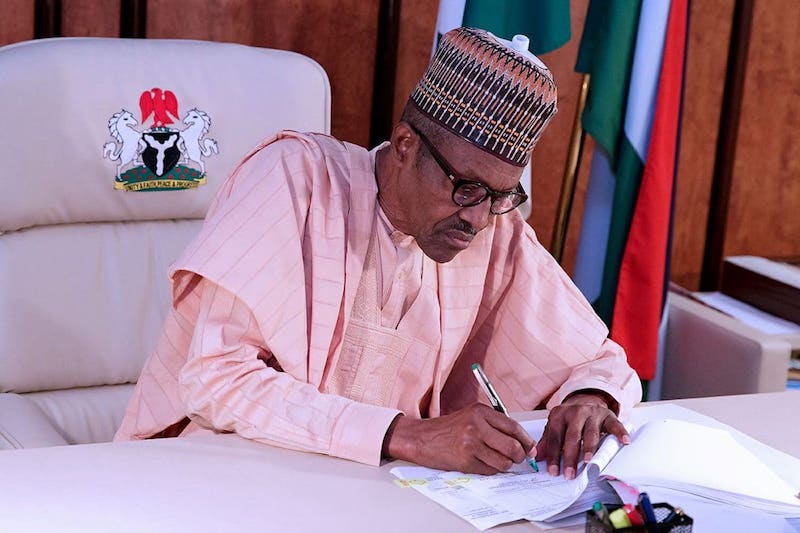 *Says Nduka Obaigbena is the greatest Nigerian he has met

This was just as the Emir of Kano, Alhaji Aminu Ado Bayero, yesterday paid condolence visit to the Obi of Owa, HRM Obi (Dr.) Emmanuel Efeizomor and the family of Prince Nduka Obaigbena over the demise of their mother ahead of the commencement of the funeral rites.

The two condolence letters which were personally signed by the president and his wife came as the final burial rites of the 88-year community leader commence in  Owa Kingdom, Delta State, today.
While expressing his sympathies to the Obaigbena family, the president described the late special adviser to three governors in Delta state, as a treasured daughter of the land.

He noted that the demise of the mother of the THISDAY’s publisher would create huge vacuum, but urged those she left behind to take comfort in the fact that she lived her life caring for the disadvantaged in the society.
“Let me convey my heartfelt sympathies to the Royal Palace of the Obi of Owa Kingdom in Delta State on the passing of a most treasured daughter, Princess Margaret Obaigbena, Nee Usifoh, at the age of 88.

“I commiserate with you, members of your family and the entire people of Delta State on the loss of your mother, Princess Margaret, a pillar of strength for the family, an accomplished mother and revered community leader, whose absence will be felt far beyond her immediate environment.
“The demise of Princess will no doubt create a great vacuum in the community. I therefore urge the family to take solace in the understanding that she lived her passion by caring for the distressed and disadvantaged,” the president wrote.

He saluted what he described as the late Mama Obaigbena’s steadfast disposition to servicing mankind, beginning early in life and reaching the peak of the nursing profession as well as channeling her energy and resources to the realisation of lofty convictions.

“I use this opportunity to condole with the government and people of Edo and Delta States on the loss of the illustrious citizen who contributed immensely to the development of the two states. Her role as special adviser to three governors of Delta State will remain indelible in the annals of the state,” Buhari added.

In the same vein, the wife of the president, while condoling with the Owa prince, asked God to grant the family the fortitude to bear the irreparable loss.
“I write on behalf of the first family, our friends and associates to express my heartfelt sympathy over the demise of your dear mother, Princess Margaret Obaigbena.

“In this period of grief, I and the people of Nigeria mourn with you and the royal family of Owa Kingdom. May the good God grant you and the entire family the fortitude to bear this irreparable loss and the wisdom to oversee the affairs of the entire family. Please, accept my sincere condolences and best wishes,” she wrote.

Meanwhile, the funeral ceremony of the matriarch of the Obaigbena family, who passed in June would commence today in Owa-Oyibu, Delta State.
The octogenarian Dame of Anglican Church, who died on June 16, 2022 was a former chief nursing officer in the defunct Bendel State.
Earlier, a commemorative birthday and day of tributes was held on August 16 at Owa-Oyibu, for the accomplished mother.

A programme released by the royal family indicated that on August 19 (today), a lying in state ceremony would hold from 11:00am while service of songs holds between 4:00pm – 9:00pm at Obaigbena Family Compound, Delta State while a Christian wake will hold on the same day from 9:00pm.

In the meantime, the Emir of Kano has paid a condolence call to the Obi of Owa Kingdom to commiserate with the Obaigbena family and the Owa royal household on the death of Princess Obaigbena. He stated that the Publisher of THISDAY, Nduka Obaigbena is the greatest Nigerian he has met.
Welcoming the Emir of Kano and his entourage in his palace at Owa-Oyibu in Ika North-East Local Government Area of Delta State, Obi Efeizomor II expressed delight at receiving the highly regarded monarch having traveled with his entourage all the way from Kano State.

He noted that, “Owa Kingdom has, indeed, lost an illustrious mother, a woman of peace who all through her life had been an epitome of grace and an ambassador of development.”
The Arewa people from Northern Nigeria have lived peacefully with their hosts in Owa Kingdom for over 200 years, Efeizomor pointed out.
The Owa monarch said, “We have good and cordial relationship between the Arewa people (Northern Nigerians) and today they speak Owa dialect fluently as much as I do.

“A friend in need is a friend indeed; there is no difference between the Northern (Nigeria) people and Owa people of Delta State. We thank you for honouring us, coming to Owa is a great testimony, we will not call it moment of grief because we lost a member of our family. Her passing away has made possible the first Emir of Kano to visit Owa land. This is a history we will never forget.

“We like your people, we appreciate your people; we know a bit of your history, the lasting relationship between our people and Kano people made us to crown our former head of state, General Murtala Muhammed as a Chief in Owa kingdom, after the civil war in 1967.”
While assuring of continued support for the Arewa community, Obi Efeizomor II recalled that during the Nigerian Civil War, there was no gun shot and no life was lost between Abudu (Edo State) and Asaba and Owa, adding that the people that travelled to Kano “returned home more prosperous and good stories to tell”.
Responding, the Emir of Kano thanked Obi Efeizomor for hosting him and honouring his entourage, saying he never doubted that Owa would be another home to him.

The Kano monarch said, “When I was leaving home, I told my people that I am leaving Kano State to come to Kano city and I believe when I go back my people will confirm that, indeed I traveled to a place called home.
“I am really delighted to be here, I didn’t come to make a speech but I came to pay homage and condole with my brother. My brother’s mother, Princess Margaret is an icon of hope, a mother to all who has left a legacy that cannot be forgotten.

“My visit to Owa will cement the relationship between the North and Owa Kingdom. Indeed, it is a loss not only to you and my brother, Nduka; it is a loss for all of us, and we will continue to pray for her to rest in peace.

“In terms of tradition, I have come to greet my brother from another end, I have come to pay homage to someone who is like a father to me. Being a father to my good brother and friend, Nduka, means he (the Obi) is undoubtedly my father in both ends of life. I feel good, I feel great meeting someone who is great.
“I am happy to tap from the experience of Obi Efeizomor and I look forward to seeing more of him and to grab the experience he has gathered over 80 years plus. If we have traditional rulers like him all over the country, I am sure, we will always be guided, succeed and we will always reach the the stage of helping anybody in this country.

“People have said that there is no peace and harmony between us, and I beg to disagree with them because we are one people and our similarities are more than our differences, and I believe this will be the beginning.
“This is just a brief visit to honour my father, my brother and I pray to have an opportunity to come back here for another occasion.”
While thanking the Owa monarch, for accommodating his people without a single complaint, the Emir of Kano called on the people of Northern Community living in Owa kingdom to continue to live in peace, respecting the tradition and culture of Owa Kingdom.