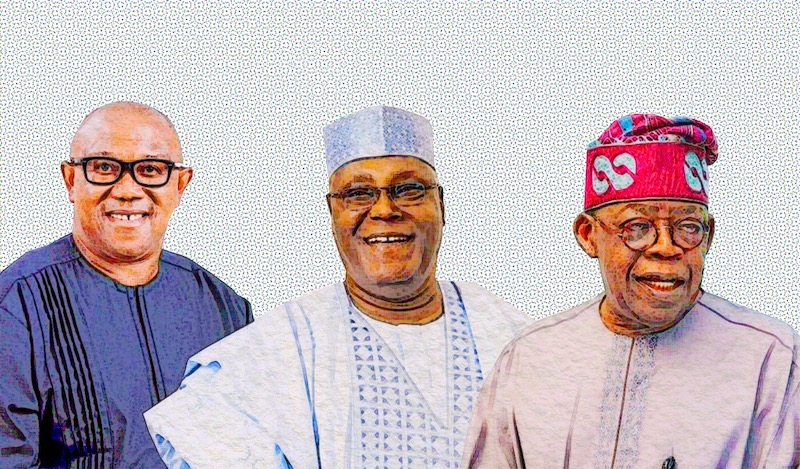 Alex Enumah writes on the plethora of suits filed against the presidential candidates of the three leading political parties at the Federal High Court in Abuja, which have the potential to truncate their ambitions

The headline was unequivocal and unambiguous: “Court grants order of substituted service on Tinubu.”

In the suit, the plaintiffs asked the court to rule that Tinubu is ineligible to run for president in the 2023 presidential election as the party’s candidate because he allegedly submitted false information to the Independent National Electoral Commission (INEC).

In a 33-paragraph affidavit in support of the suit deposed to by Ibiang, the four APC chieftains averred that Tinubu falsely swore to an affidavit in 1999 in which he claimed to have attended St Paul Aroloya Children Home School, Ibadan, from 1958 to 1964, and Government College, Ibadan, 1965 to 1968 and presented the same to INEC.

According to the plaintiffs, the deposition is untrue. They claimed that in his INEC form for the 2023 elections, Tinubu refused to include any information about his primary and secondary schools in order to hide the false information he had provided to INEC.

They wondered whether, having regard to the decision of the Supreme Court in the case Modibbo Vs Usman (2020) 3 NWLR(PT.1712) 470 and the provision of Section 137(1)(j), the third defendant has not presented a forged certificate to INEC.

Ruling on an ex parte application, Justice Mohammed granted an order for substituted service on Tinubu after the plaintiffs’ counsel, Goddy Uche, told the court that substituted service has become necessary because all attempts to serve the presidential candidate proved abortive.

The court also ordered that court processes should be served on the national secretariat of the APC and that such service shall be deemed as having been properly served on Tinubu.

Before that, in another suit, Justice Inyang Ekwo of the same court in Abuja had refused to throw out a suit seeking to compel the Inspector-General of Police (IG), Usman Baba, to commence a perjury trial against Tinubu.

Ruling on an ex parte application filed by a Civil Society Organisation (CSO), Incorporated Trustees of Centre for Reform and Public Advocacy, to apply for an order of mandamus to compel the IG to prefer charges against Tinubu for having allegedly lied on oath, Justice Ekwo granted permission and said the suit has merit.

In a suit marked FHC/ABJ/CS/1058/2022 and filed on July 4, the CSO claimed that Tinubu lied under oath when he tendered his credentials to the INEC in 1999 when he contested for the Lagos State governorship seat.

The group said the IG is empowered by the Constitution and Police Act to probe criminal allegations levelled against anyone. It added that according to Section 32(1) of the Police Act, any suspect is meant to be arrested and tried in court. The group said it was compelled to file the suit because two letters it wrote to the IG where it called for the prosecution of Tinubu were allegedly ignored.

In another suit equally seeking to bar Tinubu from the 2023 presidential election over allegations bordering on forgery, Justice Obiora Egwuatu recently ordered substituted service on the candidate.

The order was issued after the judge heard an ex parte motion brought by Action Alliance (AA) to serve the suit on Tinubu, who is the third defendant through substituted means.

The plaintiff, in the writ of summons, predicated its request on the claim that both the APC and Tinubu were not qualified to participate in the 2023 presidential election, following alleged forgery committed by Tinubu in 1999. The suit filed on behalf of the plaintiff by its lawyer, Mr Upkai Ukairo, claimed that Tinubu forged his University of Chicago certificate he submitted in 1999, in aid of his qualification for the 1999 governorship election in Lagos State, which was won by Tinubu.

However, owing to the difficulty in serving the suit on the third defendant, the plaintiff on June 29, brought an ex parte application praying the court for an order to serve Tinubu through substituted service.

Delivering his ruling Justice Egwuatu granted the request to publish the writ of summons and other processes including the order of substituted service in THISDAY or The Nation Newspapers.

The PDP is also asking the court to declare that Tinubu and Obi be disqualified unless they contest alongside their previous running mates – Kabiru Masari and Doyin Okupe, respectively.

Tinubu had nominated Masari as a surrogate running mate or placeholder in order to beat the June 17 INEC deadline. Obi had also nominated his campaign manager, Okupe, as an interim running mate. However, INEC gave a grace period of about one month to substitute their names.

After weeks of consultations, Tinubu and Obi nominated Shettima and Baba-Ahmed respectively while Masari and Okupe resigned.

However, the PDP asked the court to determine if, by the combined interpretation of Section 142(1) of the Constitution, Section 29(1), 31 and 33 of the Electoral Act 2022, and INEC’s timetable, Tinubu and Obi are bound by the submission of Masari and Okupe, respectively as their running mates.

The party also asked the court to determine if by the combined interpretation of Section 142(1) of the Constitution and Sections 29(1), 31, and 33 of the Electoral Act 2022, INEC can validly accept any change or substitution of the fourth (Masari) and seventh (Okupe) defendants as running mates of the third (APC) and sixth (Labour Party) defendants.

In yet another suit filed at the Federal High Court in Abuja, former Minister of State for Education, Emeka Nwajiuba, is seeking to disqualify Tinubu and the presidential candidate of PDP, Atiku Abubakar.

In the suit jointly filed along with a group, Incorporated Trustees of Rights for All International, Nwajiuba alleged that the primary elections of the APC and PDP that produced the presidential candidates were marred by vote-buying.

Nwajiuba was the first aspirant to procure the N100 million nomination and expression of interest forms of the APC. However, he refused to show up at the venue of the June 8 convention where the primary election was held. He polled only one vote.

He subsequently claimed that he stayed away from the convention because the APC did not zone the ticket to the South-east and he did “not want to be part of the dollar and Naira bazaar.”

In his suit, Nwajiuba attached video evidence of former Minister of Transportation, Rotimi Amaechi, claiming that the delegates were bribed to vote.

The latest of the suit to disqualify Tinubu from contesting the 2023 elections was filed last week when an Abuja-based lawyer, Mike Enahoro-Ebah, sued the INEC over its refusal to provide the certified true copies (CTCs) of documents relating to Tinubu’s presidential nomination. The lawyer is also seeking an order asking INEC to release Tinubu’s nomination forms submitted when he contested the Lagos governorship election in 1999 and 2003 respectively.

In a suit marked FHC/ABJ/CS/1337/2022, Enahoro-Ebah is seeking an order granting him leave to apply for judicial review of an order of mandamus directing or compelling INEC to furnish him with the CTCs of the “nomination forms for governor and affidavits in support of personal particulars and all other documents attached thereto, submitted to the respondent by and on behalf of Asiwaju Bola Ahmed Tinubu, for the 1999 and 2003 Governorship Elections in Lagos State.”

Additionally, the applicant is requesting that the court orders INEC to give him the CTCs of the “Nomination Forms EC13A, EC 9, affidavits and any other papers filed to the respondent (INEC) by and on behalf of Bola Tinubu, for the 2023 presidential election in Nigeria.”

The plaintiff said the request for Tinubu’s credentials was based on the argument that since INEC is holding them, they have become public records and he is entitled to access them under section 29(4) of the Electoral Act, 2022 and section 1 (1) of the Freedom of Information Act, 2011.

Also five months after Justice Inyang Ekwo struck out a suit challenging the Nigerian citizenship of Atiku, a fresh suit last month emerged before the court seeking his disqualification immediately after he was announced the presidential candidate of PDP.

In the new suit filed by a lawyer, Mr. Johnmary Jideobi, it was argued that Atiku is not constitutionally qualified to participate in the presidential contest.

Jideobi sought seven principal reliefs against Atiku, PDP and INEC who were cited as first, second and third defendants in the matter; and the Attorney-General of the Federation was also joined as the fourth defendant.

As the presidential candidates of the three leading political parties are going through their consultations, mobilisation and campaigns, they are  also worried about the suits, which can Mar their ambitions.

The most recent of the suits was the one filed a chieftain of PDP, Newgent Ekamo last week at the Federal High Court in Abuja against the presidential candidate of PDP, Atiku and the Sokoto State Governor, Aminu Tambuwal, over the conduct of the presidential primary of the party that was held was in Abuja on May 28 and May 29, 2022.

During the primary, when aspirants were asked to address delegates, Tambuwal had asked them to vote for him only to return moments later to say that he was withdrawing from the race and delegates to vote for Atiku.

At the primary, Atiku polled 371 votes while Rivers State Governor, Nyesom Wike and Senator Bukola Saraki garnered 237 and 70 votes respectively. After the convention, the National Chairman of the PDP, Iyorchia Ayu, in a viral video, described Tambuwal as the “hero of the convention.”

In the suit marked FHC/ABJ/CS/782/2022, Ekamon is asking the court to determine eight issues including whether the purported transfer of Tambuwal’s votes to Atiku by the PDP was illegal and void.

The plaintiff asked the court to determine if Tambuwal did not lose his claim to votes the moment he stepped down for Atiku? He is equally seeking a declaration that the PDP acted negligently and in bad faith by assigning the Sokoto governor’s votes to Atiku at the primary.