Buhari Back in Abuja after Attending UNGA77 Summit in New York 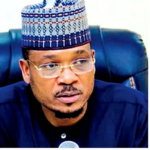 Oba Fasiku posited that while not opposed to the idea of a new LCDA to bolster development and participatory democracy, he, however, contended that such shouldn’t be done without consultation with relevant leaders.

In a petition addressed to Fayemi and dated August 5, 2022, the town faulted the proposed Oreniwa acronym given to the LCDA, but suggested names like Ikole South-west or Ikole North-west.

The letter reads: “There is, therefore, no doubt that the creation of local government areas would normally usher in inestimable infrastructural, be it socially, economically and politically in any part of the country, but it should never be done to create unprecedented upheaval and avoidable acrimony among the hitherto peacefully coexisting communities.

“However, our present position is painstakingly premised on the emphatic erroneous naming of  a  LCDA  for the seven communities currently existing on the land of lkole Ekiti as “Oreniwa” LCDA.

“To worsen the symbolic situational scenario, we have our notable basic citadel of learning such as Ansa-ur-Deen High School founded in 1959, St. Mary’s Girls Secondary School established in 1962, Holy Apostolic Secondary School and L. A. West Primary School will all be located in Oreniwa.

“Your Excellency, Sir, the name “Oreniwa LCDA” would rather breed contempt, hatred, distrust, astronomical acrimonies and confusion among the people, who had intermarried for several decades, living as brothers and sisters in the past.”

The community unequivocally reiterated that that any naming that will not reflect the suffix Ikole Ekiti in the creation of autonomous LCDA, would be seen as a provocation and attempt to stoke the embers of war against Ikole people.

“We hereby suggest that such LCDA could be named “Ikole South-west LCDA or Ikole North-west. However, our present position should never be seen as opposition to your administration or given any political misrepresentation or Interpretation.”

Also, the Regent of Iyemero Ekiti in Ikole Local Government, Princess Adekemi Ajana, has dissociated the people of the community from the plan to be part of the proposed Ayede Local council Development Area.

In a statement on Friday, the regent said that the town under the Ajoni Local Council Development Area would never discontinue its over 500 years of historical, political, cultural and socio-economic relationship with communities at the Ekamefa area.

Ajana said that the community would resist any attempt to coerce Iyemero Ekiti to be part of the proposed Ayede LCDA.