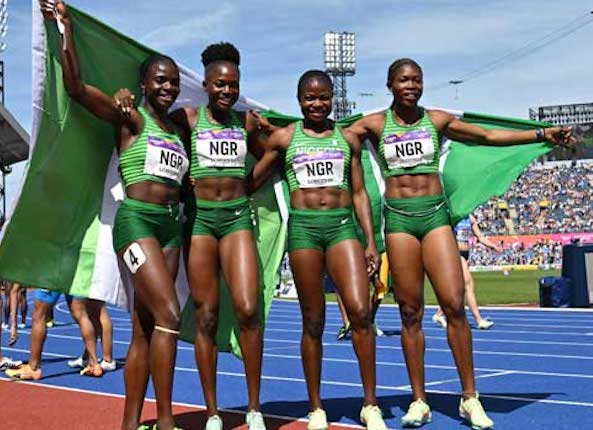 *Says feat parting gift for him as president

Deji Elumoye in Abuja and James Sowole in Abeokuta

President Muhammadu Buhari has hailed Team Nigeria and the coaching crew for making the country  proud by winning 35 medals at the 22nd edition of the Commonwealth Games in Birmingham.

As the curtain draws on the Games today, the President, in a statement issued yesterday by his Media Adviser, Femi Adesina, celebrated the athletes that represented Nigeria gloriously in the competition.

He joined millions of other sports loving Nigerians to watch some of the colourful and spectacular moments in the 11-day competition, which had no fewer than 5,000 athletes representing 72 nations and territories, competing in 280 medal events.

Saluting the memorable display of Team Nigeria athletes, the president commended the 94 worthy ambassadors that proudly flew the Nigerian flag in nine sporting events, and for those exciting moments when the medalists brought smiles to our faces by breaking world, national and games records, as well as achieving personal bests in their career.

With 35 medals, including 12 gold, 9 silver and 14 bronze harvested already on the late evening of the 10th day of the Games, and more medals likely for the country on the last day, the president thanked the shining stars of Nigeria for competing among the best in the world and displaying the God-given attributes of the real Nigerian- never give up, strive to the end.

According to the president, it was noteworthy that majority of the medals so far, including 12 gold for the country, “were championed by our talented young women and girls, including multi medalist Tobi Amusan (100m Women’s Hurdle and 4x100m Relay), Favour Ofili, Rosemary Chukwuma, Grace Nwokocha (4x100m Relay); Miesinnei Mercy Genesis (50 kg), Blessing Oborududu (57 kg) and Odunayo Adekuoroye (57kg) in Women’s Freestyle wrestling; as well as Adijat Adenike Olarinoye (55kg) and Rafiatu Folashade Lawal (59kg) in Women’s weightlifting.

According to him: ‘‘We are proud of these achievements and the memories will linger with the nation forever and for me this is a special moment and a fitting parting gift, being my last Commonwealth Games as Head of State”.

The president also lauded the coaching crew and team officials for the passion towards the development of sports in the country, assuring them that history will remember them for all their contributions in making our athletes shine in the international arena.

“Our golden girl has done it, again. This is a testament to the fact that she is consistent, reliable and deserved the World record, indeed. This is a moment of joy for us all in Ogun State and Nigeria and we are pleased at her streak of successes,” Abiodun was quoted to have said in a statement issued by his Chief Press Secretary, Kunle Somorin

The world champion had on Sunday successfully defended her title at the Alexander Stadium in the women’s 100 metres hurdles final by running a Games record of 12.30sec thus defending her Commonwealth title and setting another record in the process on Sunday.
According to the governor, this made her “the first World Champion to win Gold in the event and the first Nigerian athlete ever – dead or alive – to be crowned champion at all levels of athletics in the same year.”

Congratulating the Ogun State born athlete, the governor described her feat as heroic, saying this was following and improving on the records of her other Ogun stars like Modupe Oshikoya, Falilat, Ogunkoya-Osheku and other compatriots.

Abiodun, who said the sprinter made Ogun, Nigeria and indeed Africa proud at the Games, lauded her spirit of excellence on the tracks.
The governor noted that though Ogun had been known for being the home of illustrious personalities in every human endeavour, the achievements recorded by Amusan further put the state on a global pedestal.

He said “Amusan is a compatriot with prodigious talents reflecting the standard of excellence that our state is noted for. Our state is reputed for exemplary courage, consistency, integrity, and good sportsmanship. Tobi has exhibited these on the world stage, by proving again and again that that success is achievable with hard work and determination.”

While urging the world champion to savour her victory at the Commonwealth Games, Abiodun, implored her not to rest on her oars and continue to make Ogun proud
“It is with joy that I received the news of Tobi Amusan’s triumph at the Commonwealth Games in the United Kingdom. This is indeed another great feat recorded by one of our finest exports in Ogun.

“With this latest feat, it has now become clear that Amusan’s gold medal at the World Athletics Championship held in Eugene, Oregon, USA, was not a fluke. She has shown to the world she is consistent and not a flash in the pan.

“On behalf of the government and people of Ogun, I say big congratulations to one of our finest in the field of sports. Oluwatobiloba Amusan has once again made us proud as a people. In Ogun, we shall continue to celebrate our icons and stars, while we shall also continue to encourage the budding talents across Ogun,” Abiodun added.