Diri: PDP Will Emerge Stronger, Victorious Despite Crisis 54 mins ago 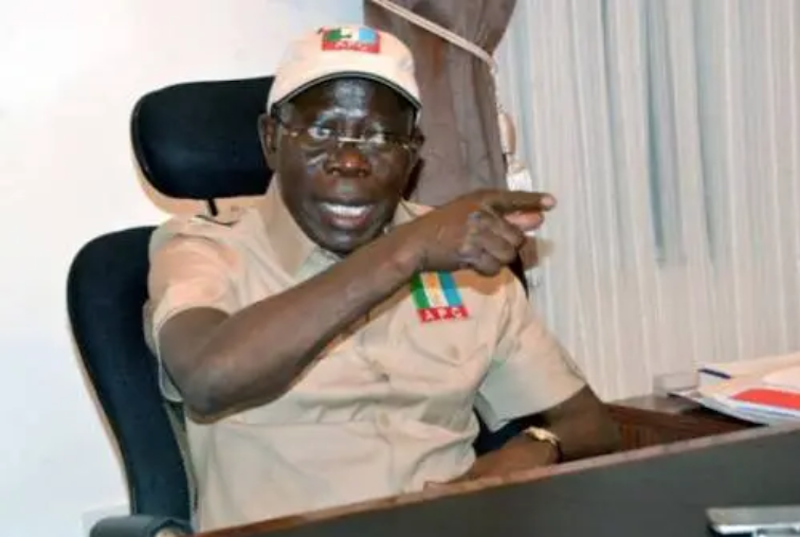 *Party’s NEC to meet on Thursday over membership of council

The Peoples Democratic Party (PDP) and the Labour Party (LP) have condemned the attempt by a former National Chairman of the All Progressives Congress (APC), Mr Adams Oshiomhole, to exonerate the presidential candidate of the ruling party, Senator Bola Ahmed Tinubu from any shortcomings of the President Muhammadu Buhari-led administration.

The two opposition parties also asked the former governors of Edo and Lagos states to apologise for misleading Nigerians in 2015 and 2019.
This is coming as the face-off between the presidential candidate of the PDP, Atiku Abubakar and the Rivers State Governor, Nyesom Wike, has continued to delay the constitution of the party’s presidential campaign council.

The leadership of the main opposition has however summoned a meeting of the National Executive Committee (NEC) of the party on Thursday to decide and approve the headship and members of the party’s presidential campaign council.

Oshiomhole had on Wednesday said on ARISE NEWS Channel that Tinubu cannot take any credit or blame for Buhari’s performance, stressing that the former Lagos State governor never participated in Buhari’s administration.
“You can’t say someone who never in any way participated in government should be credited with the outcome of government policies or be blamed either way,” he said.

“I think in apportioning blame or crediting people, you look at their role. It is a fact that Asiwaju by himself said, yes, he co-founded the APC. I was a co-founding governor of the APC along with Fashola and other governors but he never participated in governance, he never held any position in government, and he didn’t carry out a contract on behalf of the government so how can you credit him either way? This is just being fair,”  Oshiomhole reportedly said.

But in a swift reaction, the National Chairman of LP,  Mr Julius Abure, told THISDAY at the weekend that there was no way Tinubu can shy away from taking responsibility for the failure or success of the APC-led administration, which he helped to install in 2015 and 2019.

“Tinubu and Oshiomhole should by now be burying their heads in shame and apologise to Nigerians for misleading them.
“Nigerians have generally concluded that the APC-led federal government has failed. If Tinubu as the leader of APC cannot be blamed, who else do we blame? You see the problem with some of our leaders is that they shy away from their responsibilities and pass the buck and that is why Nigeria is in trouble.

“Leadership is about people owning up to their failure. We expect Tinubu to also own up to his failure in the performance of the APC-led government since he is a leader of the party. As far as we are concerned, the APC government is the worst government that we have ever had since 1999.
“Nigerian people have even concluded that PDP and APC have failed the country. I mean all the promises that were made by Tinubu during the campaigns in 2015 and 2019 on behalf of Buhari, none has been fulfilled.

Abure added that Oshiomhole had all the opportunity to help advise the government when he was the National Chairman of APC.
Also reacting to Oshiomhole’s comments, the Director of Peter Obi Presidential Campaign, Dr Doyin Okupe, told THISDAY that it would be ridiculous to separate President Buhari from Tinubu when the former Lagos State governor is the national leader of the party that produced Buhari as its presidential candidate.
“If Buhari performed well in the governance of Nigeria, will Oshiomhole and Tinubu not latch on to the performance? It is their liability. APC and Oshiomhole should accept him. It is too early in the day to deny Buhari.

“The best way to go on this, instead of denial is to apologise to Nigerians for the untold hardship Buhari and the APC have brought to Nigerians. After the apology for the woeful performance, then, they should come up with the manifesto to clean up their mess,” Okupe explained.
“It is great disingenuous, fallacious and unacceptable to say that Nigerians should not judge Tinubu from the prism of Buhari. To do otherwise is to continue with the falsehood that APC represents,” Okupe added.

On his part, the National Publicity Secretary of PDP, Debo Ologunagba, also told THISDAY that the former Edo State governor should avoid living in self-deceit and denial as it would be ridiculous for Tinubu to deny Buhari.

“The comment by Oshiomhole is a direct admission that President Buhari and the APC are a failure. Tinubu told the entire world that he discovered Muhammadu Buhari, Babatunde Fashola, Vice President Yemi Osinbajo, and Akinwunmi Ambode. Why deny Buhari now? He told us that he went to Daura to beg Buhari to come out. Why deny him? Buhari is the product of Tinubu and APC. So, they cannot deny him now,” he said.

He continued: “It points to a fact also that the APC can never accept that it has failed Nigerians over the sufferings it brought upon the nation. The party APC is never a political party. It is a contraption assembled  to blackmail PDP out of office
“It is a party built on falsehood and denials. How can Oshiomhole say that Nigerians should not blame him for the failure of Buhari? He is the national leader of APC and Buhari is the president produced by the APC, it is their product,” he added.

Meanwhile, the face-off between the presidential candidate of the PDP, Atiku and the Rivers State Governor, Wike has continued to delay the constitution of the party’s presidential campaign council.
This development prompted the Board of Trustees (BoT) of the party to intervene to hasten the reconciliation between Atiku and Wike. Both leaders were expected to use the weekend to meet members of their campaign team to select those that would be part of the larger reconciliatory meeting.
Atiku and Wike met on Thursday as part of the peace plans. Despite the dispute, Wike’s camp has ruled out defection.

It was gathered that the delay is to avoid any embarrassment to the party should they appoint members who are loyal to Wike and they reject the offer.
PDP had witnessed similar embarrassment when the National Campaign Council for Ekiti State was constituted.
A party source told THISDAY that the party wants Wike to play an important role in the campaign.

In a related development, the leadership of the PDP has summoned a meeting of the NEC on Thursday to decide and approve the headship and members of the presidential campaign council.

It was gathered that the NEC will also decide who will head the campaign council as the earlier plan for Oyo State governor, Mr Seyi Makinde to occupy the position has been dropped because he is seeking reelection next year and therefore may not concentrate on the presidential campaign.
Wike’s camp is said to have also kicked against the choice of Governor Aminu Waziri Tambawal as the proposed head of the campaign because of the role he played by stepping down for Atiku during the presidential convention.

At the last meeting between Atiku and Wike, it was gathered that the Rivers State governor rejected the choice of Tambuwal.
It was learnt that the PDP governors favour having a former Senate President, Senator Bukola Saraki as the head of the party’s presidential campaign council.
“These are some of the issues that the Thursday NEC meeting will decide,” a member of the party’s NEC told THISDAY.