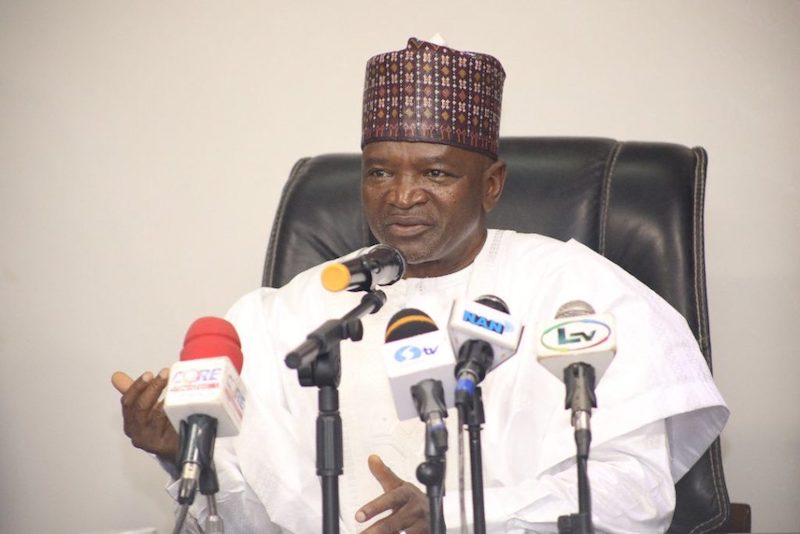 The federal government has disclosed that acts of terrorism in the northern parts of the country have not significantly affected agricultural production.

Minister of Agriculture and Rural Development, Mohammed Abubakar, who made this known yesterday at a news briefing at the State House, Abuja, also said about 3.6 million indirect jobs had been created from $2.4 billion worth of externally funded projects being implemented by the present administration.

Answering a question on reported inability of farmers in the northern part of the country to access their farms, Abubakar said though the federal government was concerned about the development, it had not significantly hampered food production.

The minister stated, “About farmers not being able to access their farms in the North-east, North-west, and North-central, yes, it’s a concern for the government. However, if you notice, our production still has not dropped to any significant level and it’s one of the reasons why we have this arrangement for the agro-rangers to provide some measure of security to be able to access the farms.

“Truly, if you cannot completely access farms all over, you will expect a drop in the production, but right now, we are doing everything possible to make sure we maintain through that security provision and other things that we may not necessarily mention, but you can see food still being produced for the most part.”

On the gains being derived from internationally funded projects, Abubakar said $538 million was approved for special agricultural processing zones to support inclusive and sustainable agricultural development in Nigeria.

According to him, another project worth $575 million is being implemented to improve rural access and agricultural marketing in participating states while strengthening the financing institutional base for effective development, maintenance and management of rural roads network.

The minister noted that government was also implementing the Value Chain Development Programme Additional Financing (VCDP-AF) 2020- 2024 to enhance, on a sustainable basis, incomes and food security of poor rural households engaged in the production, processing and marketing of rice and cassava.

He revealed that the project was currently being implemented in nine states, including Niger, Benue, Ogun, Ebonyi, Taraba and Anambra, Nasarawa, Kogi and Enugu “to scale up the achievement recorded in the original VCDP states.”

Abubakar said Agro-Climatic Resilience in Semi-Arid Landscapes Project (ACReSAL, a $700 million project, was being implemented by three ministries, namely, Environment, Agriculture, and Water Resources, with the 19 northern states and the Federal Capital Territory (FCT) being the beneficiaries.

“The project objective is to mitigate and build the resilience of Nigerian farmers to climate change. The project duration is six years -2022 to 2028. Over One million degraded land will be restored within the six years project cycle,” he stated.

The World Bank/Federal Government of Nigeria Livestock Productivity and Resilience Support Project (L-PRES) is being implemented at the cost of $500 million.

The minister explained that it was an initiative, which adopted a Community Driven Development (CDD) approach targeted at promoting smallholder resilience and commercialisation by facilitating linkages and private sector investment in selected value-chains in the livestock sub-sector.

On the soaring food prices, despite these spirited interventions of government, Abubakar said they were not peculiar challenges to Nigeria; rather it was a reflection of the global economic value chain system.

According to the minister, Nigeria being part of the international community, is exploring ways to manage the situation to suit its own peculiarities as a nation.

He said, “We released about 70,000MT(2,333) trucks of Assorted Food Commodities (AFC) approved by Mr. President to cushion the effect of COVID-19 pandemic, in 2020 to the vulnerable populace in the 36 states and FCT.

“This was followed by the release of 5,000MT of maize to Poultry Association of Nigeria (PAN) to stabilise the hike in price of maize in the open market and to ensure that PAN members remain in business, in 2020. Then there was also emergency release of 1,480MT of assorted food commodities to support IDPs in Kaduna and Katsina states in 2020.

“Currently, releasing 40,000MT of assorted food commodities approved by Mr. President to the vulnerable populace, IDPs through Federal Ministry of Humanitarian Affairs, Disaster Management and Social Development, religious bodies and Poultry Association of Nigeria (PAN) to cushion the effect of high price of food commodities, currently, the National Food Stock balance is 60,000MT of Assorted Food Commodities after the releases”.

Commenting on the effect of the conflict between Russia and Ukraine, the minister noted that even though COVID-19, and insecurity in some parts of the country posed threats to the agricultural sector, the short-term mitigation measures and medium-term plans of the government were yielding the desired results. He explained that FMARD was adopting a multi-stakeholder approach in designing and implementing its mandate; with enhanced private sector involvement in agriculture and sustained efforts to reduce drudgery and enhance value addition. Nigeria can deepen the production of its basic food requirements and create more jobs in the process.

“The success of any agricultural policy and interventions, however, rests on synergy among federal MDAs, and between federal, states and Local governments.

“Nigeria is not immune from the current situation in Europe. It is my hope that the recent agreement between UN, Turkey Russia, and Ukraine on the export of grains through the Black Sea Ports of Ukraine will lead to a drop in the price of grains in the international market, which will in turn ease the inflationary trend on the price of food in the country.”

The minister also explained that about $35million dollars was being expected from the Mexican government from export of hibiscus flower used in zobo production.

He said under Rural Infrastructure Development, the ministry constructed 765.36 Km of Asphalt roads and 7.75km of earth roads, leading to 22,961 direct jobs and 765,360 indirect Jobs.

According to Abubukar, the government also provided 635 units of motorised/solar-powered boreholes and 25 hand pumps, leading to 13,585 direct jobs and 96,750 indirect jobs.

The minister said the government “installed 17,099 units of all-in-one solar streetlight, leading to 7,980 direct jobs and 113,993 indirect jobs being created;

“Constructed 15 blocks of three classrooms with 480 direct jobs being created.